Distinguished teacher invites his students to explore their world, faith 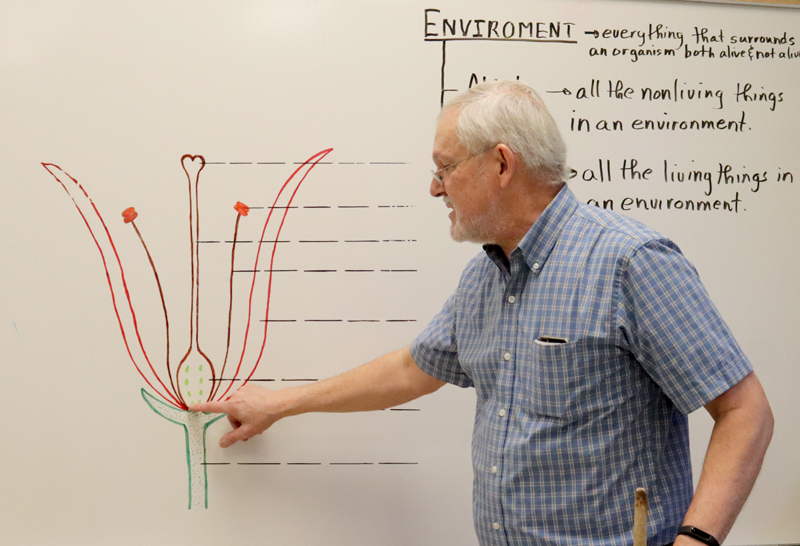 Jim Taber, who has taught at Central Catholic High School in Bloomington for 36 years and chaired the science department there for 35 of them, can't help but teach, even in conversation. Everything becomes a lesson in science and faith for the Distinguished Teacher of the Year. (The Catholic Post/Jennifer Willems)

BLOOMINGTON — Jim Taber can’t help himself. Conversation with him is filled with lessons in biology, chemistry, botany, math and physics and it’s done in such a joyful and spontaneous way that anyone listening will learn something and be happy to do it.

That’s a good thing for his students at Central Catholic High School, where he has taught science for 36 years and chaired the science department for 35 of them.

“God has found a niche for me and I’m sitting here helping kids be better than me,” Taber told The Catholic Post during a recent visit to his classroom. “That’s my goal — in some way or form I want them to be better than me.”

For the way he has loved and inspired his students, as well as shared his faith with them, Taber has been named the Distinguished Teacher of the Year by the Office of Catholic Schools. He will be honored at a Mass and luncheon on May 13, along with Dr. Noreen Dillon of St. Mark in Peoria, Distinguished Principal of the Year, and Msgr. Mark Merdian of St. Pius X in Rock Island, Distinguished Pastor of the Year.

“I was kind of stunned by this,” he said of the recognition. Noting that his alma mater, Normal Community High School, had also honored him with the Distinguished Alumni Award, Taber said, “These are biggies.”

He was quick to point out that there are a lot of great teachers working with him. He also credited Central Catholic principal Sean Foster and former principals Dick Morehouse and Joy Allen as “the people who have kept me going.”

“MY KIDS ARE GENIUSES”

Taber admitted that he struggled as a student and it’s information he shares with his students.

“When I first started teaching I took no education courses. I just knew the kids liked me and I loved my subject. . . . I had to come up with my own philosophy of education, which is ‘My kids are geniuses.’” — Jim Taber

“When I first started teaching I took no education courses. I just knew the kids liked me and I loved my subject,” he said. “I had to come up with my own philosophy of education, which is ‘My kids are geniuses.’”

“All of you are smarter than I am,” he tells them. “I was in the bottom 20 percent of my class my freshman year. If I can be as smart as I am, you can be a genius.”

Taber helps his students succeed by making sure he never embarrasses them. That means he doesn’t call on them if they don’t raise their hands, for example.

“Different emotions have an effect on your intelligence,” he explained. “If I embarrass you in the classroom, all of a sudden your ability to learn goes way down.”

What makes them more intelligent is an excitement in knowing something they just can’t hide, he said, and he counts on them to be their own cheerleaders.

Acknowledging that he teaches tough courses, Taber gives “equal credit” for specimens the students bring in with proper collection data. These include the hornets’ nests, branches, plants and other natural objects that fill his classroom.

One branch brought in from Canada shows the teeth marks of the beavers that stripped it of its bark and now serves as his favorite pointer.

Born in Paris, Illinois, Taber moved to the Bloomington-Normal area with his family when he was 11. He earned his bachelor’s degree in biological sciences at Illinois State University in 1972 and his master’s degree in 1976, and then began to pursue a doctorate — and something more.

Taber wasn’t raised in the Catholic Church and said by the time he got to college he wasn’t sure he believed in God at all. He kept that hidden from everyone so he wouldn’t harm their faith — until he met his future wife, Carrie, who was Lutheran.

They married in 1981 and before long, “God had given me faith.” They were still unchurched Christians when he started at Central Catholic, but said, “After four or five years I started to fall in love with the faith.”

“All of a sudden, Christianity made sense,” Taber said. “With Catholic teaching I thought, ‘This starts to make sense.’”

He loved being able to talk about God in the classroom and wanted that for his children, too. With the help of Father John King, the founding pastor of Epiphany Parish in Normal, the Tabers were able to enroll their children at Epiphany Catholic School and started their journey into the Catholic Church.

“He gave us so much care and love,” Taber said of Father King. “All of my kids are faithful to the church. Two of them teach theology!”

Katherine McEldowney does that at Central Catholic and Emily Taber Gutschick is at Creighton Prep in Omaha.

The Tabers also have a son, Charles, and two more daughters, Melissa Kimball and Becky Taber, as well as seven grandchildren.

Among the many students who have benefited from his faith and love of his subject is Scott Keogh. A 1987 graduate of Central Catholic, Keogh serves as the head of the Division of Ecology and Evolution at the Australian National University.

His parents, Steve and Mary Keogh, and their family honored the longtime teacher by donating $100,000 to establish the James Taber Endowment Fund for Science Education at the Bloomington high school in 2015.

At 69, health issues have caused Taber to slow down a bit, but he is committed to teaching until he’s 70. “I’ll play it by ear after that,” he said.

The Central Catholic administration is in no hurry to see him go.