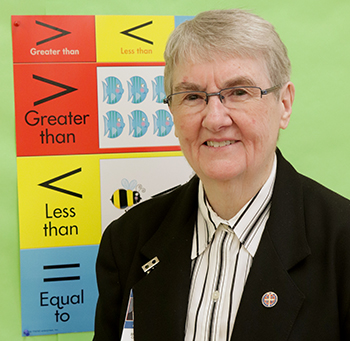 For most of her 55 years in Catholic education, Sister Janet Cassidy, OSB, taught first and second grade. Now she serves as the math interventionist at Seton Catholic School in Moline. "My life has been blessed," she said. (The Catholic Post/Jennifer Willems)

MOLINE — When Sister Janet Cassidy entered the Benedictine community at St. Mary’s Monastery in Nauvoo, she was willing to do whatever was asked of her. She just wanted to be a Sister.

“I did not intend to become a teacher. They must have seen something in me that I did not see in myself,” she said while sitting in the classroom she uses as a math interventionist at Seton Catholic School here. “I was just happy to do the dishes for the rest of my life.”

It was a good thing for her that someone did see that teaching skill, which she has devoted to Catholic education for 55 years. All but five of those years have been spent in Catholic schools of the Diocese of Peoria.

“It’s been wonderful. I’m so blessed, I really am,” Sister Janet told The Catholic Post. “I look back and I can see God’s hand in everything that I have done.”

She attended St. Bernard School, which was staffed by the Sinsinawa Dominicans, and then St. Mary’s Academy in Nauvoo, a ministry of the Sisters of St. Benedict. While the Dominicans got her thinking about religious life, it was the vibrancy and joy of the Benedictines that brought her into that community on Sept. 24, 1961.

Sister Janet didn’t forget about the Dominicans, however. She was known as Sister Dominic from 1962 to 1965. “You were named something new — it was a new beginning,” she said.

Sister Janet studied with her Benedictine community during the early part of her teaching career, going to St. Ambrose University in Davenport, Iowa, during summer breaks for the last 30 hours.

“I did not get my bachelor’s degree until 1972, but it was the best thing because I had the experience to go along with what I was learning in college,” she explained. “I brought more to my college experience than being right out of high school.”

“I have jobs at the monastery, but the kids keep you going. They keep you young,” she said.

When she approached Jane Barrett, principal at Seton Catholic, about coming back, she didn’t want a classroom. “I just wanted to be of assistance.”

For the last four years she has been working half days, providing a little extra help in math for students in kindergarten, first, second and third grade.

“It’s been a marvelous, marvelous life and mission,” Sister Janet said. “It’s a great responsibility and it’s also a great privilege to be able to influence a child’s moral compass at that age. It’s awe inspiring.”

She said that while she’s been able to give things to the students, what they’ve returned to her is “immeasurable.” That includes their love, affection, and friendship.

She is also filled with gratitude for her parents for making it possible for her to have a Catholic education and for her Benedictine community for their support and encouragement.

“If I died right now, I would have no regrets,” Sister Janet said. “My life has been blessed.”