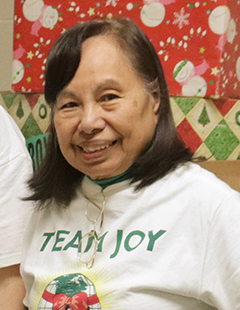 FROM ‘BOX OF JOY’ TO ‘SIMBANG GABI’

GRAND RIDGE — Giving thanks to God is all part of giving back for Nympha White, a member of St. Columba Church in Ottawa who also serves on the board of the Peoria Diocesan Council of Catholic Women.

As the PDCCW’s chair of international concerns, she has worked on the Cross Catholic Outreach’s Box of Joy project for two years, traveling to parishes around the diocese to gather boxes filled with toys and other treats for children in Haiti, Guatemala, Dominican Republic, Nicaragua and El Salvador.

“Doing the Box of Joy project takes a lot of one’s resources, time and effort,” White acknowledged, but said, “This is my thanksgiving to God, by making those poor kids happy this Christmas with something their parents can’t afford to give. I wish I could afford to give them more often.”

Her family has another tradition of prayer and thanksgiving, Simbang Gabi, that they brought with them from the Philippines. The Christmas tradition involves a series of nine Dawn Masses that begin on Dec. 16 and end with Midnight Mass on Dec. 24.

It is also known as “Misa de Gallo” or “Mass of the rooster” since it is celebrated very early in the morning.

“For years, my family who are parishioners of Notre Dame Church in Houston, Texas, always sponsor a novena Mass,” White said, with everyone taking a role in the liturgy.

“After the Mass, we serve breakfast for 200 or 300 people — Filipinos, Vietnamese, Koreans, Hispanics and Africans, who wear their authentic and fashionable outfits,” she said.

Each of her brothers and sisters and their families would cook two or three kinds of dishes for the feast. In addition to serving the food and drink, the family cleans up.

“They do this, too, in January for the Santo Niño feast day — there is also a novena Mass then,” White told The Catholic Post.

EAST MOLINE — Giving back has been a Christmas tradition for Lizette Desseyn for more than 40 years and that has made hundreds of children represented on the local Salvation Army Angel Tree very happy.

“I did it with my mother when I started out,” she told The Catholic Post. “Then one December I thought maybe my fellow employees would like to join in.”

Desseyn worked for the City of East Moline for 41 years, many of them as deputy city clerk. In 1980, she invited the International Association of Firefighters, Local 929, the Police Benevolent and Protective Association, and the American Federation of State, County and Municipal Employees, Local 1234, to make donations, which she used to purchase gifts for 20 children.

“Following my retirement in 1996, I continued this program for another 10 years. The last year, 2006, we purchased gifts for 168 children,” she said. “I was so proud of my fellow employees for their generous donations and the good feeling we all had when participating in this project.”

Since then she has continued to purchase clothing and toys for the Angel Tree, buying between 150 to 350 gifts each year. She includes some clothes, such as coats and holiday dresses, as well as toys for infants and children through 12 years of age.

She also collects items for abused women and children.

It’s something she thinks about in season and out of season.

That’s not why she does it, however.

“To this day I still get that special feeling one has when we decide to share our God-given blessings with others less fortunate,” Desseyn said. “God gave us his son at Christmas; so we need to give to others in imitation for his love for all people.”

A member of Christ the King Parish in Moline, Desseyn serves on the Social Concerns Committee and Funeral Luncheon Committee. In addition, she helps with the holiday bulletins.