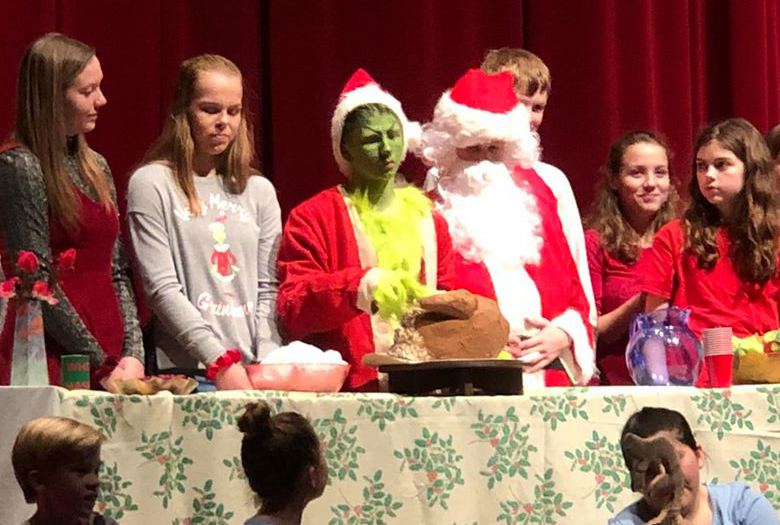 Surrounded by the Whos, Grinch Isaac Kidder prepares to carve the roast beast in a production of "How the Grinch Found Christ in Christmas" presented by St. Mary School in Metamora. It was one of many plays and concerts offered by Catholic schools around the Diocese of Peoria this year. (Provided photo)

As it turns out, the Grinch didn’t dislike Christmas at all, but was upset about how hypocritical people were about it. At least that’s the approach the students at St. Mary School in Metamora took when they presented “How the Grinch Found Christ in Christmas” on Dec. 16.

The Metamora school was one of many around the Diocese of Peoria that offered concerts, pageants, and plays in the weeks leading up to Christmas. The schools also found ways to incorporate service projects into their festivities so they could bring joy to people beyond their walls.

Following are some of the things the diocesan schools have been doing, according to information provided in response to an invitation from The Catholic Post.

GIVING BACK IN METAMORA

Erin Noble, who teaches history, literature, music and band to the middle school students at St. Mary, discovered “How the Grinch Found Christ in Christmas” on a resource sharing website for teachers and thought it would be an ideal way to bring all of those disciplines together. While the seventh- and eighth-graders had the main speaking roles, every student in the school got to sing or perform as extras.

The show, which was performed in the auditorium of Metamora High School, came together very quickly, Noble said.

“We only have music once a week, but the classroom teachers have been excellent,” she told The Catholic Post. “It’s fortunate that I’m the literature teacher for the middle schoolers because this goes along with drama. Drama is literature, so we’ve been using our literature time to rehearse.”

Because they’re talented and very vocal, she knew the students would enjoy being on stage and they did.

Instead of wrapping empty boxes for the Grinch to carry, students, school families and parishioners donated boxed food, which will be given to a local pantry. “So there’s a giving factor with this, which makes us more aware of the reason” for the season, Noble said.

Corpus Christi School, Bloomington: The kindergarten students will lead the school in prayer on the last day of school before the Christmas break. The Builder’s Club students went caroling and gave poinsettias to residents at Westminster Village, a retirement community.

St. Mary School, Bloomington: The students started early by accepting donations for service members overseas as part of Operation Santa Project. They have also been collecting pajamas for Project Oz, which assists mothers and children in need. Each day has begun with a Living Advent Wreath during morning assembly.

St. Edward School, Chillicothe: Students and their families participated in the annual Chillicothe Christmas Parade on Nov. 23. An Advent ceremony, organized by the eighth-graders and their teacher, Jeanne McGann, has been held each Monday morning. The annual “Spirit of Giving Christmas Shoppe” sponsored by the Parent Club allowed the children to buy gifts for their family and friends.

St. Mary School, Kickapoo: Students signed the story of the birth of Jesus at the Christmas program on Dec. 18. St. Nicholas visited at the end of the show. The school has also been collecting coats for the Salvation Army, along with toys for Santa’s Hospital Helpers to benefit sick children at OSF HealthCare Saint Francis Medical Center and Unity Point Methodist Hospital in Peoria.

Carroll Catholic School, Lincoln: Students in fifth through eighth grades knitted hats to be distributed by Holy Family Parish Food Pantry, and canned food was collected. There was also a Toys for Tots collection.

St. Paul School, Macomb: There has been an Advent prayer service every week so students can prepare their hearts for Jesus, and the sixth-graders painted the Nativity on the front window of the school. St. Paul families donated enough money to buy 17 coats for the Western Illinois Regional Council to distribute, and provided Christmas gifts for the 20 families they adopted. The students also collected canned goods for the local food pantry and the fifth-graders went to stock the shelves.

Epiphany Catholic School, Normal: The sixth-graders had a Christmas party with their pre-school Mass Buddies. The first-graders constructed gingerbread houses with their parents and grandparents, and there were four different Christmas concerts.

Holy Family School, Peoria: Students visited the Community Festival of Nativities and attended a performance of “The Nutcracker.” The second-graders presented “Las Posadas,” a Mexican tradition that commemorates the journey Joseph and Mary made from Nazareth to Bethlehem, searching for a place for Mary to give birth to Jesus. The children also went caroling at Proctor Home and collected toys for Neighborhood House.

St. Philomena School, Peoria: Candy canes were sold, with the proceeds going to a local organization. In addition, the Student Council hosted a toy drive.

St. Vincent de Paul School, Peoria: The third-graders collected Coats for Kids through the Salvation Army, and the Student Council has organized a canned food drive and candy cane sale, with the treats delivered to people at school or home. The canned goods and candy cane profits help to provide Christmas baskets for St. Vincent de Paul and St. Bernard parishioners in need.

Peru Catholic School, Peru: The pre-school students celebrated a birthday party for Jesus, and the fourth- and fifth-graders learned Jesus’ family tree by making a Jesse Tree. The Student Council has been leading weekly Advent services for the whole school and purchased gifts for two children through Catholic Charities. They also sent a “care package” to adopted seminarian Jack Watt. The athletic department sponsored a Toys for Joy drive at the basketball game on Dec. 18, with toys going to St. Jude Children’s Research Hospital in memory of Lily Rosploch.

St. Thomas School, Philo: Each classroom adopted a senior citizen from the Bradley Learning Center in Urbana and bought Christmas gifts for them.

St. Malachy School, Rantoul: A school-wide food drive in November brought in 618 items for the Rantoul Community Service Food Pantry, and the seventh-graders went to stock the shelves. The eighth-graders served as bell ringers for the Salvation Army and sang carols, as well as sorting toys for 381 children at the Community Service Center of Northern Champaign County.

Alleman High School, Rock Island: The Alleman Pioneer Singers have performed at a number of senior living and assisted living facilities in the area, including memory care units and rehabilitation centers. Alleman also presents a concert with students from their partner schools: Seton Catholic in Moline, Jordan Catholic in Rock Island, and Our Lady of Grace in East Moline.

St. Michael the Archangel School, Streator: In keeping with longstanding tradition, the eighth-graders presented a Living Nativity at the beginning of the Christmas program.

St. Patrick School, Washington: Students helped with Operation Christ Child and filled baskets for the Midwest Food Bank. Some of their Advent projects included making Advent wreaths, participating in a Living Advent project each day, and doing acts of kindness for classmates.