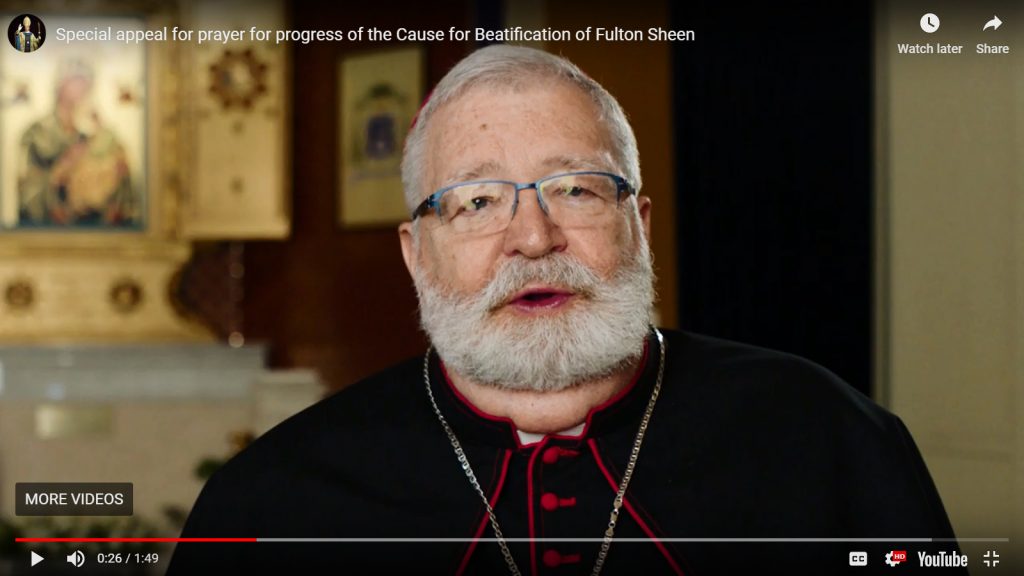 In this screen grab from YouTube, Bishop Daniel R. Jenky, CSC, invites participation in a nine-day novena starting on Dec. 12 asking God "to remove all obstacles" for the beatification of Archbishop Fulton J. Sheen. The novena, including text and daily videos and posted at celebratesheen.com, spread quickly around the globe. The bishop is shown in front of the tomb of the famed media pioneer, author and evangelist at St. Mary's Cathedral in Peoria.

Profoundly disappointed by the postponement of the scheduled Dec. 21 beatification of Venerable Archbishop Fulton J. Sheen, Bishop Daniel R. Jenky, CSC, called the faithful of the Diocese of Peoria and all those who love and admire the famed media pioneer and evangelist to prayer.

And the world responded.

A nine-day novena — led daily via video by Bishop Jenky — to “petition God unceasingly” that the beatification and canonization cause might advance was picked up by national Catholic news, television, and radio networks and spread around the globe via social media.

“I know how deeply saddened we all are about the postponement of the beatification of Fulton Sheen,” said Bishop Jenky in a video message to promote the novena released on Dec. 9 — the 40th anniversary of Archbishop Sheen’s death. Speaking in front of Archbishop Sheen’s tomb at St. Mary’s Cathedral in Peoria, the bishop announced the novena would run from the Feast of Our Lady of Guadalupe, Dec. 12, to Friday, Dec. 20.

“We believe in the power of prayer,” continued Bishop Jenky. “In these turbulent times when our faith is being tested, which even Fulton Sheen prophesied about, we need to remain faithful to prayer like Archbishop Sheen.”

The novena’s prayers and daily quotes from Archbishop Sheen were posted online at celebratesheen.com. Each day, new videos were added featuring Bishop Jenky leading the prayers in English and Msgr. Richard Soseman — vice-postulator for Archbishop Sheen’s canonization cause — leading them in Spanish.

As of Tuesday, they had been viewed hundreds of thousands of times with prayers being raised around the globe.

“I’m grateful to all the networks that have run it,” said Oscar Delgado, associate producer of the novena videos who has been a member of the Archbishop Fulton John Sheen Foundation for 17 years. Among them were the global networks of EWTN television and radio.

“It’s been an amazing outpouring,” said Delgado, a former network news producer for NBC News who now works out of Chicago and Rochester, Minnesota. “It’s just gone everywhere,” he said of the novena, adding that “a community has been built via television, radio and social media” that is now even more energized to see the beatification and canonization of Archbishop Sheen take place.

Among those enthused is Patricia A. Fason, executive director of the Florida-based Association of the Precious Blood of Jesus. The association sent the novena via email to its members in 95 nations.

“This novena has created a lot of buzz,” wrote Fason in a Dec. 15 letter to Debbie Benz, director of the diocesan Office of Development and Stewardship. “Folks who were ‘sleeping through’ the beatification of Fulton Sheen are now awake and engaged.”

Interviewed on Dec. 11 regarding the novena by Teresa Tomeo for “Catholic Connection,” a co-production of Ave Maria Radio and the EWTN Global Radio Network, Msgr. Jason Gray also observed that devotion to the Sheen cause is increasing.

“I’ve been encouraged by the positive reaction so many have had” to the novena, said Msgr. Gray, judicial vicar for the Diocese of Peoria and head of the beatification planning committee. “It’s at moments like this that we need to turn to the spiritual,” just as Archbishop Sheen modeled, he added.

Meanwhile, Bishop Jenky said in an interview with Drew Mariani for his show on Relevant Radio that uniting in prayer “seems to unlock in our hearts and souls an openness to the good that God always intends.”

The bishop, noting Archbishop Sheen’s “intense devotion to the Blessed Virgin Mary, said it was significant that the novena began on the feast of Our Lady of Guadalupe “so under her immaculate mantle we can . . . ask God to please raise up Fulton Sheen and pour out His blessings on his cause for beatification and canonization.”

The novena included a daily recitation of the official prayer for Archbishop Sheen’s canonization. The prayers were framed by quotes from Archbishop Sheen on topics such as devotion to Mary, the need for confession, and humility.

“How God will judge my life I know not,” began the Sheen quote for Day 1 of the novena, “but I trust he will see me with mercy and compassion . . . . When the record of any human life is set down, there are three pairs of eyes who see it in a different light: As I see it, as others see it, and as God sees it.”