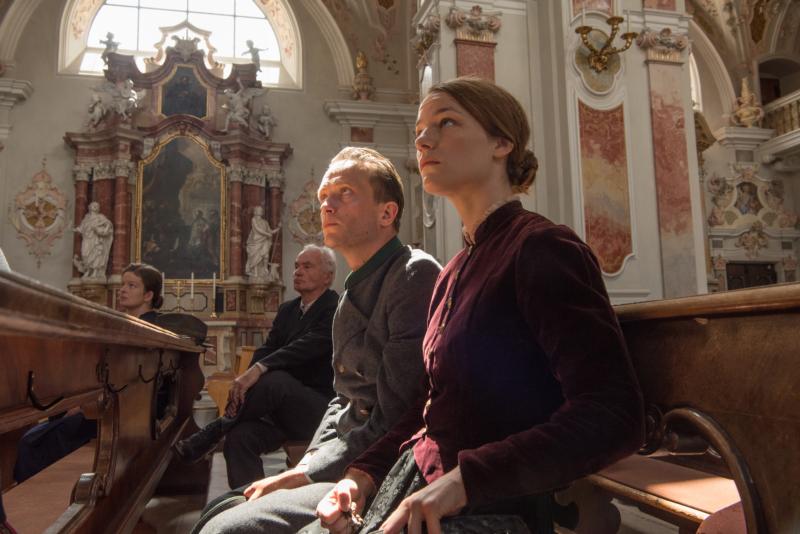 August Diehl and Valerie Pachner star in a scene from the movie "A Hidden Life." The Catholic News Service classification is A-II -- adults and adolescents. (CNS/Fox)

Luminous, though deliberately paced, fact-based drama recounting the events leading up to the 1943 martyrdom of Austrian farmer Franz Jagerstatter (August Diehl). Motivated by his deep Catholic faith, Jagerstatter, who was beatified in 2007, refused to swear the oath of loyalty to Adolf Hitler that was demanded of all those drafted into the Wehrmacht during World War II.

Writer-director Terrence Malick focuses on the happy home life his gentle protagonist sacrificed in order to be obedient to his conscience, especially his spiritual and emotional bond with his wife, Franziska, known as Fani (Valerie Pachner), under whose influence he first became serious about his religion. Beautiful both to look at and to contemplate, Malick’s film requires patience since it largely consists of scenes of ordinary domestic activities and farming chores, many of them overshadowed by the dread of what, at first, may lie ahead and later certainly does. Yet, by accretion, he builds a sturdy bridge of sympathy between the audience and the central duo, and his movie will be prized by believing viewers, its ambivalent portrayal of Jagerstatter’s parish priest (Tobias Moretti) and bishop (Michael Nyqvist) notwithstanding.

Mature themes, scenes of physical violence, an ambiguous portrayal of Catholic clergy. The Catholic News Service classification is A-II — adults and adolescents. The Motion Picture Association rating is PG-13 — parents strongly cautioned. Some material may be inappropriate for children under 13.