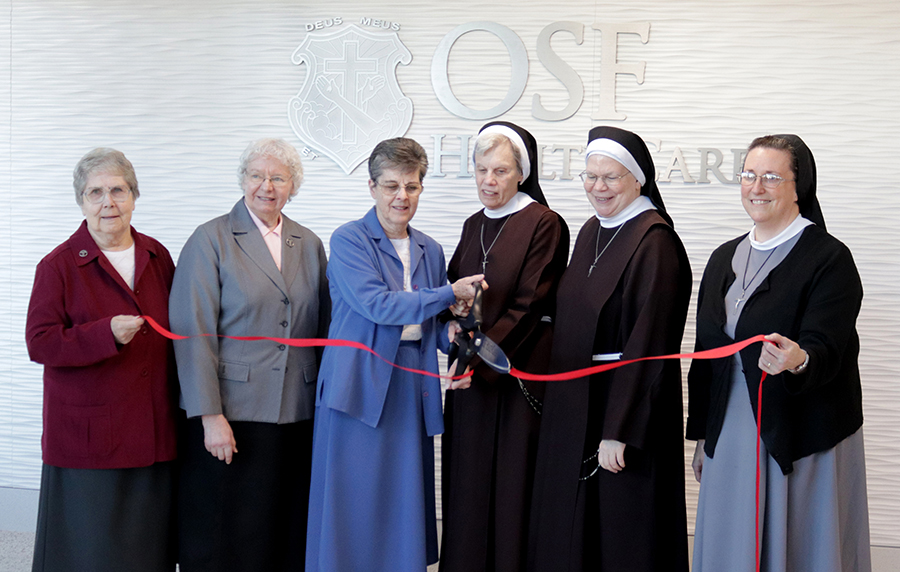 STREATOR — When there was a need for health care in Streator, the Hospital Sisters of St. Francis responded to the call. Arriving in 1887, they started St. Mary’s Hospital a year later.

The hospital closed in 2016 and has found new life as the OSF Center for Health – Streator, something that makes the Hospital Sisters of St. Francis thankful and happy, according to three of the Sisters who served as nurses at the hospital. 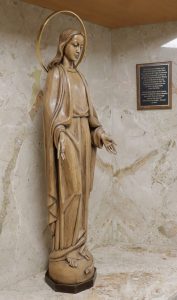 One of the many treasured pieces of art from the former St. Mary’s Hospital in Streator that has found a place of honor at the new OSF Center for Health – Streator is this hand-carved Italian wood statue of the Blessed Virgin Mary that was given to the hospital when it was dedicated in 1963 and graced the lobby until St. Mary’s closed in 2016. (The Catholic Post/Jennifer Willems)

“I think this is a wonderful eye-opener for all of Illinois,” said Sister Christa Ann Struewing, OSF, provincial vicaress. She worked as a registered nurse on the hospital’s adult medical and surgical floors in 1967.

“I’m pleased to see the hospital is going to continue to provide health care in a different way. I really wish the world to the Sisters who are putting this together,” said Sister Jomary Trstensky, OSF, chair of the Hospital Sisters Ministries Board. “I’m going to be following this model because we’re in health care in Illinois and Wisconsin and we’re interested in providing good care to people in rural communities.”

Sister Jomary, who opened the first intensive care unit at St. Mary’s Hospital, added that the Sisters of the Third Order of St. Francis had promised to respect her community’s tradition and honor the past, and said that had been done.

Among the sacred objects that have been incorporated into the Center for Health, for example, is a hand-carved Italian wood statue of the Blessed Virgin Mary that was given to St. Mary’s Hospital when it was dedicated in 1963 and displayed in the lobby until 2016. It now has a place of honor in the main hallway of the new facility.

Another statue of Mary that had been in a grotto on the south side of the property — one of the few places the Sisters could find refuge on busy days — has been refurbished and sits at the entrance to the new entrance for community education.

“They took the time to find out what would have meaning and those items are all around the property,” Sister Jomary said, praising the Sisters of the Third Order of St. Francis, which owns and operates OSF HealthCare. “I’m assuming they will have meaning for some of the citizens of Streator, too.”

Sister Maureen O’Connor, OSF, provincial superior of the Hospital Sisters of St. Francis, worked in pediatrics at St. Mary’s Hospital from 1970 to 1973. “It was my first assignment after I got out of school, so I always said I left a little piece of my heart here in Streator,” she told The Catholic Post.

She said she appreciated seeing what her community had begun being carried on by the Franciscan community from East Peoria, offering “something new and different to the community for their health.”