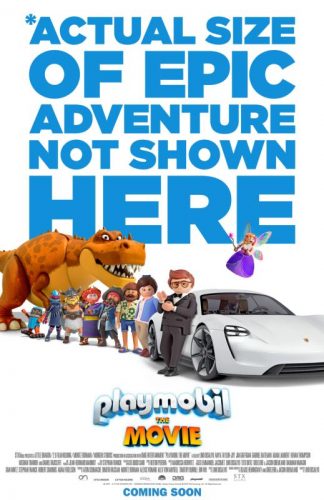 This is a poster from "Playmobil: The Movie." The Catholic News Service classification is A-II -- adults and adolescents.(CNS/STXfilms)

Four years after their parents were killed in a car accident, a formerly free-spirited teen girl (Anya Taylor-Joy) and her fun-loving younger brother (Gabriel Bateman) are at odds because of her overprotectiveness. But after they’re magically transported to a world inhabited by the titular line of toys, and he is kidnapped, she embarks on a quest to rescue him. She finds an unlikely ally in the form of a laid-back food truck driver (voice of Jim Gaffigan) and also is aided by a James Bond-like spy (voice of Daniel Radcliffe).

Mostly animated, but bracketed by live-action sequences, director Lino DiSalvo’s meandering musical adventure, which also features voice work by Adam Lambert as a loony Roman emperor, is too frightening for tots and strays momentarily into some questionable dialogue. Still, themes of teamwork, friendship, family bonds and forgiveness go some way toward compensating for its obvious aesthetic shortcomings.