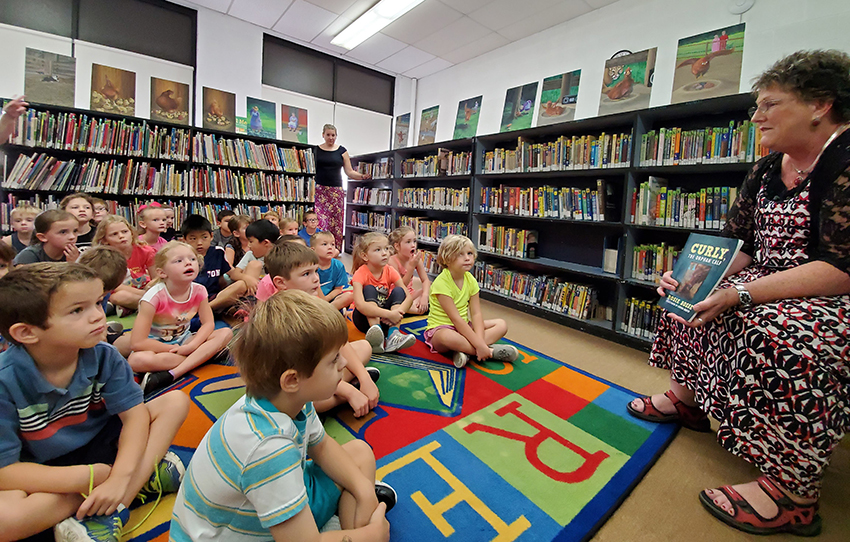 Author Rosie Bosse talks with students of St. Paul School in Macomb about farming, her book, "Curley, the Orphan Calf," and her son, seminarian Austin Bosse, who served at the Macomb parish over the summer. She also visited Immaculate Conception School in Monmouth and read to the students there. Provided photo

MACOMB — As seminarian Austin Bosse served at St. Paul Church here over the summer, the parish families fell in love with him and the children grew a little bit closer to God as he guided them through the ins and outs of being altar servers and helped with Totus Tuus.

The connection grew even stronger when they discovered that his mother, Rosie Bosse of Onaga, Kansas, is the author of several popular children’s books based on life in a rural community. She was quickly invited to visit St. Paul School and after reading “Curley, the Orphan Calf” to the students, the parish community gave their hearts to a second member of the Bosse family.

“The illustrations are amazing and there’s not a dry eye when you read the story,” said principal Laura Cody. 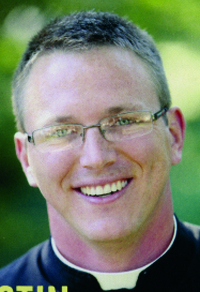 “This was such a cool experience for the kids. They loved it and it had double meaning because of Austin,” she told The Catholic Post. “It was pretty special for us.”

The sentiment is echoed by Rosie Bosse, who said she loves to visit schools and read to the children. In fact, it was her 12 grandchildren who inspired her to start writing.

“They pile on my lap and say, ‘Grandma, tell us a story,’” she says with a laugh during a phone interview. “I ask them what they want and it’s usually one about a dog and the dog has puppies and they have these wild and crazy adventures.”

Now she has published two books about canines, “How Clicker, the Dog, Got His Name” and “Clicker Finds a Mate.”

Another time they asked for a story about a chicken. “I just think chickens are the silliest animal ever created,” she confessed with another laugh, but now her grandchildren and many other youngsters can read about “Gertrude, the Loud Chicken.”

“They love Gertrude and Gertrude has had quite a few adventures,” Bosse said. “The kids couldn’t wait for ‘Gertrude’ to come out.”

“Curley, the Orphan Calf” was inspired by wildfires in southwest Kansas. Being a cattle rancher’s wife for 40 years gave her the necessary background to write with authority and compassion about Curley’s fate. Although it was intended as a stand-alone book, Bosse has just published a sequel, “Curley, the Hero Cow.”

While the subject matter can be serious at times, “I promise that all the books have a happy ending,” she said.

The illustrator for her books is neighbor Cynthia Martin, who creates 11 images per book. One of them also serves as the cover art.

Bosse said she always got high marks for writing in school, but doesn’t remember a teacher ever saying, “You need to look into that.”

“It was my daughter, after I had the grandkids and started telling them stories, who said, ‘Mom, you need to write these down,’” she recalls, and it only takes about three hours when everything is going well.

Bosse has also written historical novels, the latest being “North to Cheyenne: The Long Road Home.”

Her visit to St. Paul School in Macomb inspired the students to think about taking up their pens, Cody said.

“They immediately went back to the room and they were all writing stories and drawing pictures and making books,” she told The Post. “So we’ve had lots of books being made around here, which we love.”

Perhaps the happiest ending of all is that Austin Bosse, the youngest of her four children, is in his third year of theology studies at Mount St. Mary’s Seminary in Maryland. He continues to be “our special seminarian” at St. Paul in Macomb.