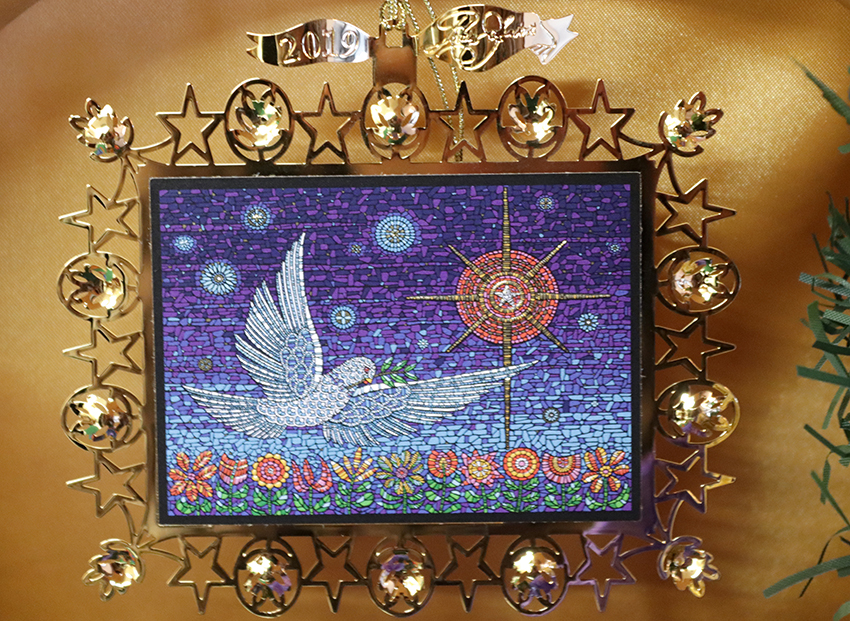 The 2019 Rolan Johnson ornament being sold by the Sisters of St. Francis of the Immaculate Conception is based on the 1985 Christmas card created by the Peoria artist and printer. The title of the collectible ornament is "There Is a Peace." (The Catholic Post/Jennifer Willems)

WEST PEORIA — For many years, Rolan Johnson’s elaborate, colorful Christmas cards reminded people what the season was really all about. While the Peoria artist and printer is gone, the tradition lives on in collectible ornaments based on his artwork and sold to benefit the retirement fund of the Sisters of St. Francis of the Immaculate Conception.

This year’s ornament, “There Is a Peace,” is the 25th in the series and Sister Kathleen Ann Mourisse, OSF, president of the Franciscan community, said it is a privilege to be able to share this beauty year after year. 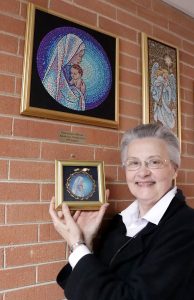 Sister Kathleen Ann Mourisse, OSF, president of the Sisters of St. Francis of the Immaculate Conception (Heading Avenue Franciscans), holds the Rolan Johnson ornament that she has hanging in her room. Titled “Behold Jesus . . . the Gift of God,” it was the cover of his 1996 Christmas card and the 1997 ornament sold to benefit the Sisters’ Retirement Fund. (The Catholic Post/Jennifer Willems) 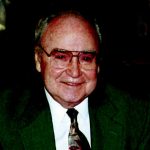 “They end up spreading the beauty of Christmas, the beauty of his artwork, the beauty of the message of Jesus’ birth,” she told The Catholic Post, noting that it has an impact on new people every year. “It’s been quite a gift.”

Sister Kathleen Ann credited Madonna Maloney for the partnership. She was director of development for the community — also known as the Heading Avenue Franciscans — when she approached Mr. Johnson with the idea of using his designs for the ornaments.

He agreed and granted exclusive permission for the Sisters to use his Christmas card prints to raise funds for their retirement.

The first ornament was released in 1995 and titled “Rejoice!” That ornament and each one that followed are displayed at Immaculate Conception Convent, along with the artwork on which they are based.

After Mr. Johnson died in 2000, his family allowed the Heading Avenue Franciscans to continue the series in his memory.

“This whole thing was a gift to God anyway,” said Fred Johnson, who succeeded his father at Rolan A. Johnson Company Inc. in Peoria. “For them to make money for their retirement, it just seemed like a perfect fit.”

To make certain they are ready each fall, the process of creating the new ornaments begins as early as February.

The Heading Avenue Franciscans meet with Fred Johnson and members of the family, as well as Greg Owens of Owens Design Group of Chillicothe to look at the different Christmas cards and consider what might be the best one in terms of shape and color for the new ornament. That includes determining if the design can be reduced in a way that still allows the artwork to shine.

A 24kt. gold-plated brass frame must also be designed for the ornament, Sister Kathleen Ann said.

Each one is boxed with a numbered certificate of authenticity.

“Usually when we have our assembly at the beginning of June we show our Sisters what the ornament will be,” she said. “But it’s always a big secret. We don’t let anyone else know until the unveiling, which takes place in September.”

That happens in the chapel during a prayer service, with one of the local priests offering a reflection and blessing, according to Sister Kathleen Ann. Copies are given to those who have been instrumental in the process and a luncheon for major donors follows.

An art teacher before she was elected to serve as president of the Heading Avenue Franciscans, Sister Kathleen Ann said she loves the art piece of the process. 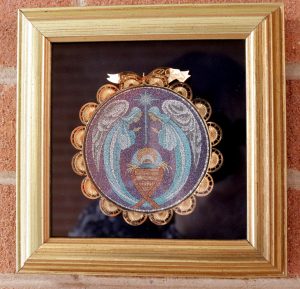 The first collectible ornament created in collaboration with Rolan Johnson is titled “Rejoice!” It was released in 1995. (The Catholic Post/Jennifer Willems)

“They’re just incredibly beautiful and to know how much skill it took on Rolan’s part to produce these cards — the color and the texture. That part definitely touches my heart,” she said.

Fred Johnson told The Post it took an average of 12 colors to bring the cards to life, with each layer added a day at a time. They had to have time to dry before the next color could be added, which accounts for the mosaic quality of the cards.

He said he likes the way the collectible ornaments honor his father and keep his memory alive.

“It seems like every year when the Sisters are doing this it is a big deal,” Fred Johnson said. “We appreciate all the attention my father is given at that time of year. . . . It is an emotional thing for me.”

The Rolan Johnson ornaments are available throughout the year at Immaculate Conception Convent and may be purchased through December at a variety of gift shops and religious goods stores in Peoria and the Bloomington-Normal area. Orders may also be placed by visiting westpeoriasisters.org.

Members of the Heading Avenue Franciscans will also be visiting parishes to sell the ornaments and visit with parishioners, so check your bulletins.