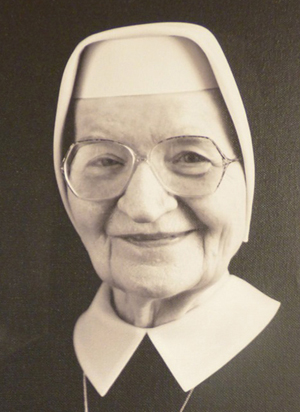 LACON — A Mass of Christian Burial will be offered for Sister M. Cornelia Blasko, DSF, on Saturday, Nov. 2, at the convent of the Daughters of St. Francis of Assisi, 507 N. Prairie St. It will begin at 10 a.m. and be celebrated by Bishop Edward Rice of the Diocese of Springfield-Cape Girardeau, Missouri.

Visitation will be held one hour prior to Mass.

Burial will be in Immaculate Conception Cemetery in Lacon.

Sister Cornelia died on Oct. 30, 2019, at St. Joseph Nursing Home in Lacon. She was 94 and had been a member of the Daughters of St. Francis of Assisi for almost 80 years.

Born in Binovce, Trnava, Slovakia, on Sept. 7, 1925, Sister Cornelia was the daughter of Stephen and Cecilia (Petrocova) Blasko. She followed her sister, Sister Consolata, into religious life when she was 15 and professed her own vows in 1943.

Three years later she would join 14 other Daughters of St. Francis of Assisi in crossing the Atlantic Ocean to establish the religious community’s American Province. They settled in central Illinois, founding St. Joseph’s Nursing Home in Lacon, but extended their mission to Mountain View, Missouri, in 1956.

Sister Cornelia was among the Sisters who worked to reopen what is now Mercy Saint Francis Hospital in Mountain View. She would dedicate more than 55 years to health care ministry — 42 of them as a hospital administrator.

Sister Cornelia was preceded in death by her parents, one sister and two brothers. Surviving is one brother, Sylvester Blasko of Binovce, Trnava, Slovakia, and her sisters in Christ, the Daughters of St. Francis of Assisi.