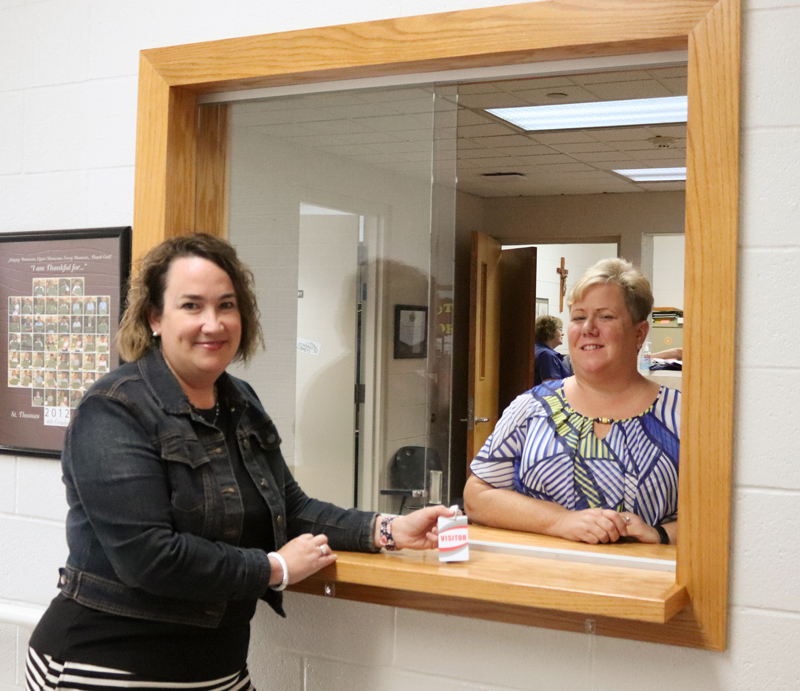 Maureen Bentley (left), principal at St. Thomas the Apostle School in Peoria Heights, and Angie Robenstein, secretary, demonstrate how visitors are welcomed at the new window that was installed between the exterior and interior doors. Bentley said almost all school business can be handled here, without anyone entering the school. (The Catholic Post/Jennifer Willems)

Emergency preparedness isn’t a luxury for schools these days. It can mean the difference between a good resolution to a bad situation and utter tragedy.

Dr. Sharon Weiss, superintendent of schools for the Diocese of Peoria, preferred to err on the side of caution two years ago. With the permission of Bishop Daniel R. Jenky, CSC, she hired Lt. Steve Roegge, now chief of police for East Peoria, and Lt. Jon Quast of the Peoria County Sheriff’s Office to visit each of the 42 Catholic schools and do a threat assessment.

It took a little more than a year to accomplish, since Roegge and Quast were working on their own time and the diocese is spread across 26 counties. In addition, Weiss wanted the pastor and principal to be involved in the assessments.

“That way they heard the same things and could have their questions answered,” she said.

In many cases, local law enforcement was also involved in the discussion.

Most of the visits lasted about three hours and resulted in a report for each school and church, if applicable, including a survey of the exterior, main entrance, office entry and visitor control, as well as common areas, such as the cafeteria, library and gymnasium. Photographs documented the team’s findings.

“This was state of the art,” Weiss said. “They knew their stuff.”

“I was assured that the schools were doing all they could to cooperate with the local authorities,” she added, noting that this is important since every jurisdiction is different.

While they didn’t want to “step on any toes,” Roegge and Quast nevertheless found several common issues and made suggestions to resolve them.

The first common theme was entrance doors and controlling access to the school building. The report said this is “the first layer of protection that prevents a threat from unauthorized entry and/or entry for an unlawful purpose.” 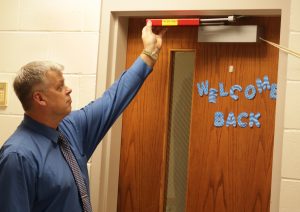 Wayne Brau, principal at Visitation Catholic School in Kewanee, demonstrates how entry into a classroom can be prevented by slipping a “sleeve” over the door closer. (The Catholic Post/Jennifer Willems)

This was a priority at Jordan Catholic School in Rock Island, according to principal Jacob Smithers.

He said four of the doors to the school were typically open during the day when he arrived four years ago. They added a security system with keypad so they were able to lock the doors once school started and now those who work for the school have key fobs that allow them access to the building.

“Every door locks down at 8 o’clock in the morning and they don’t open again until dismissal time,” Smithers said. “The only way to get in is through the front door.”

Sixteen cameras have been installed on the interior and exterior of Jordan Catholic, and one is specifically trained on the front door so office staff can see who is there. The main camera and DVR are located in Smithers’ office and record on a 14-day loop.

At St. Thomas the Apostle School in Peoria Heights, Roegge and Quast suggested that a window be installed between the front exterior doors and the interior doors at the top of the staircase. Both sets of doors are locked.

“The gist of it is that we like to do as much as we can from the window,” said principal Maureen Bentley. “We have trained our parents to understand that in the culture that we’re living in right now, we ask them to follow our rules and guidelines, just to try to keep and maintain the greatest amount of safety that we can.”

For the most part, the only parents who come into the building are those walking their pre-school children to class. All other students line up by grade level after being dropped off in the back parking lot and wait for the teachers to come and get them, she explained.

Since all the doors are locked, families who arrive late are asked to drive to the front entrance and have their children ring the doorbell for admittance.

Visitors in all schools are directed to the main office to sign in and receive some sort of badge or sticker that identifies them as a visitor. At St. Thomas the Apostle, for example, teachers are instructed to ask why visitors are in the building if they aren’t wearing this identification.

“We want people to feel welcome here. We just want them to understand that we’re trying to keep everyone as safe as possible.” — Maureen Bentley

“Certainly we don’t want anyone to get the sense they’re not welcome,” Bentley told The Post. “We want people to feel welcome here. We just want them to understand that we’re trying to keep everyone as safe as possible.”

That includes the community at large. Fifty video cameras were installed in the school and church and around the campus at the Peoria Heights parish. When there was an incident at the bus shelter on the corner, St. Thomas the Apostle was able to provide video footage to the Peoria Heights Police Department.

Because churches play an active role in Catholic school life, Roegge and Quast looked at safety concerns for them, too.

“A new practice this year is when students are in church to celebrate Mass, the church is locked except for one door,” according to Wayne Brau, principal of Visitation Catholic School in Kewanee. He supervises who comes and goes or designates another school official to do it.

Brau added that they follow all safety drills and have sheets for fires, tornadoes and other emergencies posted in each room.

It wasn’t long after classes started at St. Philomena School in Peoria that the need for this training became apparent.

Principal Jack Dippold said that while students were being dropped off on Aug. 29, one of the parents called in an alert that shots had been fired in the neighborhood. Sirens could be heard and two or three minutes later, a police officer pulled up to the front entrance of the school.

“We defaulted to them at that point,” Dippold explained. “It was a unique situation. The kids aren’t in the building, but they’re already getting out of cars, so we were kind of stuck in terms of what we wanted to do.”

“Schools of old where people can come and go as they want and it’s a safe environment where you trusted everybody, unfortunately that isn’t the case anymore. We know that safety’s first, no matter what.” — Jacob Smithers

The officers advised them it was best to go ahead and get the students into the building and then call for a soft lockdown. This means that students can continue to move around within the school, but no one is allowed to enter or leave the building.

“All of our doors are locked anyway and we’ve trained our kids that you never open the door for an adult, even if you know who they are,” Dippold said. “So when we’re in soft lockdown we don’t have to teach the students anything different from our usual procedures.”

A hard lockdown comes when there is an intruder or dangerous situation in the building. This requires more training because students must go to a certain area of their classroom and remain silent.

Safety drills for storm, lockdown, fire and bus emergencies were conducted during the first week of school, so Dippold said it was fresh in everyone’s mind.

“We just want to make sure that the kids’ minds are at ease — ‘You’re in the building and you’re safe. We’re keeping you safe.’ So there’s no panic,” he said.

The soft lockdown on Aug. 29 ended less than an hour later. That evening, Dippold asked one parent what their child had said about what happened and was told the student didn’t mention it at all.

“For us that’s kind of a win because that means the kids were safe. They didn’t have any idea of what was going on and there was no word that they were scared or anxious or nervous,” he said.

“Schools of old where people can come and go as they want and it’s a safe environment where you trusted everybody, unfortunately that isn’t the case anymore,” Smithers said. “We know that safety’s first, no matter what.”

Weiss said the attention which the Office of Catholic Schools placed on school safety will continue as one of the targeted initiatives for this current academic year.

She told The Post that Lt. Marilyn Robinson, a recently retired officer of the Peoria Police Department, has been hired to work part time to assist the diocesan director of safe environment with compliance protocols.

Robinson will also assist the Office of Catholic Schools and continue the work of Lt. Roegge and Lt. Quast by reaching out to the administrator of each school in order to review the threat assessment reports from 2017-2019 and to serve as a resource for safe schools in the Diocese of Peoria.