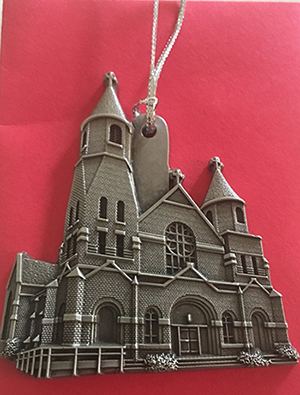 This pewter Christmas ornament in the image of St. Joseph Church in Ivesdale will be for sale at the parish’s 150th anniversary celebration on Sunday, Nov. 3.

IVESDALE — When members of St. Joseph Parish here gather on Sunday afternoon, Nov. 3, their primary purpose will be to give thanks to God for 150 fruitful years of parish life.

That’s reason enough to celebrate, especially given the rich history of this parish that formed in a region known as “Little Ireland” and produced more than 50 vocations to the priesthood, religious life, and permanent diaconate.

But the gratitude won’t stop there.

The 3 p.m. Mass of Thanksgiving — to be celebrated by Father Joel Phelps, vicar of the Champaign Vicariate — is also serving as the rural parish’s annual Harvest Mass. It will include a blessing of the fruits of this year’s harvest which, because of late planning, is likely to be continuing in some area fields.

The Mass will be followed by a catered dinner in the parish hall. The public is invited to both the Mass and dinner. Reservations are not required.

“We’ll have plenty of food,” promised Deacon Jim Brewer, a lifelong member of St. Joseph Parish who has served as its permanent deacon since his ordination in 2013.

Deacon Brewer said the day is extra special for one more reason: Nov. 3 is the 50th birthday of Father Fredi Gomez Torres, who has served as pastor here for the past two years. Father Gomez Torres will concelebrate the Mass along with former pastors and other priests from the region. 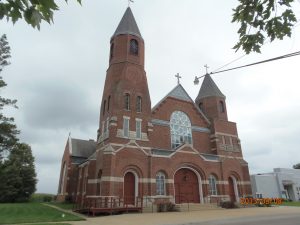 “The parish has put in time and effort to make this good for the community,” said Father Gomez-Torres, noting the date was one of several submitted to the diocese for approval. But because it is also his birthday, some of Father Gomez-Torres’ siblings visiting from Mexico are expected to be among those in attendance.

At the St. Joseph’s anniversary dinner on Nov. 3, orders will be accepted for a parish photo history book. In addition, pewter Christmas ornaments marking the occasion will be available for purchase.

“BEAUTY OF A SMALL PARISH”

Ivesdale is a village of about 300 residents located between Champaign and Decatur along the border of Champaign and Piatt counties. It is also among the most southern of parishes in the Diocese of Peoria, with some of its 80 households residing in neighboring communities that are in the Springfield Diocese.

The parish has seen a lot since the mid-19th century when priests would travel by horse and buggy from Champaign to celebrate Masses in area homes.

The first church, a rectangular building of wood, was built in 1869 — eight years before the establishment of the Diocese of Peoria — by Father Patrick Toner, who would also oversee the construction of churches in nearby Tolono and Bement.  It would serve the parish for its first 25 years.

The laying of the cornerstone for the present church was a major day of celebration in Ivesdale, with a parade through the village and a dinner attended by more than 2,000 people. The brick edifice — with two towers, one rising 80 feet and the other 105, and stained glass windows imported from Italy — was dedicated in 1894.

Through the years the parish has:

The parish has an active Altar and Rosary Society and its own Knights of Columbus Council, Immaculate Conception Council No. 1047.

“This is a very close-knit, faith-filled community,” said Deacon Brewer. “Everyone truly cares about one another. That’s the beauty of a small parish.”