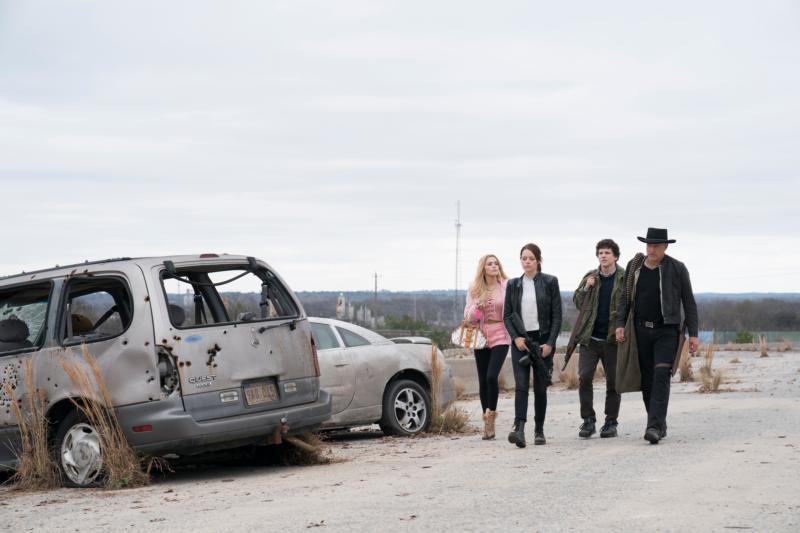 Follow-up to the 2009 horror-comedy combination charts the further adventures of the original’s central quartet — Jesse Eisenberg’s amiable nebbish, Woody Harrelson’s macho gunman, Emma Stone’s commitment-averse loner and her fancy-free sibling, played by Abigail Breslin — as they continue to fight for survival in a post-apocalyptic world overrun by flesh-craving zombies. When Breslin’s character and her new hippie boyfriend (Avan Jogia) suddenly depart on a road trip to Elvis Presley’s Graceland, the remaining trio, fearing for her safety, embarks on a quest to catch up with her. They’re joined by a ditzy blonde (Zoey Deutch) and eventually aided by a tough-as-nails hotel owner (Rosario Dawson), the former a complicating factor in Eisenberg’s strained romance with Stone, the latter a potential perfect match for Harrelson.

Though the moral trend in returning director Ruben Fleischer’s film is toward marriage and loyalty among pals, casual sex is winked at along the way, as is pot smoking, while the script is littered with crudity and displays a subtle disdain for faith. Throw in the gleefully gruesome mowing down of the undead inherited from the kickoff, and the whole proves beyond endorsement.