After 75 years of marriage, Aledo couple still walks through life ‘hand in hand’ 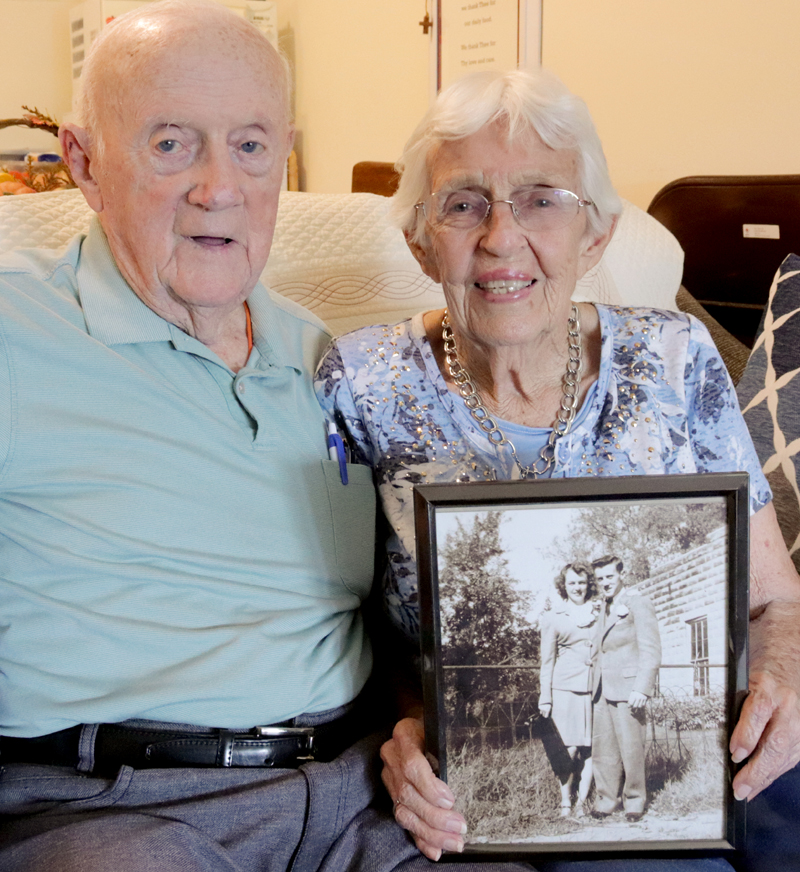 Sitting on the couch in their cozy apartment at Brookstone of Aledo, Paul and Lorene Lee pose with a photo of the happy day 75 years ago when they were wed at St. Patrick Church in Raritan. They will celebrate their milestone anniversary at a Mass at St. Catherine Church in Aledo and family dinner on Oct. 5. (The Catholic Post/Jennifer Willems)

ALEDO — After 75 years of marriage, Paul Lee still knows how to make his bride, Lorene, blush with joy.

“She’s an amazing person,” he said, smiling and pointing to her.

“It takes two,” she replied.

The blessings that have flowed from their loving commitment are almost too numerous to count, but many of them will join the Lees at St. Catherine Church here on Saturday, Oct. 5, as they celebrate their milestone anniversary. A family dinner will follow for as many of their 14 children, 43 grandchildren, 15 great-grandchildren and three great-great-grandchildren as can make it.

The family will also mark the birthdays of the couple that started it all on Oct. 6, 1944, which was the bride’s 18th birthday. Her groom turned 21 four days later. No word yet on whether there will be a cake large enough to hold 93 candles for her and 95 candles for him this year.

Having moved into assisted living two years ago, the Lees don’t need much in the way of presents.

“God has been good to us,” Paul says.

“TIME WENT BY SO FAST”

Paul was born and raised on a 240-acre farm near Raritan. Eventually the family made its way to Oquawka for work during World War II.

Lorene’s father worked as a hired man, taking jobs in Keithsburg and Oquawka. They settled in Oquawka when she was in the seventh grade.

“Somehow we managed it all. Sometimes we’d be going two different ways. . . . It seems like the time went by so fast, when I think about it.” — Lorene Lee, on parenting 14 children

It was a blind date that brought Paul and Lorene together for a movie in Fort Madison, Iowa. “It wasn’t too exciting,” she said with a laugh.

But there was something there.

“I think we thought we might like each other,” she told The Catholic Post. “We dated now and then and got a little serious about the thing.”

Lorene was raised in the Methodist faith, but became Catholic to marry Paul at St. Patrick Church in Raritan. Over the years they have been active in their faith communities, even helping to build Holy Redeemer Church in Barry when they lived in New Canton.

Longtime members of St. Catherine in Aledo, Paul served as a trustee and Lorene helped with funeral luncheons, among other things. When it was their turn, the 10 Lee boys were altar servers.

The Lees tried to go to every event in which their children were involved. They liked sports, but that was OK because so did Paul and Lorene.

“Somehow we managed it all. Sometimes we’d be going two different ways,” she said. “It seems like the time went by so fast, when I think about it.”

Lorene said having that many boys in one house could have been a challenge, but she took the advice of Father Clarence Meyers, longtime pastor.

“He was such a character, such a nice priest,” she recalled. “He said, ‘Lorene, don’t worry about them. They’ll knock the rough edges off of each other.’ I think it was true.”

It also helped that their children liked nothing better than being together, Lorene said. “They loved each other. There’s never been any friction about this or that.”

They also knew how to work, Paul said. The young Lees ran an ice house, carried newspapers, and had a stand at the Mercer County fairgrounds and park.

When all the kids were in school, Lorene was urged to go back to school herself by her daughter. Earning an associate degree in liberal arts at Black Hawk College, she took a job as a probation officer for Mercer County. It was a job she learned “from the ground up” and would keep for 10 years.

Paul worked as a depot agent for the Burlington Railroad, visiting many of the small towns in western Illinois. “I met a lot of good people,” he said.

He retired after 40 years, but wasn’t ready to sit back, so he served as the Mercer County coroner for 10 years.

While young couples today seem inclined to separate if some little thing doesn’t work out, Lorene said, “We never thought about quitting. Divorce wasn’t common at all.”

“There’s a little song that reminds me of us: ‘Through laughter and tears, we spent many years; Going through life, hand in hand,” she said.

Some of those tears came four years ago when they lost a daughter and shortly after that a 5-year-old great-grandson. Still, they know how lucky they’ve been.

“God has been good, very good, or we wouldn’t be here today, I guess,” Lorene said.