Before it was announced in early summer that the remains of Venerable Archbishop Fulton J. Sheen would be transferred from New York to Peoria — and before the miracle attributed to his intercession was approved, paving the way for beatification — the museum that bears his name at the Spalding Pastoral Center was already undergoing a “facelift.”

“When we started, we didn’t know he was coming home,” said Sister Lea Stefancova, FSJB, a diocesan archivist and caretaker of the museum, which has been part of the pastoral center since its opening in 2008.

The additions — including new glass display cases and monitors with eight different photo slideshows — are being appreciated by the increasing number of visitors, many of whom combine a stop at the museum with a visit to the tomb at St. Mary’s Cathedral just two blocks away. 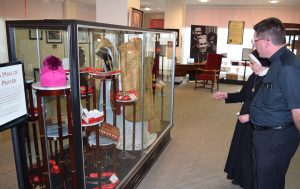 The most visible of the glass display cases is a large one that formerly belonged to a member of St. Mary Parish in Westville and was donated by Father Timothy Sauppe, pastor. Positioned near the entrance, it holds a variety of vestments and liturgical items identifying Archbishop Sheen as “A Man of Prayer.”

The visitors enjoy not only the museum’s plentiful artifacts from — and information about — the life of the famed radio and television evangelist, author, and promoter, but many will stay for the entire viewing of the documentary “Archbishop Fulton Sheen: Servant of All” that plays in a continuous loop on a large television screen surrounded by comfortable sofas and chairs.

“People hear it, and the voice draws them in,” said Sister Lea of the documentary, which is offered for sale.

Just as at the Sheen tomb (see related story), the visitors share stories of their connection to Archbishop Sheen. “We used to watch him” is almost like a greeting, said Sister Lea, adding that young people know him from YouTube, social media, or EWTN.

Many comment on the museum’s beauty. “A lady here yesterday said ‘I knew it would be nice, but I didn’t expect it to be this nice,’” said Sister Ann Gill, FSJB, also a diocesan archivist.

For more on the museum, including hours and group tours, visit cdopmuseums.org.