The ‘JMJ’ on the blackboard

“As a custom which started in kindergarten, I always wrote ‘JMJ’ at the top of the blackboard, as I do on every piece of paper before I write — and which I hope will someday be on my tombstone. In answer to many letters, the public finally recognized me and the words Jesus, Mary, and Joseph.” — From “Treasure in Clay: The Autobiography of Fulton J. Sheen”

Most artists sign their work with their own initials, but when Bishop Fulton Sheen turned to the blackboard while filming episodes of “Life is Worth Living,” he didn’t write “FJS.” Instead he used the chalk to scrawl the letters “JMJ.” A habit he learned from the Sisters who taught at St. Mary’s Cathedral School in Peoria, what was first written on childhood homework later became synonymous with Fulton Sheen’s own lectures. This act of calling to mind the guidance of Jesus, Mary, and Joseph at the very beginning of his talks demonstrated that he knew his work was not reliant on his own talent but was completely dependent on the power of God. 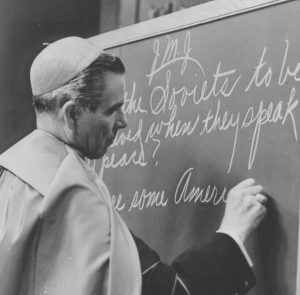 Archbishop Sheen wrote and spoke of the Holy Family often. His Spiritual Adoption Prayer begins “Jesus, Mary, and Joseph, I love you very much. . . .”  Sheen dedicated each of his books to the Blessed Mother and wrote many times about the role of St. Joseph. Letters and signed copies of his books often can be found with the phrases “JMJ” and “God Love You” as part of the message. Fulton Sheen knew his mission was to share the life of Christ with others, and he did so widely and deeply.

In a humorous story shared on of one of his television shows, Sheen related that a father realized he had accidentally picked up the wrong hat in a restaurant when he found the monogram “JMJ” inside.  His son saw it and said, “That’s Bishop Sheen’s hat!”

Fulton Sheen popularized a simple Catholic school practice, reaching millions then and countless more now. Those three little letters not only remind us about the role of the Holy Family in our lives but also the concept of dedicating one’s work to the Lord before it is even begun.

Use Sheen’s “JMJ” routine as inspiration throughout your workday. You may not be able to write “JMJ” at the top of a sheet of paper (or blackboard!) in your line of work but you can find other ways to dedicate your tasks to the Holy Family, uniting your work with prayer. Maybe sign your emails with “JMJ,” bring a picture of the Holy Family for your desk, or say a prayer to Jesus, Mary, and Joseph as you arrive at work.

SHARING SHEEN WITH YOUR FAMILY

Encourage your children to bring back the practice of writing “JMJ” on the top of their schoolwork, teaching them to ask the Holy Family to be with them in all they say and do throughout the school day. Download free printables with “JMJ” in Fulton Sheen’s handwriting below. Print one and hang it above your family calendar or tape it inside your child’s school notebook.

KATIE BOGNER is the junior high faith formation teacher at St. Philomena School in Peoria. She blogs at looktohimandberadiant.com.