Sister Michelle Fernandez, SCTJM, has been named director for Catholic Charities of the Diocese of Peoria.

Sister Ana Pia will continue as director of the diocesan Office of Evangelization and Faith Formation, a role she has filled since last summer. (See related story.) 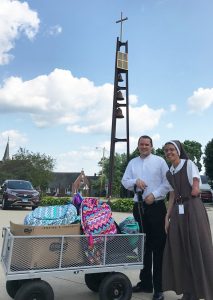 Sister Michelle delivers backpacks loaded with supplies to Father Paul Carlson, pastor of the LaSalle Catholic parishes, for distribution to those in need before school begins. (Provided photo)

The appointments were announced in July by Bishop Daniel R. Jenky, CSC. Both women are members of the Servants of the Pierced Hearts of Jesus and Mary and reside with two other members of their community at Our Lady of Guadalupe Convent in Normal.

“As religious sisters we are sent on missions where we are needed to be the image and presence of Our Lady,” said Sister Michelle. “It is a great joy for me to be entrusted with this new mission to enflesh the spiritual and corporal works of mercy here in Illinois.”

Born and raised in Miami by Cuban parents who immigrated to the United States in the 1960s, Sister Michelle has wasted no time getting to know the 26 counties in Illinois she will now serve. Since her first day in the office on July 8, she has traveled often — assisting with the diocese’s first Rachel’s Vineyard post-abortion healing retreat for those who speak Spanish, delivering backpacks loaded with school supplies to LaSalle, and visiting the Guardian Angel Outreach baby pantry in Streator.

Sister Michelle told The Catholic Post she is grateful for the welcome she has received, and already appreciates the beauty of our rural region. “And there’s no traffic like in Miami,” she said with one her frequent smiles.

“This summer and fall I will be meeting with priests in the various vicariates to identify needs,” said Sister Michelle. While looking to support and expand existing programs, she will soon recruit volunteers in parishes and schools for new Catholic Charities initiatives. One, to be called “Building Bridges of Hope,” includes use of a proposed St. Nicholas Mobile Pantry, a van that will carry requested items to all corners of the diocese. Planning for the mobile pantry was begun under the leadership of Sister Ana Pia.

Prior to entering her religious community, Sister Michelle earned a bachelor’s degree in social work from Florida State University. Her first job was as an emergency needs case manager with Catholic Charities in Tallahassee. She would later return to Miami and work with the homeless population.

“As a social worker, I have worked with individuals in crisis and have had the opportunity to provide support to those suffering from mental illness, homelessness, drug addictions, domestic violence, unplanned pregnancies, and numerous other afflictions that can impact a person from knowing their dignity and worth,” said Sister Michelle.

Feeling “the Lord wanted more of me,” she began discerning a vocation to the religious life and in 2003 she entered the Religious Institute of the Servants of the Pierced Hearts of Jesus and Mary.  She made her first profession in 2006 and professed her perpetual vows on Aug. 15, 2015.

She served in the North Dade Crisis Pregnancy Center before being assigned to St. Mary’s Cathedral School in Miami, where for the next 11 years Sister Michelle would serve as a teacher (fifth grade and religion), vice principal, and principal. Along the way she earned a master’s degree in educational leadership from St. Thomas University in Miami.

“I always told my mom I wanted to be a teacher and a social worker,” said Sister Michelle. “The Lord fulfilled both of those desires.”

During her years at the cathedral school, enrollment increased from 230 students to a capacity of 445 and she was able to raise teacher’s salaries, improve the facilities, and create a drama program.

“Whether rich or poor, immigrant or American, young or old — in all my missions what is clear is that everyone needs healing, love, and the mercy of God’s grace to know their dignity,” said Sister Michelle.

Those who meet Sister Michelle will notice she has no left hand. She was born without one, and says that through the years God has used its absence to “build bridges of hope.”

“My little arm has the form of a happy face at the end of it and this has been God’s stamp that he created me in love and for love,” said Sister Michelle. “I have seen him use me to bring healing to the brokenness in people’s lives through my own challenges in life.” 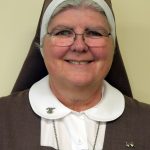 Sister Ana Pia is confident that her successor will continue to build Catholic Charities, an agency that went through a major transition shortly after her arrival in the diocese in 2011. When the state of Illinois passed legislation regarding same-sex unions, Catholic Charities was forced to discontinue its foster care and adoption services because of resulting conflicts. Bishop Jenky made the decision to no longer accept state funding and the number of employees went from 340 to just a few.

“I enjoyed my years at Catholic Charities,” said Sister Ana Pia. “I can’t deny they were ‘interesting’ years with all the changes that happened in the state and nation.”

They live in the same convent, often share rides into Peoria, and their offices are next to one another, so Sister Ana Pia can offer guidance to Sister Michelle upon request. But she doesn’t intend to hover.

“She has great knowledge by being a social worker of how things connect with one another,” said Sister Ana Pia of Sister Michelle. “She may have other ideas of how to make things work, and that will be great.”