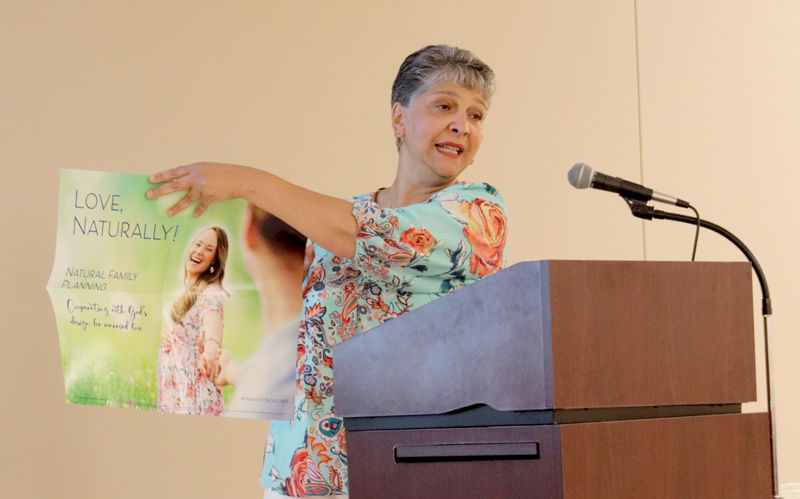 Cecilia Soñé, director of Respect Life Ministry and natural family planning coordinator for the Diocese of Peoria, holds up the poster for this year's observance of NFP Awareness Week, July 21-27, at the annual meeting of parish respect life representatives July 13. (The Catholic Post/Jennifer Willems)

The church teaches that those who have hope live differently and Cecilia Soñé, director of Respect Life Ministry for the Diocese of Peoria, thanked parish respect life representatives for being that sign to the world.

“As people of hope we continue to battle on. . . . Thank you all for your presence always on the battleground, battling against this culture of death and anything that goes against the dignity of life.” — Cecilia Soñé

“You all live differently. You were called to this from the beginning of time,” Soñé told the 25 men and women who gathered at the Family Resources Center in Peoria last Saturday for a preview of the Respect Life Month materials being prepared by the U.S. Conference of Catholic Bishops. This year’s theme is “Christ Our Hope: In Every Season of Life.” They also heard about the inaugural Respect Life Conference, “The Truth Will Set You Free,” that will take place Sept. 13-14 at the Spalding Pastoral Center in Peoria. (See related story here.)

Even though the culture of death seems to be advancing with increased use of chemical abortions, physician-assisted suicide, euthanasia, and embryonic manipulation, “we don’t give up hope,” she said.

“As people of hope we continue to battle on,” Soñé encouraged them. “Once again, I just want to thank you all for your presence always on the battleground, battling against this culture of death and anything that goes against the dignity of life.”

She praised them for standing in all types of weather to pray, to fast and to offer up acts of reparation, and noted that they have participated in 40 Days for Life, March for Life, Life Chain, Life Advocacy Days in Springfield and so much more. 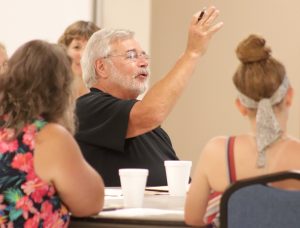 Jack Swan of Sherrard, a member of St. Anthony Parish in Matherville, poses a question at the annual meeting of parish respect life representatives. (The Catholic Post/Jennifer Willems)

“You have also encouraged me as a pro-life health care provider and other pro-life health care providers,” Soñé said. “And even though the fight to protect the unborn has supposedly been lost it does not mean the end to the truth and it does not mean the end to our hope, which is that [Jesus] triumphed on the cross. We must never lose that ultimate fact, that he has won the victory.”

Among the ways the diocesan Respect Life Ministry continues to help people is through Rachel’s Vineyard, a retreat for those who have had or been affected by an abortion. Soñé noted that even as they were meeting, the first Spanish Rachel’s Vineyard retreat in the Diocese of Peoria was taking place.

She also spoke of the wealth of materials offered on a free-loan basis at the Family Resources Center and said, “What would we do without this place?”

Soñé added that soon the patients and their families at the Ronald McDonald House that is being constructed next door will be able to come to the Family Resources Center to escape the “medical scene” for a while.

“I want to thank those that were a part of this. It’s great,” she said of the center, which sits across the street from the Spalding Pastoral Center. “What was started as a small seed of love — look what it’s becoming.”

In the large-group discussion that followed, the respect life representatives talked about the abortion legislation that passed the Illinois General Assembly during the spring session and was signed into law by Gov. J.B. Pritzker. Soñé said next steps are being considered by respect life directors in the Illinois dioceses.

Sondra McEnroe of Central Illinois Right to Life shared information about a 24-hour helpline for those who regret taking mifepristone (mifeprex or RU-486), also known as the abortion pill. She encouraged them to enter (877) 558-0333 in their cellphones so they could help women in crisis. For more information, visit abortionpillreversal.com.