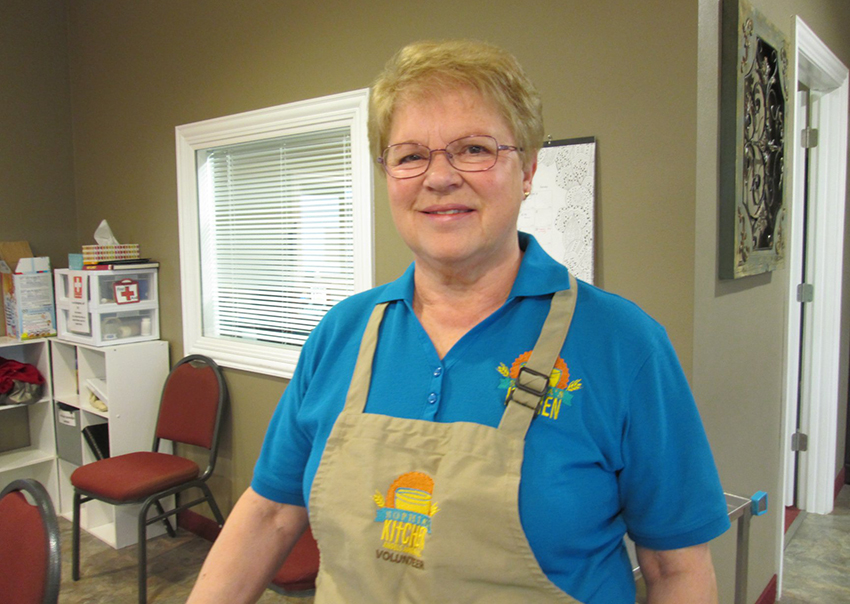 Joyce Rohn of Dunlap is the recipient of the 2019 Golden Sandwich Award presented by Sophia's Kitchen at its Volunteer Appreciation Dinner on June 22.

With dozens of volunteers making certain that Sophia’s Kitchen in Peoria runs smoothly, safely and lovingly for hundreds of clients who come seeking a meal, something cold to drink, and a kind word, recognizing just one can be difficult. Claire Crone said that in the end, they chose Joyce Rohn of Dunlap to receive the 2019 Golden Sandwich Award because “she treats all like they are coming into her own home.”

Rohn has been doing that at the soup kitchen since 2012, giving more than 500 hours since they started keeping track. She can be found at the window of Sophia’s Kitchen, which is located in the parish hall of St. Joseph Church, distributing sack lunches on Tuesday afternoons.

“Joyce approaches her job with enthusiasm and meticulous care,” Crone wrote on Facebook as she announced Rohn’s selection. “After all the love she pours out to the clients, she makes sure that her station is in good order for the next morning crew.”

The first runner-up for the Golden Sandwich Award, which was inaugurated last year and pays homage to the kitchen’s start as the Sacred Heart Sandwich Program, is Louise Hodge of Peoria. She has also given more than 500 hours, one Wednesday morning at a time, Crone told The Catholic Post.

“Sophia’s Kitchen can always count on her to be there when we need her,” Crone wrote in the Facebook post announcing Hodge’s selection. “If someone calls in sick, she’s always happy to step forward and take care of what needs to be done.”

The women were honored at the Volunteer Appreciation Dinner on June 22 at the Spalding Pastoral Center in Peoria.