CHAMPAIGN — Not only has Venerable Archbishop Fulton J. Sheen come home to Peoria, but he now rests in the place that formed him spiritually and sent him out to evangelize the world, said Msgr. Stanley Deptula, executive director of the Archbishop Fulton John Sheen Foundation.

“I don’t think we can underestimate what that church, what the Cathedral of St. Mary of the Immaculate Conception, meant to Fulton Sheen in his life,” said Msgr. Deptula, who is also pastor of St. Matthew in Champaign and St. Boniface in Seymour.

“I don’t think we can underestimate what (St. Mary’s Cathedral) meant to Fulton Sheen in his life.” — Msgr. Deptula

“So much of his formative years in the faith, especially in his life of prayer, happened in that building in our diocese,” Msgr. Deptula told The Catholic Post.

He noted that going into the church that meant so much to Archbishop Sheen should also be formative for our own faith life, to teach us how to pray and help us grow in our love of the Blessed Mother.

While he never knew the venerable Servant of God personally — Archbishop Sheen died Dec. 9, 1979 — Msgr. Deptula said that after directing the Sheen Foundation since 2008 and promoting his cause for sainthood he feels like he has a friendship with Archbishop Sheen. And it continues to grow. 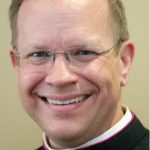 He added that Archbishop Sheen had a gift for bringing people together that continues, even 40 years after his death. Among the people who came into Msgr. Deptula’s life as a result of his work with the Sheen Foundation were some young men in Ireland who had fallen away from the church — until they encountered Archbishop Sheen.

“They discovered Fulton Sheen’s philosophy — not even his spirituality or theology, but Fulton Sheen as philosopher and how he answered so many deep questions of life — and they came back to the church,” he said.

Bishop Daniel R. Jenky, CSC, has worked hard to promote the cause for Archbishop Sheen’s cause for sainthood and bring him to another generation, he told The Post.

“To see these moments now actually happening, it is a wonder in and of itself and a real cause for joy,” Msgr. Deptula said.