WASHINGTON — Somewhere amid the orange peels and Oreos, hot dogs and runny noses of everyday existence, Venerable Archbishop Fulton J. Sheen has made himself at home with Bonnie and Travis Engstrom and their children, and they wouldn’t have it any other way.

After all, they credit Archbishop Sheen with interceding before God on behalf of their son, James Fulton, who entered the world without a heartbeat or drawing a breath for more than an hour. Now an active 8-year-old who likes “Star Wars,” chicken nuggets and playing with his seven brothers and sisters, his birth and healing are the subjects of a new book, “61 Minutes to a Miracle: The True Story of a Family’s Devotion.” 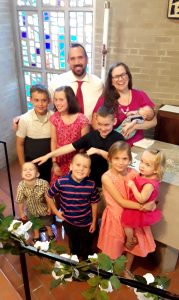 Earlier this month, the Engstrom family celebrated the baptism of their newest member, Stephen. Standing around the font at St Patrick Church in Washington with Travis and Bonnie are: (front row, from left) Thomas, Joseph, Teresa and Miriam, and (second row) Bennet, Lydia and James. (Provided photo)

Written by Bonnie Engstrom, who has blogged and spoken throughout the United States about her family’s experience, the book will be published by Our Sunday Visitor in September to mark the 100th anniversary of Venerable Sheen’s ordination to the priesthood at St. Mary’s Cathedral in Peoria. Pre-orders are being taken now.

“The number one thing I hope people will take away is that Jesus Christ is the one who healed our son, and he used Fulton Sheen,” said Engstrom, a blogger, speaker, and devotion writer for Blessed Is She. “And all of it was for the glory of God and the good of his church. I hope that is clear.”

She added that all of the details she included were intended to help people understand where they were and where they have come as a family so the fullness of what God did is revealed.

In addition to those details about Engstrom’s pregnancy with James, his home birth and medical progress, the book covers the tribunal that was convened by the Diocese of Peoria in 2011 to investigate the healing as miraculous. Sent to Rome for consideration by medical experts and theological advisers to the Vatican’s Congregation for the Causes of Saints, it was approved by both groups in 2014.

Readers will also find a host of quotes from the writings of Archbishop Sheen and the prayer to obtain a favor through his intercession, as well as a timeline of his life and cause for canonization. Another appendix explains the church’s canonization process.

Engstrom actually started writing “61 Minutes to a Miracle” six years ago and has been through “a couple of versions” with her editors at Our Sunday Visitor since then. After getting it where they wanted it, author and editors decided to wait until Archbishop Sheen’s beatification to publish the book.

“We wanted to be respectful of the cause and the process, so that’s why we waited,” she said.

Even though the cause was suspended, they decided to pick up the project again as a way of honoring Venerable Sheen’s ordination centennial on Sept. 20. Engstrom added that it would work out well personally since her son, Sheen’s namesake, would celebrate his birthday and ninth anniversary of the alleged miracle on Sept. 16.

Engstrom calls it “God’s timing” that the book is being published just as Sheen’s cause seems to be making progress again. (See related story.)

Even though she has told the story many times, Engstrom said it was still hard to write about what happened with James because it was so emotional. At times she would have to stop writing and “cry it out.”

Even so, Engstrom never gets tired of telling people what happened.

“When God has done something good, it’s a joy to share that news,” she said.

The Engstroms especially enjoy talking about Fulton Sheen as a family. Bonnie Engstrom pointed to the bookcase in her living room where a stuffed figure of the El Paso native rested with those of some other holy men and women that are held often by little hands.

“His image and his name are all around the house,” she said. “We ask for his prayers.”

For more about Engstrom and the alleged miracle, visit bonnieengstrom.net or go to aknottedlife.com.

To pre-order “61 Minutes to a Miracle: The True Story of a Family’s Devotion,” visit osvcatholicbookstore.com and click on “Coming Soon”, go to amazon.com, or visit a local Catholic bookstore.