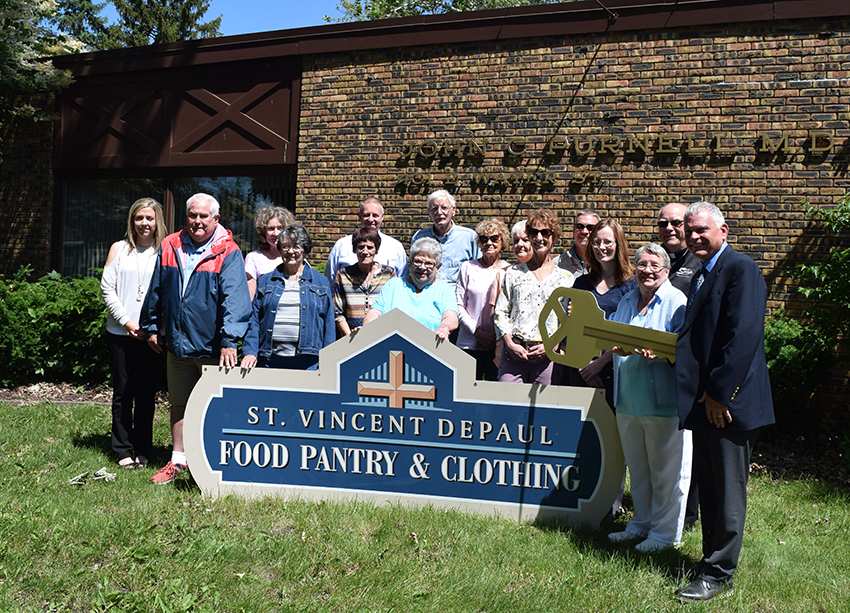 PONTIAC — The Bank of Pontiac has given the St. Vincent de Paul Pantry a former medical office building at 401 E. Water St. to serve as a new, larger storage and distribution site for its food and clothing outreaches.

“The bank has been well supported by the community and its churches,” said Bill Kauffman, president and CEO of the Bank of Pontiac, on June 13 after presenting a symbolic key to Evelyn Ribordy, pantry director. “This is something we could do to give back.”

Both Kauffman and Ribordy credited Bob Meiner, a bank vice president and a member of St. Mary Parish in Pontiac, for proposing the donation of the building to expand the services of the St. Vincent de Paul Pantry. Vacant for three years, the facility formerly housed the family medicine offices of Dr. John Purnell.

Since late 2007, the pantry has been located in a two-room addition built as part of a major expansion project at St. Mary Parish and School. The new location, about five blocks southeast of the parish, will be four times larger, said Ribordy.

“We’ve had people standing in line outside,” she told The Catholic Post. “Now we’ll have a waiting room.” 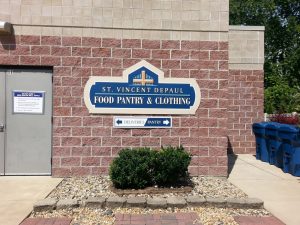 The present St. Vincent de Paul Pantry operates out of two rooms built as part of a major parish and school expansion project in late 2007.

In addition, she said the move — expected to take place around Sept. 1 after a remodeling of the building’s interior as well as exterior clean-up — will allow freezers to be located at the pantry site. The current pantry utilizes freezer space in the school.

The St. Vincent de Paul Pantry serves between 110 to 150 families per week. It is open to clients on Thursdays, from noon until 5:15 p.m., and is staffed and operated by 27 volunteers.

“The people that come to us are truly in need,” said Ribordy. “They really need our help, and they get our help because they know we care for them.”

Among those attending the June 13 ceremony was Father David Sabel, who has served St. Mary Parish since his ordination to the priesthood in 2009. Father Sabel this month was succeeded as pastor of St. Mary by Father Adam Cesarek, but continues to live at the Pontiac parish while serving as pastor of neighboring parishes in Chenoa, Lexington, Flanagan, and Chatsworth.

“The Bank of Pontiac is a very community-oriented institution and has been supportive of St. Mary’s over the years,” said Father Sabel in expressing gratitude for the gift of the building.

EDITOR’S NOTE: Those who would like to contribute to help defray remodeling costs at the new building are invited to send checks to St. Mary Parish, 119 E. Howard St., PO Box 374, Pontiac, IL 61764. Put St. Vincent de Paul Pantry in the memo line. For more information on the pantry and its operations, or to volunteer, call Evelyn Ribordy at (815) 844-7594.