Members of the Catholic Women’s League celebrated their 125th anniversary by doing what they do best — helping others.

At its annual Allocation Luncheon, the league gave $17,000 in grants to 14 organizations that serve people who would benefit from tuition assistance, are homeless and hungry, newborn or elderly, and those living with special circumstances in their everyday lives.

Bishop Daniel R. Jenky, CSC, attended the May 14 luncheon at the Spalding Pastoral Center in Peoria and was the first one to thank the members of the Catholic Women’s League for their witness, their love and “for all the good you have done.”

“There is no doubt our faith, what we believe inside, is supposed to have an enormous impact on how we’re supposed to live outside,” the bishop said. “After having read some of your history, the Catholic Women’s League of Peoria is an example to the entire diocese.”

He praised them not just for reaching into their wallets, but for using their talents to make the community better.

Beth Bussan of Peoria, president, said the Catholic Women’s League was established in 1894 “by a few dedicated women humbly answering Christ’s call by assisting the Peoria area,” and today’s members have no intention of stopping their efforts to foster charity, worship and love.

“We want to go beyond by understanding the needs and how to meet the needs of the community through charity,” she said, adding that prayer, especially the league’s monthly rosaries, are an important part of what they do. Their goal is to make certain Christ’s love is freely given and received in fellowship.

While they no longer hold the banquets and balls that marked their history for the first 100 years, the group continues to raise funds through dues of $10, donations, and events such as “dinnerless dinners.”

“I am so happy to be standing before you in gratitude and awe of all that the membership does during the year,” Bussan said.

This year, that work resulted in grants of $8,000 to Peoria Notre Dame for tuition assistance, and $1,000 each to the Sisters of St. Francis of the Immaculate Conception for their work with the elderly; Phoenix Community Development Services (formerly South Side Office of Concern) for its housing program; St. Augustine Manor, which offers housing and spiritual support for seniors; Sophia’s Kitchen, which feeds an average of 350 people each day during the week; and Women’s Care Center, which helps mothers and their unborn babies and offers parenting education.

Grants of $500 were given to Catholic Charities of the Diocese of Peoria, the Christ Child Society of Central Illinois, Common Place, the Missionaries of Charity, the Central Illinois Center for the Blind and Visually Impaired, Renaissance Stand, St. Joseph’s Home of Lacon, and CASA of the Tenth Judicial Circuit or court appointed special advocates for children going through the court system because their parents aren’t able to provide safe homes for them.

The Catholic Women’s League also recognized one of their own with the Angel Award for special service to the organization. This year’s recipient was Angie Metz of Peoria. 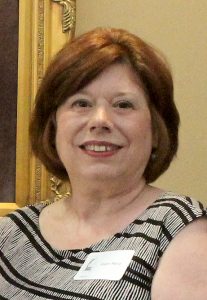 While she was not able to be present, Bussan cited her for her work as vice president and membership director, and then president for four years. She continues to serve as immediate past president.

It was Seghetti who thanked the outgoing members of the board and installed the officers for 2019-20.

The league’s chaplain is Father David Richardson, pastor of St. Philomena in Peoria.

Bussan thanked the board and singled out the research team of Gail Kruse and Vicki Rocke for their work on the 125th anniversary event, including the displays and video that was prepared for the luncheon. Bussan also expressed gratitude to Sister Lea Stefancova, FSJB, and Sister Ann Gill, FSJB, diocesan archivists for their help, and the Peoria Historical Society.