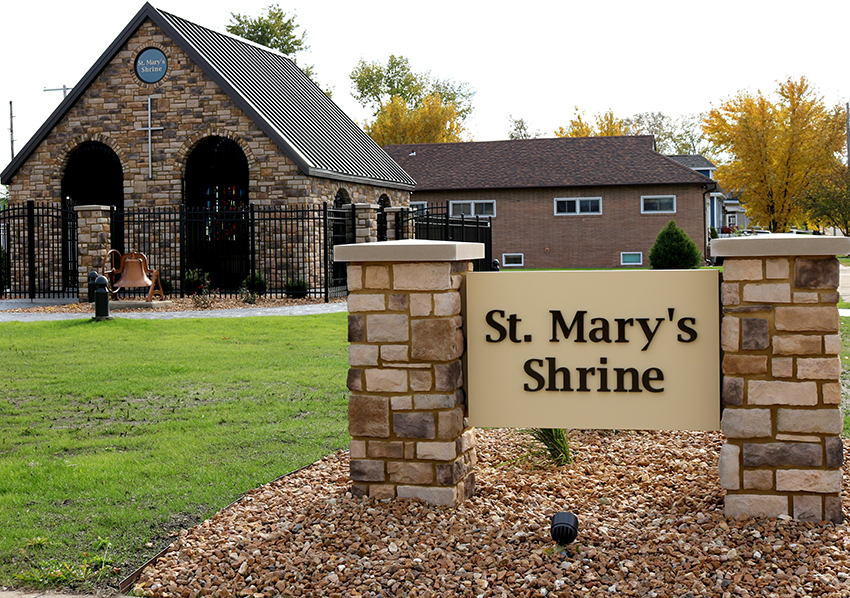 NAPLATE — A shrine in honor of the Blessed Virgin Mary was blessed May 12 on land that until a tornado hit in early 2017 was the site of a Catholic church under her patronage.

Bishop Daniel R. Jenky, CSC, presided at the dedication of St. Mary’s Shrine, an open-air stone structure at 2005 Center St. that is filled with items from the former St. Mary Church. The church sustained structural damage in the deadly EF-3 tornado and was subsequently razed.

About 40 people attended the blessing. Among those speaking in addition to Bishop Jenky were Msgr. Philip Halfacre, vicar of the Ottawa Vicariate; Father David Kipfer, pastor of the Ottawa Catholic Community parishes including St. Columba, St. Francis of Assisi, and St. Patrick; and Bill Mucci, a former trustee of St. Mary Parish and a present trustee at St. Francis of Assisi.

Mucci listed the items from the former church now found at the shrine, including the altar, some pews, a crucifix, stained glass images of Jesus and the Blessed Mother, a statue of Mary that stood outside the church for years, Stations of the Cross, and an old church bell that now rests outside the shrine.

The shrine, surrounded by a wrought-iron fence, will be open from 7 a.m. to 7 p.m. seven days a week for private prayer. A few Masses and special devotions will be offered there each year, especially on Marian feasts.

In addition to honoring the Blessed Mother, the new shrine is also dedicated to first responders and encourages prayers for their safety.