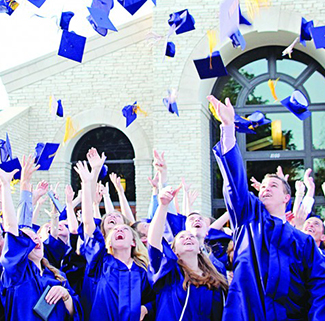 Students from Central Catholic High School in Bloomington toss their caps after a graduation ceremony in this file photo.

Graduation ceremonies have been scheduled for the seven Catholic high schools and academies in the Diocese of Peoria on the following two weekends, with diplomas to be awarded to 588 seniors.

Four schools will hold graduation events on Sunday, May 19.

In Bloomington, the 79 seniors of Central Catholic High School will gather for a graduation Mass at 2 p.m. at Holy Trinity Church. Father Jeffrey Stirniman, parish administrator, will be celebrant, with the homily delivered by Father Joseph Baker, school chaplain.

In Champaign, The High School of Saint Thomas More will host a Mass and graduation ceremonies for its 77 seniors at 2 p.m. Father Eric Bolek, chaplain, will be the celebrant.

In Danville, the 23 seniors of Schlarman Academy will receive diplomas at a 1 p.m. Mass to be celebrated at St. Paul Church.

In Peru, 60 graduating seniors of St. Bede Academy will take part in ceremonies at 2 p.m. in the St. Bede Abbey Church. David Porter, a member of the St. Bede Class of 1961, will be guest speaker. In addition, a baccalaureate Mass is scheduled for 7 p.m. on Saturday, May 18, also at the abbey church.

Graduation ceremonies for three schools have been scheduled for Sunday, May 26.

In Ottawa, Marquette Academy will award diplomas to 46 seniors during 3 p.m. ceremonies at the school’s Bader Gym. This year’s inductees to Marquette’s Hall of Fame will speak. In addition, a baccalaureate Mass is scheduled for 5 p.m. on Sunday, May 19, at St. Patrick Church in Ottawa.

In Peoria, the largest of the graduating classes — the 184 seniors of Peoria Notre Dame — will gather with family and friends at the Peoria Civic Center for a Mass and commencement ceremonies at 2 p.m.

In Rock Island, Alleman High School has scheduled its graduation ceremonies for 1 p.m. in Centennial Hall of Augustana College.  One hundred seniors will receive diplomas and hear a message from Alleman graduate Mike Berry, now a field supervisor for the Federal Bureau of Investigation. Alleman has also planned a baccalaureate Mass for 7 p.m. on Thursday, May 23, at St. Anne Church in East Moline.

Valedictorians and salutatorians from the Class of 2019 will be profiled in a future issue of The Catholic Post.