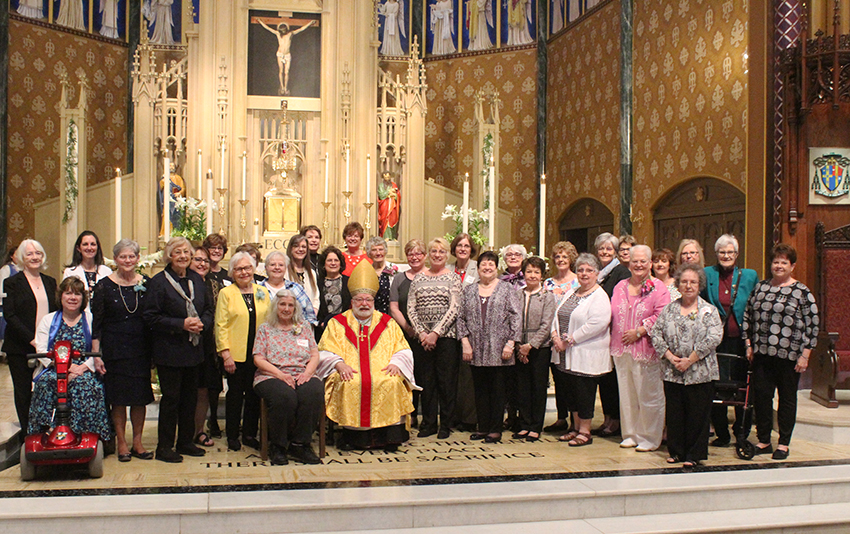 Bishop Daniel R. Jenky, CSC, is surrounded by the women from around the Diocese of Peoria who were honored for their service by the Peoria Diocesan Council of Catholic Women on April 26 in Peoria. "I really don't know what the diocese would do without all of you," he said at the Mass at St. Mary's Cathedral. Sitting far left is Kim Padan, PDCCW president. (The Catholic Post/Jennifer Willems)

Volunteerism is praiseworthy, but volunteerism in the church takes the concept of service to a whole new level and has “a special, special place in my heart,” Kim Padan, president of the Peoria Diocesan Council of Catholic Women, said before honoring 38 women at the annual Appreciation Luncheon. 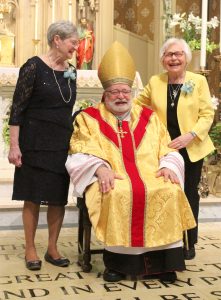 Barbara Michalek and Mildred Longbons share a laugh with Bishop Daniel R. Jenky, CSC, as they wait to have their photo taken after Mass on April 26. The volunteers from Our Lady of Guadalupe in Silvis were honored at the luncheon that followed. The Catholic Post/Jennifer Willems

“I know that all of us working together build the kingdom of heaven on earth and that includes your efforts as musicians, as religious education coordinators and teachers, perhaps working with a parish school, vacuuming and dusting, bake sales, lectoring, being eucharistic ministers, child care — so many things that you do for Christ and his church,” she told those gathered at the Spalding Pastoral Center in Peoria on April 26. “So we thank God for you and what you’re doing right here in the Peoria Diocese.”

“I really don’t know what the diocese would do without all of you,” he said as he greeted the volunteers, who were accompanied by their families, fellow parishioners and pastors. In the name of the 150,000 Catholics he guides in central Illinois, Bishop Jenky thanked the women for their service.

Short biographies of the recipients can be found here.

“YOU HAVE A SERVANT’S HEART”

As the luncheon program began, Padan said that more than once someone told her, “I don’t need that recognition.”

“The fact that many of you say, ‘I don’t need that recognition,’ is proof that you’re worthy of that recognition,” she said. “You have a servant’s heart and you’re doing it for the church and not for yourselves, so we thank you for that.”

Each of the 37 volunteers chosen by their parishes were called forward to receive a certificate and words of gratitude from Msgr. Dale Wellman, a senior priest of the diocese and longtime spiritual adviser to the PDCCW.

On behalf of the council, past president Nympha White of Grand Ridge presented the Imperative Award to Theresa Lindley, a 33-year veteran of The Catholic Post, where she serves as production manager. Her many roles include placing copy, photos and ads on the pages of the biweekly diocesan newspaper, designing ads, maintaining the mailing list, and coordinating production of the Diocesan Directory. 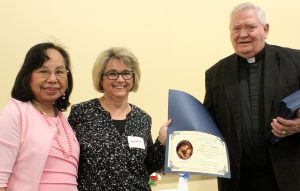 Flanked by Nympha White, past president of the Peoria Diocesan Council of Catholic Women, and Msgr. Dale Wellman, longtime spiritual adviser to the group, Theresa Lindley of The Catholic Post accepts the Imperative Award for her help with ad design and production for PDCCW projects.

Since the Mass and luncheon were held on the feast of Our Lady of Good Counsel, patroness of the NCCW, Msgr. Wellman presented a short history. More information on this devotion and the work of the PDCCW were available in displays placed around the room.

Also available for inspection were a variety of gift baskets, assembled by members of the council’s board of directors. Among them was the popular “Chocolate Basket” — a laundry basket filled with chocolate in all forms, which was won by Msgr. Michael Bliss, pastor of St. Edward Parish in Chillicothe.

“Money trees” worth $25 each were won by Paula Rhodes of St. Paul in Macomb and Mary Norton of St. Patrick in Galesburg. Both women donated their winnings back to the PDCCW for its work.

EDITOR’S NOTE: More photos from the Mass and Appreciation Luncheon have been posted to The Catholic Post’s site on Facebook.