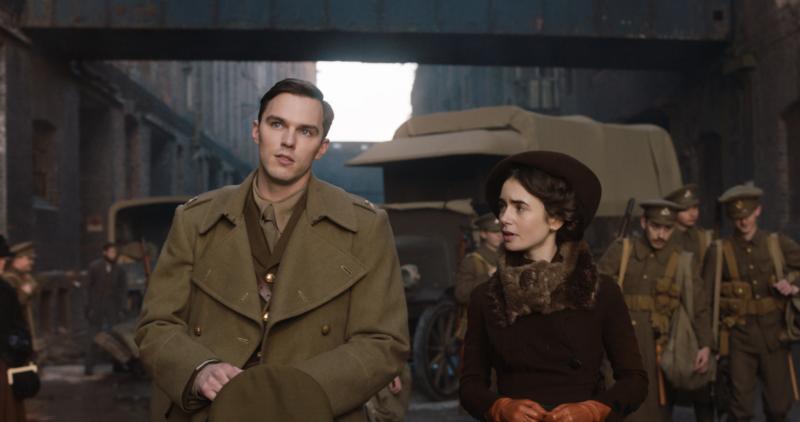 Nicholas Hoult and Lily Collins star in a scene from the movie "Tolkien." The Catholic News Service classification is A-II -- adults and adolescents. (CNS/Fox Searchlight)

Sophisticated profile of the future novelist’s youth traces his passage from impoverished schoolboy (Harry Gilby) to Oxford University scholarship student and beleaguered officer in the trenches of World War I (Nicholas Hoult). Along the way, he bonds with a trio of precociously gifted peers (Anthony Boyle, Patrick Gibson and Tom Glynn-Carney) and falls for his future wife (Lily Collins).

Though the Catholic faith that would help to shape the grown writer’s vision is only represented by the caring but stern priest (Colm Meaney) who served as his guardian after the death of both his parents, director Dome Karukoski and screenwriters David Gleeson and Stephen Beresford successfully convey first the buoyant camaraderie that led the band of friends to regard themselves as brothers and, in the poignant latter part of the film, the horrors of the global conflict in which they were eventually caught up and the toll it exacted on them.

Some harsh combat violence, a few gruesome images, a bit of slightly bawdy humor. The Catholic News Service classification is A-II — adults and adolescents. The Motion Picture Association of America rating is PG-13 — parents strongly cautioned. Some material may be inappropriate for children under 13.