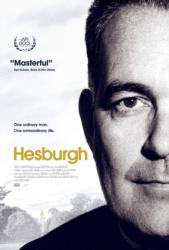 This is a promotional poster for the new documentary "Hesburgh," about Holy Cross Father Theodore Hesburgh, the priest who led the University of Notre Dame for 35 years. (CNS/courtesy OCP Media)

Informative, though wholly uncritical, biographical documentary about Holy Cross Father Theodore Hesburgh (1917-2015) chronicles not only his long tenure as president of the University of Notre Dame but his involvement in cold-war diplomacy, the civil rights movement and shaping the changing character of Catholic higher education.

Filmmaker Patrick Creadon’s profile touches on a number of controversial incidents in the once seemingly ubiquitous cleric’s career and deals with issues that may still divide Catholic viewers. But he also emphasizes his subject’s enduring love of the priesthood.