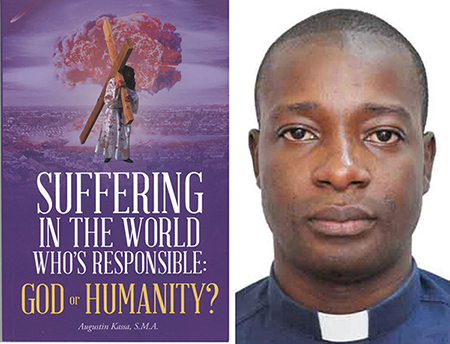 EARLVILLE — Father Augustin Kassa, SMA, dedicates his new book “to the suffering members of the body of Christ.”

That’s a wide target audience, since everyone — from victims of terrorism and poverty to those confronting their own illness or that of a loved one — experiences pain and suffering in their lifetimes.

And the parochial vicar of five parishes in LaSalle County asks some big questions in his 180-page paperback book, starting with the whopper posed in its title: “Suffering in the World: Who’s Responsible, God or Humanity?”

While we won’t give away Father Kassa’s conclusion, we can say it is comforting and the path to it well examined in a very readable format.

IT STARTED WITH A SERMON

Father Kassa was born in the small, French-speaking nation of Togo on the West African coast. He joined the Society of African Missions in 2004, was ordained to the priesthood in 2012, and has served in the Diocese of Peoria since 2014.

But he traces the origin of his book to a Good Friday sermon he gave during his diaconate year while assisting in a parish near Nairobi, Kenya.

That morning, he had visited a woman who lived in terrible conditions and whose health was fragile. He decided to change his prepared sermon to one he titled “Why Suffering?”

“My intention was to try and bring some consolation to the many parishioners whom I knew lived in conditions similar to the woman we just met,” he writes in the book’s introduction.

The sermon drew a diverse reaction and led to further questions, including “If God permits suffering, why pray?” and “How long do we need to suffer for God to stop disciplining us?”

“Seven years after preaching that initial sermon on suffering,” Father Kassa writes, “the reality of people who suffer around me (my mother included) had grown exponentially, and I hadn’t been able to find a meaningful explanation to the mystery of suffering.”

So from February 2018 to February 2019, Father Kassa — who recently earned a master’s degree in systematic theology from the Catholic Theological Union in Chicago — researched and wrote on the topic. His book examines how suffering, and God’s role (if any) in it, is viewed in the Bible and how church teaching has evolved through the centuries. It ends by offering two diverse takes from 20th-century figures — a Dominican theologian, Father Edward Schillebeeckx, who insisted that God is not responsible for the suffering of humanity, and Marthe Robin, a mystic who bore the wounds of Christ (known as the stigmata), which she claimed were received from Jesus.

Father Kassa will sign copies of his book this Sunday, May 5, at a chicken dinner to be served at St. Joseph Parish in Marseilles from 11:30 a.m. to 2:30 p.m. The books will be available for purchase. The Marseilles faith community is one of the five he currently serves. He resides at St. Theresa in Earlville and also assists at St. Mary, Grand Ridge; St. Patrick, Seneca; and St. Patrick, Ransom.

Published by Christian Faith Publishing, his new book can be ordered online through outlets such as Amazon or Barnes and Noble and is also available at Lagron Miller in Peoria. Cost is $14.95, and a Kindle version can be downloaded for $9.99.

“Suffering in the World: Who’s Responsible, God or Humanity?” bears the imprimatur of Father Fabien Sognon, a superior with the Society of African Missions. In the book’s acknowledgments, Father Kassa  — who served parishes in Ottawa from 2014 to 2017 — thanks “the Catholic communities of the Ottawa Vicariate” and the clergy of the Diocese of Peoria.

It is Father Kassa’s second published work. He also compiled a prayer book in advance of the 100th anniversary of the death of his religious community’s founder. He has two manuscripts in the works, one on youth ministry and another on women in the Bible and their prayer lives.