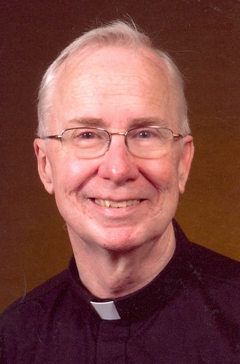 HENDERSON, Nevada — A Mass of Christian Burial will be celebrated on Saturday, May 4, at St. Thomas More Church here for Father Robert T. Bolser, CSV, a native of Rantoul who taught at Alleman High School in Rock Island from 1976 to 1983.

Father Bolser died on April 28 at Nathan Adelson Hospice in Las Vegas. He was 74.

Born April 1, 1945, in Urbana to George and Catherine (Quinlan) Bolser, he graduated from Rantoul Township High School in 1963.

He professed first vows as a Viatorian in 1964 and final vows on Sept. 1, 1967. He received a bachelor’s degree in theology from Loyola University in Chicago, and master’s degrees in religious education and educational psychology from Mundelein College and Western Illinois University. He earned a Master of Divinity degree from Catholic Theological Union in Chicago, and was ordained to the priesthood in Chicago on May 13, 1995.

While a religious brother, Father Bolser had a variety of teaching assignments, including at Griffin High School in Springfield and six years at schools in the South American nation of Colombia.

After his seven years at Alleman High School, he served for six years as director of affiliates and in campus ministry at Saint Viator High School and as a pastoral associate at St. Bartholomew Parish in Waukegan.

Following ordination, Father Bolser was parochial vicar at St. Viator Parish in Chicago for 10 years and at St. Thomas More Catholic Community in Henderson, Nevada, for nine years. He retired in 2015 and moved to the Province Center retirement residence in Arlington Heights a year later.

He is survived by three brothers, Father Charles Bolser, CSV, John Bolser and Joseph Bolser; and two sisters, Mary Catherine Bolser and Colleen Von De Bur. He was preceded in death by his parents, a brother, Stephen Bolser, and a sister, Judith Ann Reale.