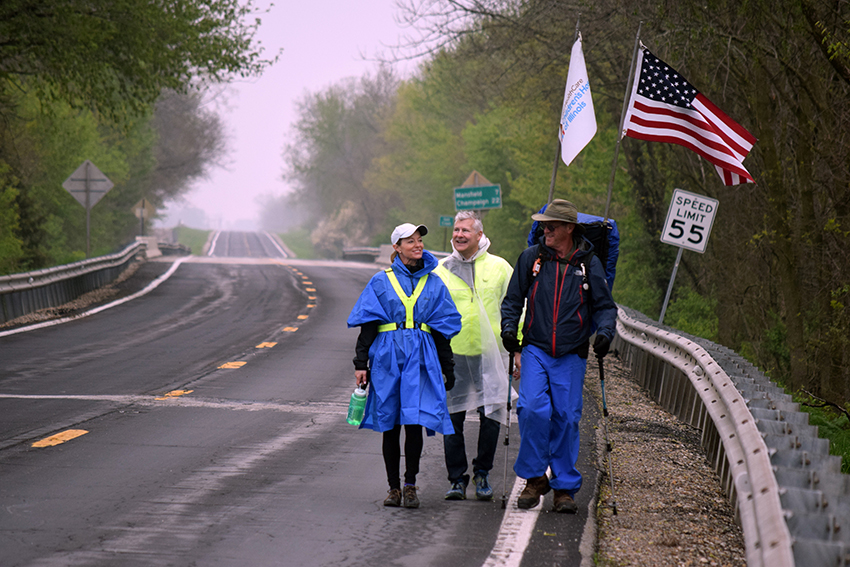 Tom Brewer of Tremont, right, walks along U.S. Highway 150 as he, accompanied by Julie and Matt Hohulin, approach Farmer City on April 30. Brewer is walking a 132-mile route from Danville to Peoria to raise money for OSF HealthCare Children's Hospital of Illinois. (The Catholic Post/Tom Dermody)

As Tom Brewer checked various life adventures and experiences off his bucket list, the retired engineer from St. Mary Parish in Delavan reached for a new bucket to fill with gratitude and ways to pay his blessings forward.

And so this week Brewer, 73 — who has hiked the Appalachian Trail, climbed Mount Everest to the 17,600-foot base camp, and in early April did a true polar plunge in Antarctica — could be seen walking 132 miles of highway from Danville to Peoria, often in the rain, to raise funds OSF HealthCare Children’s Hospital of Illinois. 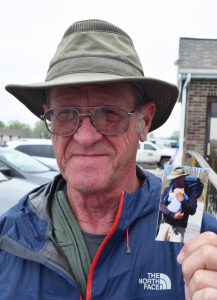 Tom Brewer carries a photo of him embracing a baby named Chloe who, with her mother, greeted him on his inaugural walk a year ago. The mother, thanking Brewer for his fundraising effort, said her baby had just been released from Children’s Hospital of Illinois. “There’s my payment,” said Brewer. (The Catholic Post/Tom Dermody)

“Part of it is awareness and thanksgiving,” said Brewer, in explaining why — for a second year — he has organized a fundraiser known by the abbreviated name of “Tom’s Walk4CHOI.” Last April’s inaugural walk from Rockford to Peoria brought nearly $11,500 in donations for Children’s Hospital of Illinois, the third largest pediatric hospital in Illinois.

This year’s goal is $15,000, with proceeds to benefit the Peoria-based hospital’s Heller Center for Kids with Cancer. The center is funded completely through donations; no family is ever charged for services.

“I’m healthy,” explained Brewer during a brief lunch stop in Farmer City on Tuesday. “My four kids are healthy. My grandkids are all healthy, and so is my one great-grandchild. So part of this is paying it forward. Maybe one of my descendants will need heavy care someday.”

But there are additional reasons that the Tremont resident straps on a harness holding two flags — one a U.S. flag and the other representing the Children’s Hospital of Illinois – and walks about 20 miles a day for nine days each spring.

“I think what I’m trying to do is basically make a pro-life statement without saying that’s what I’m doing,” said Brewer, recalling a phrase attributed to St. Francis of Assisi: “Preach the Gospel at all times. When necessary, use words.”

And so, when contemplating a fundraising walk, he decided to partner with OSF Children’s Hospital of Illinois, which has more than 7,000 admissions each year and cares for more children in Illinois than any hospital outside of Chicago. It is located on the campus of OSF HealthCare Saint Francis Medical Center in Peoria.

JOIN HIM SUNDAY FOR FINAL MILE

Each day of his journey, rain or shine, Brewer sets out at 8 a.m. and — accompanied by a small group of family members that changes daily – walks tens of thousands of steps until about 5 or 6 that evening. This year’s walk began with a send-off at OSF HealthCare Sacred Heart Medical Center in Danville early on Saturday morning, April 27. His 2019 route, almost entirely along U.S. Highway 150, includes overnight stops in Ogden, Urbana, Mansfield, LeRoy, Bloomington, Congerville and Morton. 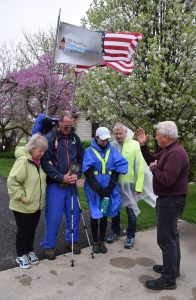 Deacon Scott Whitehouse of Sacred Heart Parish in Farmer City offers a blessing to Tom Brewer and accompanying family members as they passed through that community on April 30, the fourth day of Brewer’s walk from Danville to Peoria. With Tom are, from left, his wife Stella, and their daughter and son-in-law, Julie and Matt Hohulin. (The Catholic Post/Tom Dermody)

Supporters are invited to join Brewer on two final phases of his walk this weekend. On Saturday, he will walk on a bike trail from Detroit Avenue in Morton to East Peoria.

At 2 p.m. this Sunday, May 5, he will complete the journey by walking a symbolic final mile on the OSF Children’s Hospital of Illinois campus, 530 N.E. Glen Oak Ave. in Peoria.

“It’s not just me,” Brewer emphasizes about the project. “The whole family does this.”

His daughters Julie and Jo Ellen assist with spreading the news on social media, including daily updates on the Facebook page “Tom’s WALK4CHOI.” They, like his sons Tom and Steve, also walk part of the route with their Dad, and family donations are pooled to provide matching funds for other contributors.

Tom’s wife, Stella, shuttles those accompanying her husband between daily start and stop points, provides prayer support, and admits to worrying a bit for his safety.

“I have the easier job,” said Stella, who added she fully supports Tom’s efforts.

Remember the bucket of gratitude mentioned in the opening paragraph? The fundraising walk is far from the only item Tom Brewer has placed within it.

At St. Mary Parish in Delavan, he is a parish trustee, serves on the finance committee, and is active in the men’s club. He is a volunteer emergency medical technician for Tremont Rescue, of which he is treasurer. And in recent years he has made an annual trip to Haiti as part of water well drilling teams organized by the Apostolic Christian Church in Tremont. 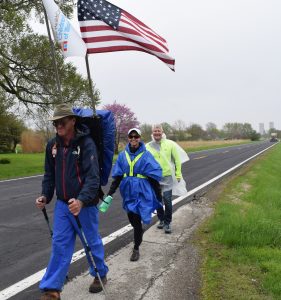 Tom Brewer walks along U.S. Highway 150 as he, accompanied by Julie and Matt Hohulin, leave Farmer City on April 30. That day’s leg of the journey began in Manlius and ended in LeRoy. (The Catholic Post/Tom Dermody)

“I need a challenge all the time,” he told The Catholic Post.

This year’s walk has proven to be different than last year’s in a few respects. The weather was sunny and warm for most of the 2018 Rockford to Peoria trek, and there was little publicity.

“Last year I started in Rockford with just me and Stella,” Brewer recalled. This year he was interviewed by newspapers and television stations along the way and blessed by priest chaplains at OSF-affiliated hospitals on the route. He also received a blessing from Deacon Scott Whitehouse as he passed through Farmer City.

He says those he meets on the walk are always friendly. He has been offered food and water, which he graciously accepts, and one other kind gesture, which he just as graciously refuses.

“I had a guy yesterday who waited for me at an intersection and said, ‘I can give you a ride,’” recalled Brewer. “I said ‘No, but thank you anyway.’”

Always thinking ahead, Brewer admits he has a four-year plan with his walk for Children’s Hospital. Having taken a northern route and an eastern route, he would also like to begin walks to Peoria from the west and the south.

“I’m hoping to make a cross across Illinois,” confided Brewer.