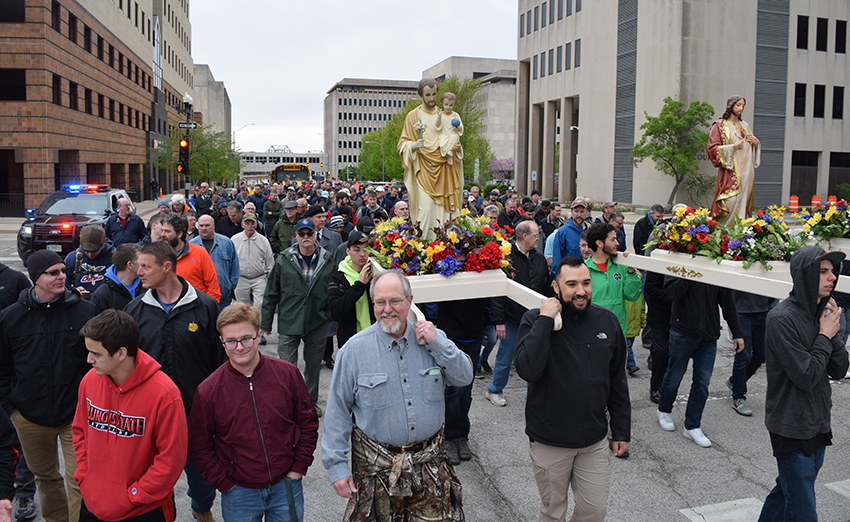 A scene from the 2019 "A Call to Catholic Men of Faith." All men of the diocese are invited to take part in the 2022 Men's March and Mass in Peoria on Saturday morning, April 30. (The Catholic Post file photo/Tom Dermody)

Hundreds of Catholic men from throughout the Diocese of Peoria were challenged to be “companions of Jesus Christ” and servant-leaders in their families, parishes and workplaces at the 16th annual “A Call to Catholic Men of Faith” on April 27.

“Whether somebody invited you here, or if you came on your own, God wants you here,” assured Father Lee Brokaw, celebrant and homilist at the Mass at St. Mary’s Cathedral that followed a prayerful march by the men through downtown Peoria. 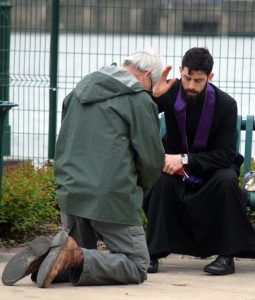 Father Michael Pica pronounces the words of absolution to a penitent prior to the men’s march on April 27. (The Catholic Post/Tom Dermody)

“Jesus calls each of you here this morning to feed you with Himself at a providential time in church history,” said Father Brokaw, who is parochial vicar of St. Matthew Parish in Champaign. “He wants you and chooses you to go to your brothers in the workplace, to go to your sons, and to speak truth into their lives in a bold way – to invite people into a community of love in the church, which so many men want, but they don’t know where to find.”

The annual event began in 2004 and was inspired by a homily Bishop Daniel R. Jenky, CSC, gave the preceding fall in which he urged Catholics to “rise up,” defend their faith, and “intentionally and deliberately stand with our God.”

OBJECTIVE — TO WIN HEARTS FOR CHRIST

This year’s gathering opened with about a half-dozen priests offering the sacrament of reconciliation on the banks of the Illinois River as the men assembled on a plaza near the Gateway Building for a pre-march rally.

In welcoming remarks, Deacon Michael Schallmoser of St. Philomena Parish in Peoria quoted Bishop Jenky’s homily from 2003 and thanked him for his “bold leadership.”

“We are proud to stand with you to proclaim Christ not only today, but always,” he told the bishop, who was present on the riverfront, drawing robust applause.

The theme of the 2019 event was “Fighting for Faith and Family,” and before the men prayerfully marched through downtown Peoria to the cathedral, they received encouragement in that fight from Father Matthew Deptula, the rally’s guest speaker.

“When we march for faith and family, it is the conversion of the human heart that is our goal,” said Father Deptula, who is parochial vicar of St. Paul Parish in Macomb, St. Rose of Lima Parish in Rushville, and assistant chaplain at St. Francis of Assisi Newman Center at Western Illinois University.

“That is our objective because it was the objective of Jesus Christ himself, to win hearts,” continued Father Deptula. “And if we win enough of them, we win the world for Christ.” 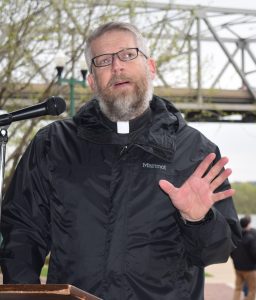 “When we march for faith and family today, the conversion of human hearts is our goal,” said Father Matthew Deptula, featured speaker prior to the men’s march. (The Catholic Post/Tom Dermody)

But Father Deptula warned the men “we have our work cut out for us” because the “lies of the enemy” are portraying evil as in need of defending in today’s culture.

“The result is that it can be said that in a society founded upon Christian ideals of faith and family, it is no longer Christian to be a Christian,” said Father Deptula.

Urging the men to be courageous and “put our trust in Christ,” Father Deptula said “we march today for a better way — not an alternative way as if Jesus was one way among many. We must insist on building a culture of truth and a culture of life.”

CALLED TO LAY DOWN LIVES

While rain was forecast for the morning, it held off as the men walked the mile-long route through downtown Peoria to the cathedral. Leading the procession were two identifying banners and three statues — of Mary, Jesus, and the march’s patron, St. Joseph, holding the Child Jesus — carried by march participants.

As Mass began, Bishop Jenky thanked the men for their presence.

“You build up the faith of one another, and you build up your bishop’s faith by your witness and commitment,” he told them.

In his homily, Father Brokaw said the “fullness of masculinity” is found in Jesus, who “showed us what it means to love, to sacrifice, and lay our lives down to lead our brothers and our families to heaven.”

“And there’s nothing that fires us up, inspires us more, than this call to battle, to lay our lives down completely” as Jesus modeled on the cross, said Father Brokaw. “It’s my prayer for all of us, especially for us priests, that every day we have a deepening hunger to be a companion of Jesus Christ.” 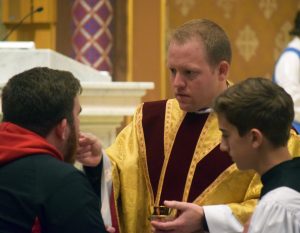 Father Lee Brokaw distrubutes Communion at the men’s march Mass. In his homily, Father Brokaw said God wants the men to be leaders in the church and that Jesus called the men to the event “to feed you with Himself at a providential time in our church’s history.” (The Catholic Post/Tom Dermody)

Ten members of the “Men of Faith Choir” from Blessed Sacrament Parish in Morton provided special music before and during the Mass.

At the conclusion of the Mass, Bishop Jenky blessed commemorative medallions that featured the day’s theme along an image of St. Michael the Archangel. The medallions were distributed to participants as they left the cathedral to attend a fellowship lunch at the nearby Spalding Pastoral Center.

Paul Prabhu, a member of St. Patrick Church of Merna in Bloomington, told The Catholic Post he attended the men’s march with his son Jonathan because it is “essential we demonstrate our faith” and that the day provides “a reminder of what we are to do as men of faith.”

“It’s amazing to see so many men of the diocese come together for an event like this,” said Marty Urbanc, a member of St. Mary of the Woods Parish in Princeville who for six years has been part of three generations of his family taking part in “A Call to Catholic Men of Faith.” He walked with his son, Steven, 10, and his father, David, a member of Holy Family Parish in Peoria. The three carried the gifts in the offertory procession at the Mass.

EDITOR’S NOTE: More photos from “A Call to Catholic Men of Faith” have been posted to The Catholic Post’s site on Facebook.