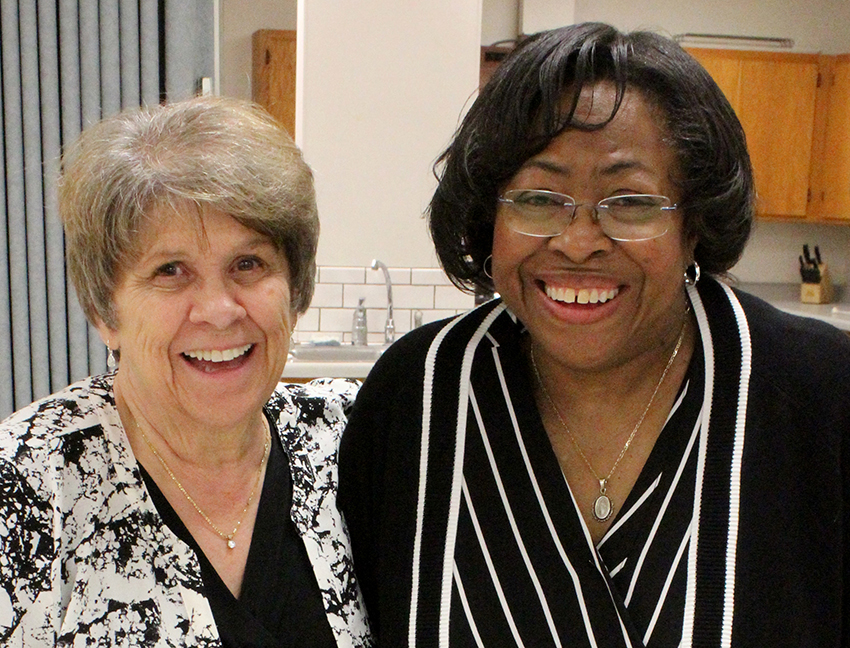 Kate Larson, left, and Cindy Edmonson are stepping down from their RCIA ministry for the Galesburg Catholic community after 22 and 35 years, respectively. (The Catholic Post/Jennifer Willems)

Kate Larson stole a glance at Cynthia Edmonson as she said this, standing side by side in a pew at St. Patrick Church as the Easter Vigil began, and it only made their smiles that much bigger.

One wouldn’t have blamed them for crying, since this was their last Easter Vigil as co-coordinators of the Rite of Christian Initiation of Adults for the Galesburg Catholic community. Larson has been part of the team for 22 years, while Edmonson has been involved in preparing people for the Easter sacraments of baptism, confirmation and Eucharist for 35 years. 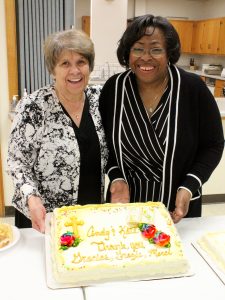 Kate Larson and Cindy Edmonson were honored with a cake at the reception that followed the Easter Vigil at St. Patrick Church in Galesburg. . (The Catholic Post/Jennifer Willems)

Prior to Holy Saturday they weren’t sure how they’d react. “Bittersweet” is the word they used.

“You think of all the things we’ve been through. It’s part of your heart,” Edmonson said.

“We’ve built relationships with people — I’ve been godparent with some of our people’s children,” Larson said. “We’re going to miss them a lot.”

It’s something they’ve been thinking about for two years.

Noting that it’s time for “new blood” and “new ideas,” Edmonson said she also looks forward to focusing on her spiritual life a little more.

“When you’re with the RCIA you’re always thinking about the people and what we can do to help them and sometimes you forget about yourself,” she told The Catholic Post.

There are also grandchildren to be considered — a boy, 3, and a girl, 2. Edmonson cares for them on Monday, Tuesday and Friday and stays for supper with their parents.

Larson is also looking forward to spending more time with her children, grandchildren and siblings in Wisconsin.

While there have been many holidays and weekends that didn’t belong to them over the years, both spoke with great love about what they’ve been able to do.

Edmonson knows firsthand what the RCIA candidates and catechumens are going through. She was received into the Catholic Church in 1976.

At that time, she was married and raising her son and daughter with her husband, Dean. There was no RCIA at that time, so she started instruction twice a week with Father Joseph Hunt. They met for a year, and while he wanted her to know the Baltimore Catechism well, he also emphasized the need to understand what she was learning.

What kept Edmondson involved for 35 years? “The joy of seeing people join the church — the happiness it brings you to meet these people and help them with their faith journey,” she said.

“I read every saint book there was,” Edmonson added. “All kinds of things.”

She started working with the RCIA gradually. Serving first in hospitality and meeting people before each session started, she was invited by her pastor, Father Joseph McAteer of Corpus Christi in Galesburg, to be a catechist. Eventually he asked her to consider directing the process.

What has kept her involved for so long?

“The joy of seeing people join the church — the happiness it brings you to meet these people and help them with their faith journey,” she said.

Larson is a Yuper — someone from Michigan’s Upper Peninsula. “I worked my way down,” she said with a laugh.

A cradle Catholic, she moved from Wisconsin to Galesburg with her family during her senior year at Costa High School. A year was all it took to meet her husband, Jerry, and fall in love.

They were married the following year and raised their two sons and a daughter in Galesburg. Their oldest son was profoundly handicapped, never walking or talking, but they took him everywhere. In time, she would get involved in Special Persons Encounter Christ and brought it to Galesburg in 1984.

The Larsons were active at Costa, serving on the school board and with the parents group.

In 1996 her son died from cancer, her daughter got married, and her youngest son graduated from college. A year later, after serving as an RCIA sponsor for her niece, Kate was asked to be a catechist and Jerry encouraged her to accept.

While she insists that she pushed her way into the leadership role with the RCIA, Edmonson just smiles.

These sisters said they would help out if needed.

“We’re going to have to make something up — RCIA directors emeritus,” she said with another laugh. “Can we come to your workshops?”