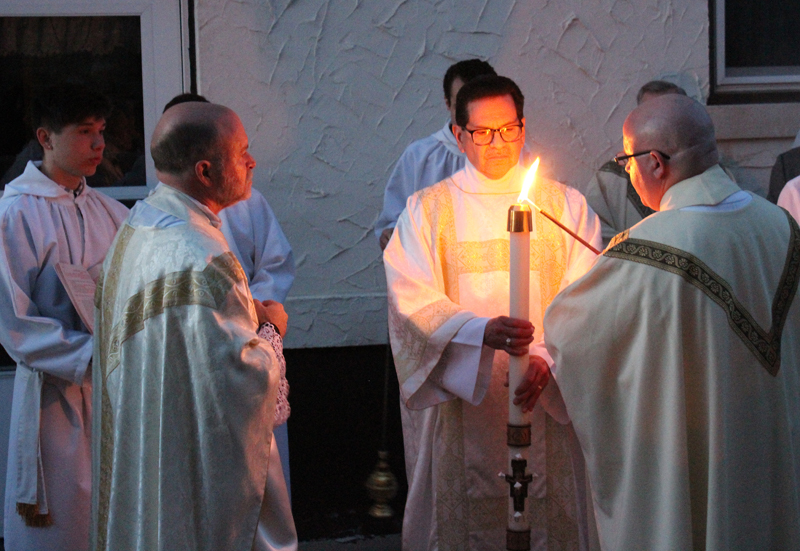 Father Jacob Rose lights the paschal candle, held by Deacon Robert Rodriguez, with a flame taken from the new fire built outside St. Patrick Church in Galesburg. Looking on is Father William Miller, pastor, who blessed the candle as part of the Service of Light at the Easter Vigil April 20. (The Catholic Post/Jennifer Willems)

GALESBURG — In the waters of baptism, Max and Owen De Smit received a new life in Christ last spring, and at the Easter Vigil on April 20, their mother Hannah joined them.

She was one of two people baptized at the Holy Saturday liturgy at St. Patrick Church here, and one of nine received into the Catholic Church with the support of the Galesburg Catholic community. They were part of the Rite of Christian Initiation of Adults, which prepared them for the Easter sacraments of confirmation and the Eucharist, as well as baptism. 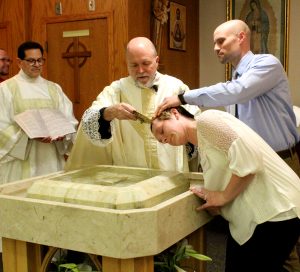 Father William Miller pours water over Hannah De Smit’s head as he baptizes her at the Easter Vigil at St. Patrick Church, Galesburg. Assisting her is her husband and godparent, Tim. (The Catholic Post/Jennifer Willems)

“When we started, my husband said, ‘If there’s even a 1 percent chance that you believe in any of this, then this is where we need to be.’ I just kept running that through my head,” De Smit told The Catholic Post during a reception in the parish hall after Mass. “I just feel like I found it.”

The Avon family will continue the celebration this Sunday when Max, 9, receives his First Communion.

The celebration is meant to continue, according to Father William Miller, pastor, because “every Sunday is a little Easter.”

“Our newest Catholics here are not graduating, but being initiated into this (paschal) mystery,” he said during his homily. “And they remind each one of us that we are also beginners — beginning again and again by the power of the one who says in the Book of Revelation, ‘See, I make all things new.’”

This year, parishes around the Diocese of Peoria welcomed 278 people like Hannah De Smit into the Catholic Church and rejoiced as they joined their fellow parishioners at the eucharistic table for the first time.

Catholic News Service said that 89 reporting dioceses — roughly half the total number in the United States — had received more than 37,000 men, women and children at Easter celebrations. 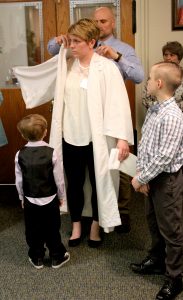 Tim De Smit helps his wife, Hannah, don her white garment after her baptism at the Easter Vigil at St. Patrick Church, Galesburg, on April 20. Offering support are her sons Owen, 4, and Max, 9. (The Catholic Post/Jennifer Willems)

“My husband, who had been brought up Catholic, had been away from the Church for a while. I think our children brought us back,” she said. “He had this calling in his heart that they needed to be baptized and we thought this was the place for us.”

They were living in Abingdon at the time, so she started coming to the RCIA sessions in Galesburg on Thursday nights and her husband, Tim, served as her sponsor.

“It was a night for us to connect on a deeper level of our journey with Christ. And there were other people who were in that same place in their life,” De Smit said. “That was comforting, to know that you aren’t alone, that there are people praying for you, thinking of you.”

A mother to two young sons who works part time as an x-ray technician at OSF HealthCare St. Mary Medical Center in Galesburg, she admitted to feeling torn between the two sometimes. The woman she eventually chose as her patron saint for confirmation, St. Thérèse of Lisieux, helped with that, too.

“I liked her saying, ‘Doing small things with great love makes them holy,’ and I find that really relates to my life,” De Smit said.

“CHRIST IS OUR LIGHT”

It was Natalia of Cordoba that inspired Amy Estrada, who made a profession of faith and received Communion for the first time at the Easter Vigil. The saint, living in Muslim Spain in the 800s, was martyred when she declared she was a Christian. 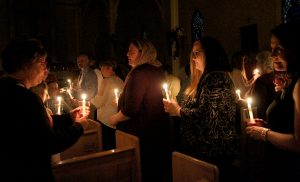 The light of Christ, take from the paschal candle, is shared by those who will be received into the Catholic Church at the Easter Vigil at St. Patirck Church, Galesburg, April 20. (The Catholic Post/Jennifer Willems)

“I found her very inspirational for her bravery and for standing up for grace at that difficult time in history. It spoke to me a lot,” Estrada said, noting that all of the saints provided an example in the way they followed Jesus.

Raised as a Lutheran and confirmed in that faith tradition, she admitted to being drawn to the Catholic Church. “I always felt there was something missing,” she said.

Estrada and her husband, Rafael, sent their two daughters and two sons to Costa Catholic Academy when living in the area and she said that was “the glue that kept our family together.” In fact, her daughter, Sara, 23, was her sponsor on Saturday night.

“It really touched me that we raised her in this church and then she’s able to help bring me along,” Estrada said.

That’s what “light bearers” are called to do, Father Miller said in his homily.

“As we rightly immerse ourselves in the joy of Easter, let us be recommitted to being light bearers rather than cursers of the darkness,” he said. “We were made for the light and Christ is our light, thanks be to God.”