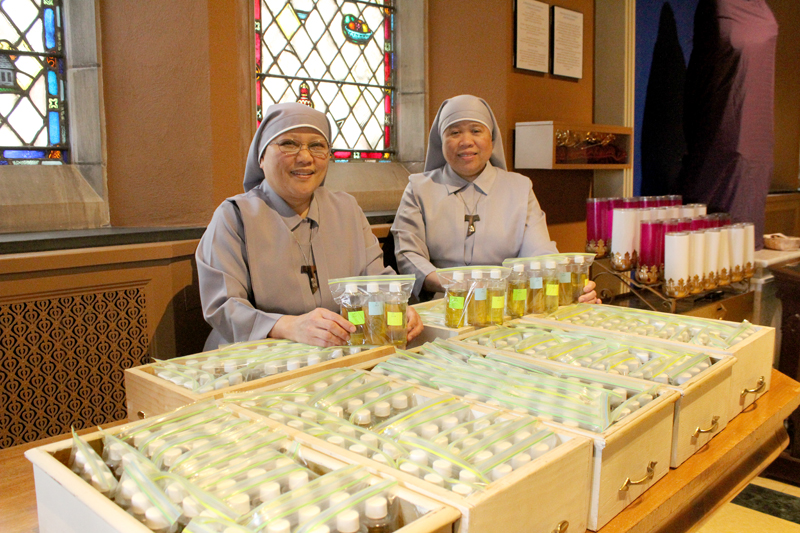 Sister Salve Tusing, FAS, (left) and Sister Merlinda Marco, FAS, hold just a few of the 230 sets of holy oils that were distributed to the priests after the Chrism Mass. These oils will be used in sacramental anointing at parishes around the Diocese of Peoria this year. (The Catholic Post/Jennifer Willems)

Each year as the Chrism Mass ends, the priests of the Diocese of Peoria receive sets of the newly blessed oils to use in sacramental anointing in their parishes over the next year. What many people don’t know is that those oils are bottled, labeled and placed in individual bags by a small group of volunteers during Lent. 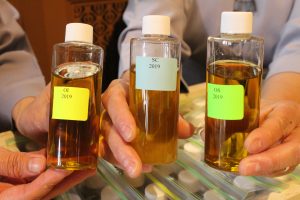 In all, 230 sets of the holy oils are prepared by Sister Salvacion (Salve) Tusing, FAS, who works in the residence of Bishop Daniel R. Jenky, CSC, and Sister Merlinda Marco, FAS, who serves at Sophia’s Kitchen, the lunch program based at St. Joseph Church in Peoria. This requires 28 bottles (101 ounces each) of extra virgin olive oil and four 16-ounce bottles of balsam for the Sacred Chrism.

The labels are made by Laurie Ullrich, secretary to the bishop and the chancery office. Her husband, Bill, assists the Sisters in preparing the oil and filling the bottles.

“We love to do it,” Sister Salve told The Catholic Post. “We can do it in one day. If we really want to do it, we can finish the whole thing. But it’s too much for one day.”

They usually start after Ash Wednesday, which was March 6 this year. Working a little at a time in the evenings, they had everything ready to go by March 25, Sister Merlinda said.

“Even when we are tired from our other work, we still do it for the love of God,” she said simply.

“Sometimes we tell the Lord, ‘This is for you,’” Sister Salve added.

When the time comes for the Chrism Mass, usually held on the Tuesday of Holy Week in the Diocese of Peoria, Sister Salve and Sister Merlinda join the other consecrated religious in prayer. The oils are distributed to the priests by Laurie Ullrich and her mother, Rose Hansen, and Cheryl Berkshier, chancery assistant.