When a majestic, 850-year-old cathedral in the heart of Paris burned on April 15, the people of France and around the globe rightfully reacted with shock, sadness, prayer and resolve. Notre Dame Cathedral is a world historic and spiritual treasure. Across social media, those blessed to have experienced its splendor are posting images and sharing memories from their visits, whether they took place last week or 50 years ago.

The gazes of millions – those near the site or watching on screens – were fixed on the burning edifice. How many historic examples of sacred art and architecture would be forever lost? What might be mercifully salvaged? So much history gone in a matter of hours. Such a tragedy. 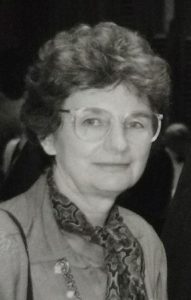 Albina Aspell, former editor and publisher of The Catholic Post of Peoria and a past president of the Catholic Press Association of the United States and Canada, died April 11 at the age of 92. (Photo from the Aspell family)

I learned the breaking news of the fire while at a luncheon following the funeral Mass for Albina Aspell, a journalist, history enthusiast, and herself a historic figure in the national Catholic press. Albina, who died April 11 two days after her 92nd birthday, has a revered place in the annals of the Diocese of Peoria and its newspaper, The Catholic Post.

While the prairie diocese in central Illinois has produced such notable figures as Venerable Archbishop Fulton J. Sheen and historian Msgr. John Tracy Ellis, Albina’s resume places her, too, in rarified air. She was the first lay and the first woman editor and later publisher of the diocesan newspaper. She served as president of the Catholic Press Association of the United States and Canada from 1986 to 1988. And how many Catholics from the U.S. – lay, consecrated or ordained, and especially female – have addressed a pope and the world’s bishops gathered at the Vatican? Albina did, and eloquently so, at a world synod in 1987.

These are all notable accomplishments. But today I’m remembering Albina as like those firefighters who fought bravely to save Notre Dame Cathedral. Why? Because she recognized that, as tragic as an instant loss of historic treasure through fire or other calamity can be, also tragic is the silent, invisible loss of our Catholic historical memory through benign neglect or, worse, apathy.

And so, during Albina’s more than two decades with The Catholic Post, she edited a weekly “Looking Back” column filled with nuggets from local and world headlines culled from 10, 25, and 50 years ago. Further, with a God-given gift of painting with words, her general reporting frequently took readers into long forgotten or neglected cemeteries or back in time to meet circuit-riding pioneer priests. As the Diocese of Peoria prepared to celebrate its centennial in 1977, Albina may have been at her finest. One full-page feature, for example, recalled the many tiny, frame churches that sprang up on the central Illinois prairie in the 19th century and for the most part are now gone. These structures were far from the majesty of Notre Dame Cathedral, but their presence mattered. The same King of the Universe was present and was preached within them.

Like those Paris firefighters, Albina would not let these humble Peoria treasures disappear from memory.

In an interview last October, Albina – who at 91 was working to complete a book on a Catholic branch of Abraham Lincoln’s family tree – said this:

“I still love history. I am history. We are all history. The minute you draw breath, you’re history. But whether anybody will remember or think about me and our generation as a whole will all depend on the history of the world and what is written.”

Albina had outlived most of her contemporaries. Her funeral, like those of many advanced in years, was a small affair, despite the significant history embodied in her slight frame, despite the treasure that it once held.

May her passing call to mind those archivists, historians, photographers, journalists and authors who daily fight to preserve the beauty of what has gone before us in our church – even as the Holy Spirit writes new chapters. Unlike the Paris firefighters, the eyes of the world are not on them as they confront the passage of time and the silently smoldering embers of neglect, indifference, or ignorance. I proudly stand among them today to advance and preserve the legacy of the beautiful, treasured and yes, historic gift of Albina Aspell. — Thomas J. Dermody