Albina Aspell, former editor and publisher of The Catholic Post and a past president of the Catholic Press Association of the United States and Canada, died in Peoria on April 11, 2019, two days after observing her 92nd birthday.

Burial will be at Resurrection Cemetery in Peoria.

Considered a pioneer for women in the Catholic press, Aspell served on The Catholic Post staff from 1974 until her retirement in 1995. Originally a staff writer, she was later feature editor and assistant editor before being named by Bishop Edward W. O’Rourke in 1982 as the first lay editor in the diocesan newspaper’s history. She would become its first lay publisher a decade later, and also served as communications director for the Diocese of Peoria in the early 1990s. 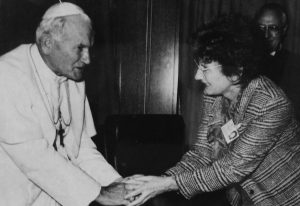 Albina Aspell is greeted by Pope John Paul II in 1987 while she was at the Vatican to address the world Synod of Bishops in her role as president of the Catholic Press Association of the United States and Canada. (CNS file/Arturo Mari)

Aspell was elected president of the Catholic Press Association in 1986 and served a two-year term. It was in that capacity that she addressed Pope John Paul II and church leaders from around the globe who gathered at the Vatican in October of 1987 for a world Synod of Bishops.  She encouraged the church to be open in providing information.

“A free flow of information has the power to avert problems; it can stop rumor and erase suspicion,” said Aspell. “Access to information and newsmakers in the church is the lifeblood of Catholic communications.”

She received the Catholic Press Association’s highest honor – the St. Francis de Sales Award – in 1992 for her “distinctive and eloquent leadership in the Catholic press and for her role as a dynamic force and inspiration.”

Upon her retirement, Archbishop John P. Foley — then president of the Pontifical Council for Social Communications — spoke for many when he said Aspell brought to the Catholic press “a touch of grace . . . forthright but never abrasive, refined but never condescending, prayerful but never pietistic, well-informed but never domineering, professional but never officious.” He called her “an extraordinarily cultured, prayerful, professional, gracious, sensitive Catholic lady.”

Tom Dermody, Aspell’s successor as editor of The Catholic Post who continues in that role, said such qualities remained her hallmark even as she endured the progression of Parkinson’s disease in recent years.

“Al was a gifted, faith-filled wordsmith, and she retained that gift until her final moments,” said Dermody. He noted that, in an interview conducted last fall, Aspell said that despite her increasing physical limitations she was at “the best stage in life” because of an awareness “that God is here and he’s not going to let me go.”

Aspell’s last column for The Catholic Post, a 2019 Catholic Press Month reflection on the current state of journalism and the Catholic press, was published in February.

“Because it isn’t just about church suppers and bake sales,” she wrote, “the effort to write, produce and deliver news about our faith is not always easy. Scandals in the church are as real as church suppers (but thankfully not as frequent!) and need to be addressed in print. Bad news happens. Ignoring it or an attempt to hide it will not make it go away.”

Born April 9, 1927, in Cleveland, Ohio, to Ignatius and Anna (Cesar) Molek, who had emigrated from Slovenia, Aspell joined the staff of The Cleveland News upon graduating from John Adams High School. During her nearly a decade as a Cleveland News writer, she continued her education in journalism at John Carroll University in University Heights, Ohio. She later served as a correspondent for Fairchild Publications, publishers of Women’s Wear Daily.

She often credited Msgr. R. G. Peters – her predecessor as editor and publisher of The Catholic Post — for his profound influence on her career.

An avid reader, she was the founder of Guildhall Publishers. The Peoria-based book company published several editions of “The New Question Box,” compilations of question-and-answer columns by Father John Dietzen for Catholic News Service. The 1991 edition won first place among popular presentations of the Catholic faith in annual competition sponsored by the Catholic Press Association. 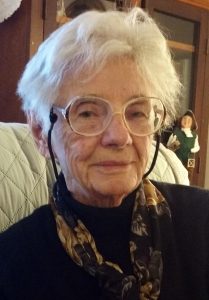 She was also a history enthusiast, especially interested in the life of Abraham Lincoln and the Catholic branch of the Lincoln family tree.

Aspell died at Apostolic Christian Skylines in Peoria, where she had moved in recent days following a hospitalization.

She is survived by a son, William (Samneang) Aspell, of Granite Bay, California; a daughter, Ann Aspell (Leigh Seddon), of Montpelier, Vermont; a daughter-in-law, Roxanne Aspell, of Peoria; and four grandchildren, Emily Seddon, Anna Seddon, Conor Aspell, and Colin Aspell. In addition to her husband and parents, she was preceded in death by a son, Daniel, of Peoria, and a sister, Anne Ranik.

In lieu of flowers, memorials may be made to a favorite charity or to the Franciscan Monastery of the Holy Land in America in Washington, D.C.

In the 2018 interview, when asked what she expected heaven to be like, Aspell had a quick retort.

“Prepare to be surprised,” she said.