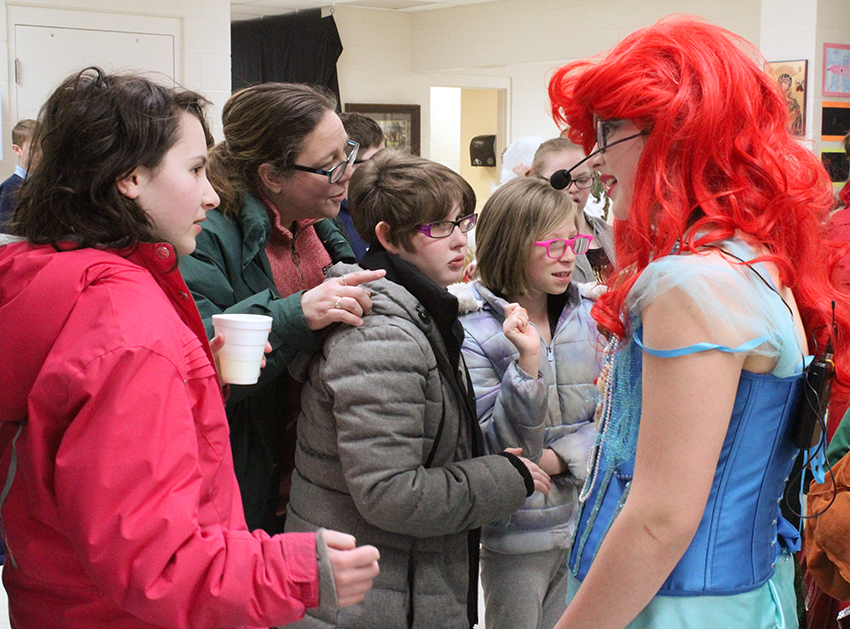 St. Mary School in Kickapoo invites students from Bartonville Grade School and residents from Proctor Home in Peoria to be their guests at dress rehearsal each year. Here, Ariel (Ella Rolig) visits with audience members at a reception after the preview. (The Catholic Post/Jennifer Willems)

KICKAPOO — To find the students at St. Mary School on March 15, you had to look “Under the Sea” as they presented their dress rehearsal of “The Little Mermaid Jr.” for residents from Proctor Home in Peoria and students with special needs from Bartonville Grade School.

It was their first time performing the show in front of a live audience and they were excited, said Rick Pantages, principal. 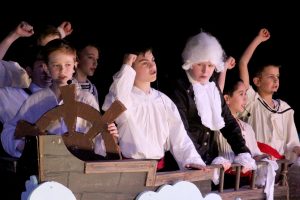 Prince Eric (Lawson Alwan) leads the sailors in a song about what might be under the sea during the opening scene of “The Little Mermaid Jr.” at St. Mary School in Kickapoo. (The Catholic Post/Jennifer Willems)

“It’s my favorite day of the year,” he told The Catholic Post a few minutes before curtain time. “The kids will go out and have a meet-and-greet and they’ll sign autographs and have their pictures taken with the kids.”

Pantages said 50 of the school’s 62 students, kindergarten through eighth grade, were involved in the show — although the numbers looked a little iffy when the flu started going around the school. All went well, though, and he was looking forward to having full houses for the two evening performances that weekend.

This was the eighth musical presented by the Kickapoo school. Loaning them costumes were the Peoria Christian High School Drama Department and the Community Children’s Theatre, which also offered pieces of the set to St. Mary School.