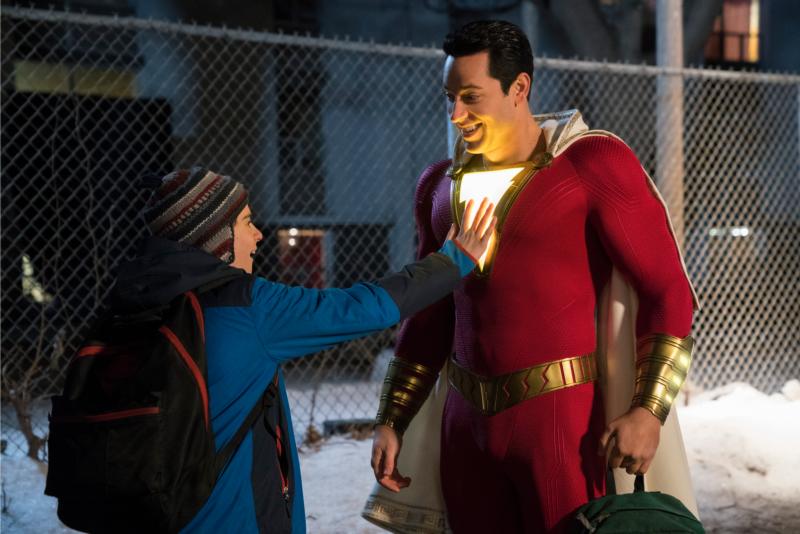 Endowed by a wizard (Djimon Hounsou) with the ability to transform himself, by dint of the titular exclamation, into a superhero with the body of an adult (Zachary Levi), a 14-year-old foster child (Asher Angel) does battle with a formidable villain (Mark Strong) who wants the lad to surrender his newfound powers to him.

Though it eventually becomes almost exclusively an action picture, director David F. Sandberg’s DC Comics-based origin story begins with an enjoyable overlay of comedy as the protagonist and his physically challenged best friend (Jack Dylan Grazer) marvel at his ability to shoot electricity from his hands and perform similar nifty stunts. Family life is exalted over egotistical self-reliance as Angel’s character learns to use his gifts responsibly, and viewers of faith will appreciate brief scenes of prayer and an implicitly pro-life message about the dignity of the disabled. Some mischief enabled by the main character’s grown-up guise, however, makes this questionable fare even for older teens.

Much stylized violence with a few gruesome sights, underage drinking, brief sexual humor, some of it involving a strip club, at least one use of profanity and a milder oath, about a dozen crude and crass terms. The Catholic News Service classification is A-III — adults. The Motion Picture Association of America rating is PG-13 — parents strongly cautioned. Some material may be inappropriate for children under 13.