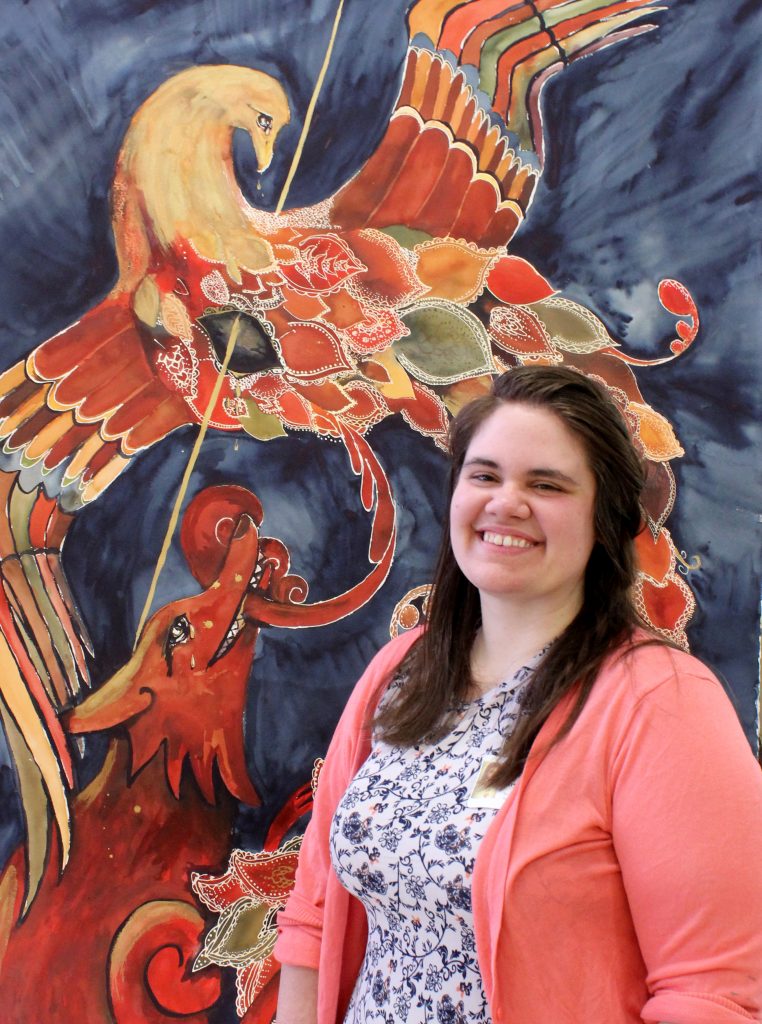 Taryn Watkins has made some long and arduous pilgrimages in her young life, traveling 500 miles through France and Spain on the Camino de Santiago, and 1,200 miles from Canterbury, England, to Rome along the Via Francigena.

There have been shorter pilgrimages, too, such as the mile she used to walk intentionally from where she lived in LaSalle to St. Hyacinth Church.

Her art also has taken her on spiritual journeys that she has shared in her murals of St. John Paul II, St. Teresa of Kolkata, St. Maximilian Kolbe and St. Faustina at the St. John Paul II Catholic Newman Center in Normal, and of the crucifixion for Alleman High School in Rock Island. In early March, it took her to Farrell Hall at St. Pius X Church in Rock Island where she displayed her work at the Art of Faith Show and Sale.

Currently she is completing her second year as the art teacher at St. Philomena School in Peoria, helping young disciples make their own connections between art and spirituality.

All of those pilgrimages lead to one place, however.

“I’m always reminded of the tabernacle back home,” Watkins told The Catholic Post. “That’s the whole point, is to have a greater awareness . . . that Jesus is there.”

And if that’s true, it makes her life a pilgrimage.

“My homeland is heaven — that is where I’m going,” Watkins said.

That realization took a little time for the woman who grew up in Sycamore, near DeKalb.

Watkins came to Illinois Wesleyan University in Bloomington to study biology and then Russian, with the intention of getting a degree in international studies. When she transferred to Illinois State University, she went with her lifelong passion and earned a degree in fine art with a concentration in painting. 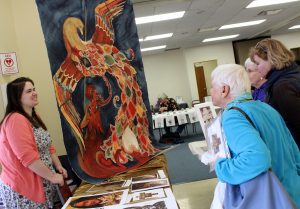 Taryn Watkins speaks with visitors to her display at the Art of Faith sacred art show and sale in early March at Farrell Hall of St. Pius X Parish in Rock Island. (The Catholic Post/Jennifer Willems)

“I’ve always been doing art. But it was only after going to the Newman Center, discovering prayer, discovering the Lord’s presence in a way I had never experienced before and the reality of God . . . that I understood this is what beauty is for,” she said. “That’s what beauty actually is, is this truth, God, who draws you to himself.”

It was while she was studying at ISU that she made her first pilgrimage to Italy and began to consider a vocation to consecrated life.

“That pilgrimage was one of the most important moments of my life,” she said. “I was struggling a lot at the time and the Lord revealed his presence in a way that made me desire to follow him, even if I never experienced his presence again. He was good, he existed, and he was true.”

Watkins eventually entered a Carmelite monastery, but says the Lord had other plans for her. She went to LaSalle to live a contemplative life and pray, while doing some art to support herself.

In 2010, she made the Camino de Santiago and discovered that she loved walking pilgrimages.

“There’s something about the simplicity of the life, about the challenge,” Watkins said. “It’s a difficult thing to do.”

During the Year of Mercy in 2015, she decided to walk the Via Francigena and take the prayer intentions of people she knew with her. “I wanted to offer it, as well, for the souls in purgatory,” she told The Post.

After walking for 82 days, she found herself moving very quickly as she approached Rome and was one of the first pilgrims at St. Peter’s Basilica that day.

“I went through the Holy Door on my knees,” Watkins recalled. “I’m still trying to process all the things that the Lord is doing with that (pilgrimage).”

For now, she is using any little space she can find in her living room to work on her art and navigate the distance between how some of the ugliest moments of faith — the crucifixion, for example — can be the most beautiful, too.

“It’s the moment of sacrificial love, it is the moment of union of Christ and the Father,” Watkins said. “That’s what I’m trying to do in my art, to understand in some small way how that can be.”