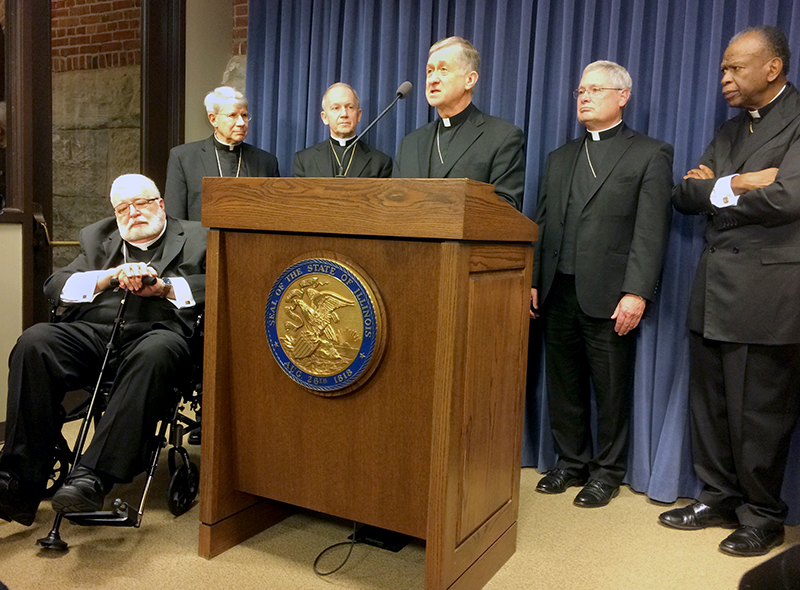 Cardinal Blase J. Cupich of Chicago gives the opening statement at a press conference hosted by the Catholic Conference of Illinois regarding extreme abortion legislation being considered by the Illinois General Assembly. It was held at the State Capitol in Springfield on March 28 and included (from left) Bishop Daniel R. Jenky, CSC, of Peoria; Bishop R. Daniel Conlon of Joliet; Bishop Thomas J. Paprocki of Springfield; Bishop David J. Malloy of Rockford; and Bishop Edward K. Braxton of Belleville. (The Catholic Post/Jennifer Willems)

SPRINGFIELD — Hoping to avoid the “devastating” impact proposed abortion legislation would have on women and their unborn children, as well as the conscience rights of health care professionals, the bishops of Illinois have called on lawmakers to reject the bills, which have been called “extreme.”

“Who lives? Who dies? Who decides? The state and its leaders have not only a responsibility but also a vested interest in defending the sacredness and value of every human life,” said Cardinal Blase Cupich of the Archdiocese of Chicago in an opening statement at a press conference at the State Capitol on March 28. 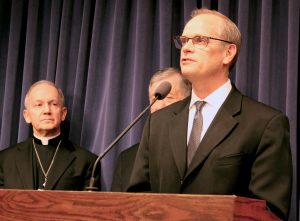 “We’re here today because there are two bills in the Illinois House and the Illinois Senate that deal with abortion. We are here today to oppose those bills,” said Robert Gilligan, executive director of the Catholic Conference of Illinois. (The Catholic Post/Jennifer Willems)

“We must view this proposed legislation as the latest attack on human dignity, motivated by the dominant cultural ethic that asserts the lives of unborn children have no value and sanctity when weighed against the wishes and needs of others,” according to Cardinal Cupich.

He was talking about House Bill 2495 and Senate Bill 1942, which would establish the Reproductive Health Act. This would overhaul current abortion laws and strip the unborn child of any rights, he explained.

“Proponents of this legislation say it is necessary to safeguard access to abortion in the event Roe v. Wade is overturned,” Cardinal Cupich said, but pointed out that House Bill 40, signed by Gov. Bruce Rauner in 2017, had addressed this.

Two other pieces of legislation, House Bill 2467 and Senate Bill 1594, would repeal the Parental Notice of Abortion Act for minors seeing an abortion, something Cardinal Cupich called “a solution in search of a problem.”

“The current parental notification requirement can be waived if a court finds a minor sufficiently mature and well enough informed to decide to have an abortion,” he said.

“It is critically important that each of us, but especially our elected leaders, defend the inherent and inalienable value of every human life,” Cardinal Cupich emphasized. “I call on our legislators to reject these harmful bills.”

Not only is the lack of protection for the unborn shocking, but so is forcing health care professionals to violate deeply held religious beliefs by assisting with abortions, said Dr. Jillian Stalling, an obstetrician/gynecologist from OSF HealthCare in Peoria. 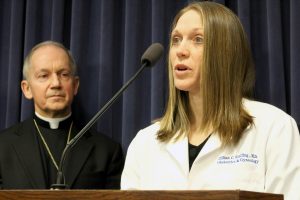 Dr. Jillian Stalling, an obstetrician/gynecologist at OSF HealthCare in Peoria, expresses her concern about how proposed abortion legislation in the Illinois General Assembly would affect the lives of unborn babies and their mothers, and violate the conscience rights of health care professionals. Looking on is Bishop Thomas J. Paprocki of Springfield. (The Catholic Post/Jennifer Willems)

The Reproductive Health Act would repeal the Illinois Abortion Performance Refusal Act, which protects doctors, nurses and hospitals who refuse to participate in an abortion, she said.

“As physicians, we take an oath to do no harm. We offer patients an objective treatment plan based upon medical training and scientific testing,” Dr. Stalling explained. “It has been a longstanding practice, however, to respect doctors’ rights of conscience when they are asked to perform a morally objectionable procedure.”

Saying she loves taking care of women and delivering babies, Dr. Stalling made it clear that if the legislation passes she would not leave the medical profession or “abandon women who need good health care.”

“But I will refuse to participate in an abortion,” she said. “I ask lawmakers to preserve our conscience rights and reject this legislation.”

After the press conference, Dr. Stalling told The Catholic Post that forcing health care providers to violate their conscience would, over time, affect their ability to properly care for patients because they would be torn internally, living two lives.

She fears increased rates of anxiety, depression and suicide for these people, who are already under a great deal of stress.

“NOT OUT OF THE WOODS”

Bishop Jenky said the impact on Catholic hospitals and those who staff them, whether or not they are Catholic, would be “devastating.”

“It is one thing to assert rights that our faith might not agree with, but it’s another to force religious institutions and Catholic doctors,” he told The Post. 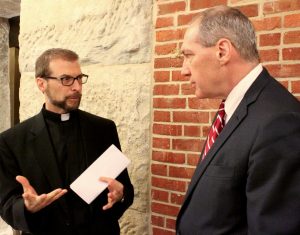 Msgr. Mark Merdian, pastor of St. Pius X Parish in Rock Island and chair of the Diocesan Health Care Committee, visits with John M. Breen, a member of the Catholic Conference of Illinois board, before the press conference. Msgr. Merdian, who is also a member of the Illinois Catholic Health Association, said, “If we’re trying to create a culture in our United States of respect, killing people will not create that culture. It’s actually going to harm our culture and it harms women in a terrible way.” (The Catholic Post/Jennifer Willems)

Bishop Jenky asked Catholics to keep up with the issue and to express their convictions if the time comes.

“Given the margins in the House and the Senate, we are not out of the woods by any means,” he said. “We have to oppose this.”

In a letter that will be read at Masses in churches across central Illinois this weekend, Bishop Jenky asks people to “join me and my brother bishops in an effort to defeat this radical departure from current law and practice in our state. Please reach out to your State Representative and Senator to urge defeat of these bills.”

The letter also advises people to visit the website of the Catholic Conference of Illinois, ilcatholic.org/take-action/action-center, to find contact information for their elected officials or to learn more about the proposed legislation.

EDITOR’S NOTE: To view an archived video of the press conference, click here.