Catholic schools honor memory of one of their own on St. Patrick’s Day 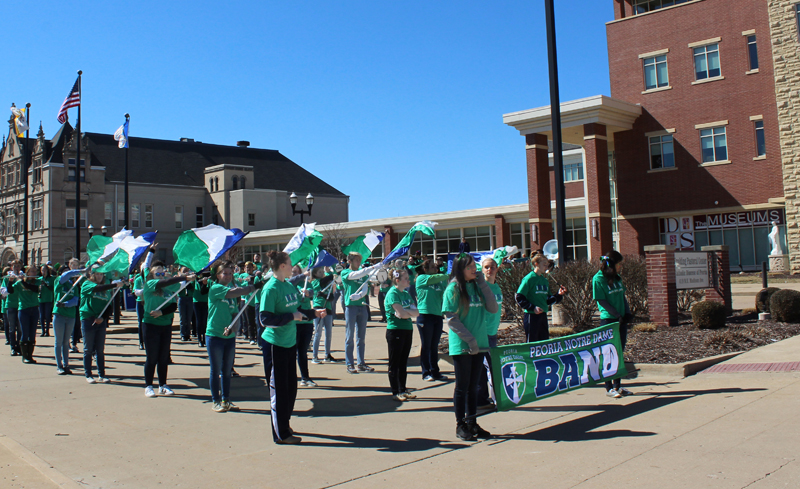 The Peoria Notre Dame Band prepares to step off from the mall in front of the Spalding Pastoral Center in Peoria on March 17. They led representatives from 11 more Catholic schools in who marched in the St. Patrick's Day Parade in Peoria in honor of principal Randy Simmons, who died Feb. 19. (The Catholic Post/Jennifer Willems)

Catholic schools from the Peoria area and surrounding communities had their own gathering of the clans March 17 as they marched as one behind Bishop Daniel R. Jenky, CSC, through the streets of downtown Peoria for the St. Patrick’s Day Parade. They did it to honor the memory of one of their own — Randy Simmons, principal of Peoria Notre Dame High School, who died on Feb. 19. 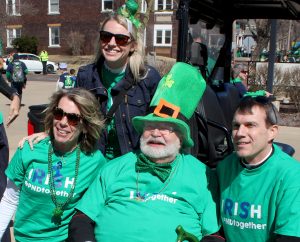 Patti Simmons and her daughter, Kate Smith, pose with Bishop Daniel R. Jenky, CSC, before the St. Patrick’s Day Parade in Peoria begins on Sunday. With them is Father David Richardson, pastor of St. Philomena Parish. (The Catholic Post/Jennifer Willems)

Everyone, including Bishop Jenky, wore a Kelly green t-shirt with IRISH and #PNDtogether on the front and a quote from Lou Holtz, one of Simmons’ favorites, on the back: “Do the right thing, do the best you can, and always show people you care.”

The shirt was designed by Katie O’Russa, a Peoria Notre Dame graduate and member of St. Mark Parish in Peoria. More than 2,000 shirts were sold in just three days during the first week of March.

Proceeds will go to the Randy Simmons Tuition Assistance Fund.

(On March 19, sale of the Randy Simmons Memorial Shirt reopened. Orders will be taken through April 7, with delivery planned for the week of April 22. For more information, go to https://simmons-19.itemorder.com/sale.)

“As difficult as it is at this time to participate in events like the Peoria Notre Dame Gala and the St. Patrick’s Day Parade without Randy, it is comforting to witness the support of the Catholic community,” said his wife, Patti Simmons, who walked with the students and families from her parish, St. Philomena in Peoria. “All the love and energy expressed to me and our family gives me the strength to continue celebrating Randy’s life and memory.”

“It has been a blessing to experience and see the outpouring of love and support from our Catholic schools community here in the area,” said Sister Sara Kowal, SCTJM, who succeeded Randy Simmons as principal six months earlier than planned.

He had announced, on Feb. 1, that he would retire at the end of this school year.

“John Paul II said that ‘suffering unleashes love’ and we have seen the truth of that in the past few weeks,” she told The Catholic Post. “We are a family in Christ, and during these times, this family has become even closer.” 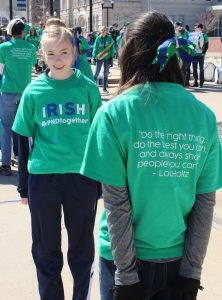 Peoria Notre Dame freshman Mary Sanderson and senior Rachel Ehrhart show what is on the front and back of the special shirts that were made for Catholic school participants to wear for the St. Patrick’s Day Parade in Peoria on March 17. (The Catholic Post/Jennifer Willems)

The Simmons family, as well as Sister Sara and Dr. Susie Cicciarelli, assistant principal, were consulted about details for the shirts and having the schools participate in the parade. Bishop Jenky, chancellor Patricia Gibson, and Dr. Sharon Weiss, superintendent of Catholic schools for the Diocese of Peoria, also gave their approval.

Dr. Noreen Dillon, principal of St. Mark School in Peoria, worked with the other Catholic school principals in Region I to coordinate things with the St. Patrick Society of Peoria. As the parade stepped off, there were more than 900 representatives not only from Peoria Notre Dame, but Holy Family, St. Jude, St. Mark, St. Philomena, and St. Vincent de Paul in Peoria; St. Thomas the Apostle in Peoria Heights; St. Edward in Chillicothe; St. Mary in Metamora; Blessed Sacrament in Morton; St. Joseph in Pekin; and St. Patrick in Washington.

They followed Bishop Jenky and a float sponsored by the Heart of Peoria Catholic Community, marching behind a banner that said, “We support PND.”

“What a wonderful way to celebrate the life of Randy Simmons through the participation of our Peoria-area Catholic school students in the St. Patrick Day Parade. He would have loved it,” Weiss told The Post.

“And having the bishop join the students was ‘icing on the cake,’” she said. “I am so proud of our principals and students for putting actions to Christ’s words, ‘Love thy neighbor.’”

Before leading the walking tribute, Bishop Jenky welcomed hundreds of people to St. Mary’s Cathedral for a Mass in honor of “Ireland’s great apostle.”

St. Patrick “was unswerving in his loyalty to Jesus Christ, the Gospel, and the holy Catholic Church,” the bishop said. “Let us, on his feast day, determine to imitate his good example.” 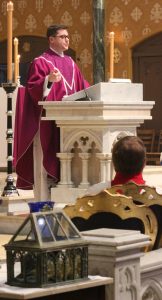 Standing just a few feet from a relic of St. Patrick (foreground), Father Andru O’Brien urged those gathered at St. Mary’s Cathedral in Peoria to follow the saint’s example. (The Catholic Post/Jennifer Willems)

Bishop Jenky entrusted the homily to one of the newest priests of the Diocese of Peoria, Father Andru O’Brien, parochial vicar of St. Jude in Peoria and St. Mary of the Woods in Princeville.

“I’m here for one reason and one reason only: my name is O’Brien,” the young priest said, drawing laughter.

Father O’Brien said that while he had known the legends about St. Patrick driving the snakes out of Ireland and using a shamrock to explain the Holy Trinity, it was only recently that the saint became someone real for him. He credited the realization to a cover-to-cover reading the Catechism of the Catholic Church, which says all who have welcomed Christ’s call and freely responded to it must proclaim the Good News everywhere in the world.

This is what St. Patrick did, he said.

“It dawned on me for the first time that I would not have my faith were it not for this man going to Ireland, preaching the Gospel, and converting my ancestors,” said Father O’Brien, standing just a few feet from a relic of St. Patrick that had been carried into the cathedral at the beginning of Mass.

“But anyone who experiences God’s glory is going to have to experience his cross,” Father O’Brien said. “After converting thousands . . . he became a slave like St. Paul, imprisoned on behalf of his faith, persecuted because of his faith. He saw that as a trial he had to undergo on behalf of the Gospel.”

He urged his listeners to honor St. Patrick by living the same way — “faithful to the Gospel, faithful to the commandments, praising God when we experience his glory, but also undergoing trial for the sake of the Gospel.”

“This man devoted himself to Christ, praying night and day for the people of Ireland. His prayers continue for us in heaven,” Father O’Brien said. “May we respond both generously and faithfully to all of God’s commandments.”

For more photos of the St. Patrick’s Day Mass and Parade, see the album on The Catholic Post’s Facebook page.