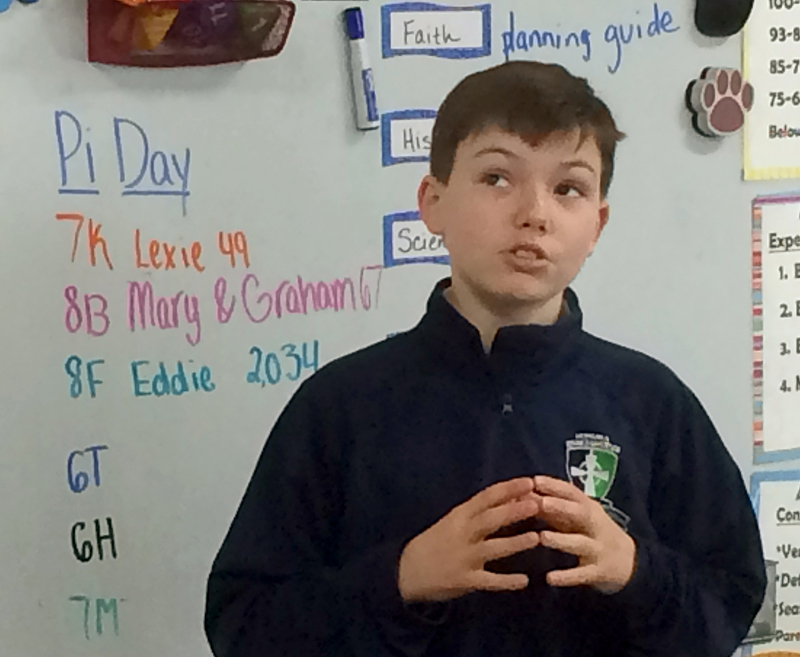 Eighth-grader Eddie Couri of St. Philomena School in Peoria demonstrates -- for only two minutes -- his ability to recite 2,034 of the digits that make up the mathematical constant known as pi. It took him 25 minutes to reach his record-breaking total on March 14, Pi Day. Pi begins with 3.14159. (The Catholic Post/Jennifer Willems)

Most people probably would rather spend 25 minutes eating pie than reciting as many digits as they could for pi, the mathematical constant that is used to determine the area and circumference of a circle. Then again, most people aren’t Eddie Couri. 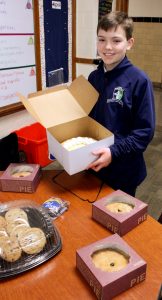 An eighth-grader at St. Philomena School in Peoria, Couri was able to recite 2,034 digits of pi in 25 minutes as Pi Day began – breaking his own record of 1,122 digits last year. He had memorized just 1,500 as the week began and had 1,700 committed to memory by March 12.

“This year I wanted to get to 2,000, and I did,” said the future mechanical or aeronautical engineer.

“It’s part of math, it’s part of geometry, and it’s part of when we study circles,” she told The Catholic Post. “They know it’s a digit that goes on forever. It’s an irrational number. It’s non-terminating and non-repeating.”

Kincaid has been hosting the Pi Day competition for five years in her junior high math classes, with different kinds and sizes of pies as prizes. They include fruit pies, MoonPies, and cookie pies.

Couri has been taking the Pi Day challenges since he was in the fifth grade and has won it every year since the sixth grade. By this time Kincaid knows that Key Lime Pie is his favorite, and he asked, only half joking, if he could eat it for lunch.

“Maybe just stick your finger in the whipped cream for now,” she replied with a smile.

Couri said he usually starts memorizing in January, with crunch times being one month and then one week away from the March event.

“A month away I think, ‘I’ve been going light and I need to start doing more and more memorization,’” he explained. “A week away I’m like, ‘I need to make sure I know everything.’”

His mother, Amy Couri, helps with that, listening to him recite what he’s learned and making pencil marks when something isn’t quite right.

“If I mess up, I won’t be able to continue on because they all fit together. I find a way for them to fit together. . . . Numbers are actually kind of easy.”

“If I mess up, I won’t be able to continue on because they all fit together,” the young mathematician said. “I find a way for them to fit together. Nobody else sees that. . . . Numbers are actually kind of easy.”

He also carries them on a sheet in his pocket to get some studying in when he’s able.

“On the actual day, I feel more calm, because I know it. I can do it,” he told The Post.

AHEAD OF THE CURVE 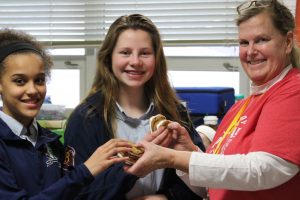 Couri has been ahead of the curve in math since the fifth grade, when he was sent to Kincaid to study with the sixth-graders for one semester. His scores were so high, they found an online program called the Illinois Virtual School that allows him to do high school-level math and beyond.

Last year he took geometry and admits, “I’m not a huge fan of geometry. I much prefer algebra.”

This year he is studying algebra II and trigonometry with classmate Michael Carson, who is also enrolled in the Illinois Virtual School.

Couri plans to go to Peoria Notre Dame High School next year. He hopes to be able to start with calculus, but is OK with taking algebra II or trigonometry again to make certain he has everything he needs.

“I want to get as much math in as I can, because I enjoy it and I find it’s very helpful in life,” he said.

Other first place winners in Kincaid’s Pi Day contest were: seventh-graders Ella Coulter, with 303 digits, and Emery Ribordy, with 147, while eighth-graders Maddie MacGregor and Molly Schliepsiek tied at 123.

Also earning pies for pi were eighth-graders Mary Breitbach and Graham Leary, who tied with 67; sixth-grader Addison Leffler, with 66 digits; and seventh-grader Lexie Beiermann, with 49.