St. Margaret's Hospital is a 69-licensed bed facility in Spring Valley. It was founded in 1903 by seven Sisters of Mary of the Presentation. (Photo from aboutsmh.org)

SPRING VALLEY — St. Margaret’s Health in Spring Valley, a member of SMP Health System, and Illinois Valley Community Hospital (IVCH) in Peru announced March 4 that they have signed a non-binding Letter of Intent to consolidate their operations and form a regional health network.

While emphasizing that this is the beginning of a process, the two hospitals said that the resulting health care delivery system would be in the Catholic tradition. As an affiliate of SMP Health System, Illinois Valley Community Hospital would follow the Ethical and Religious Directives for Catholic Health Care Services.

In the coming months, the hospitals will perform due diligence and define details of the proposed affiliation. Following approval from church and regulatory authorities, the goal of the two organizations is to sign a binding Definitive Agreement in the months ahead.

“St. Margaret’s and IVCH have proudly served this region for more than 100 years,” said Tim Muntz, president and CEO of St. Margaret’s. “The delivery of care has changed dramatically over that time and we believe we can provide our patients even better care close to home by coming together.”

“IN SPIRIT OF SMP SISTERS”

Indeed, there have been many changes since seven members of the Sisters of Mary of the Presentation arrived in Spring Valley from France in 1903 and began operating a five-bed ward in a two-story frame house. Within five years, construction began on a three-story, 25-bed new hospital named St. Margaret’s in honor of the mother of Father John Power, then pastor of Immaculate Conception Parish in Spring Valley, who had welcomed the Sisters when they were expelled from France by an anti-religious government. Father Power donated 25 acres of land for the Sisters to begin their new ministry.

There have been numerous additions over the years at the hospital campus at 600 E. 1st St., the most recent being a $5.5 million emergency room expansion completed in 2016. St. Margaret’s also operates clinics throughout the Illinois Valley, including one built in Oglesby last year. 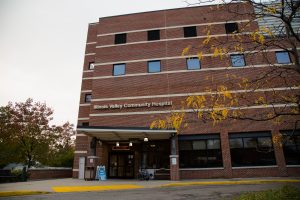 Meanwhile, Illinois Valley Community Hospital also has a Catholic facility in its history. Now located at 925 West St. in Peru, it was formed in 1975 from the merger of Peoples Hospital in Peru and St. Mary’s Hospital in LaSalle, which was established in 1887 by the Franciscan Sisters of the Sacred Heart.

“By IVCH joining St. Margaret’s and becoming part of the SMP Health System, the combined network will be able to deliver high quality, efficient and coordinated care locally beyond what we were able to do separately,” said Tommy Hobbs, CEO of Illinois Valley Community Hospital.

St. Margaret’s was reportedly approached by IVCH to consider an affiliation. No immediate changes are expected as the process moves forward, with both hospital campuses continuing operation.

The hope was expressed that a new hospital might eventually be built for the region.

“We are excited about this opportunity to provide compassionate care to the communities and surrounding areas served by St. Margaret’s and IVCH, in the same spirit of the SMP Sisters,” said Aaron Alton, president and CEO of SMP Health Systems.

There are no immediate plans for staff reductions. The two hospitals account for a combined 1,400 jobs, full- and part-time.