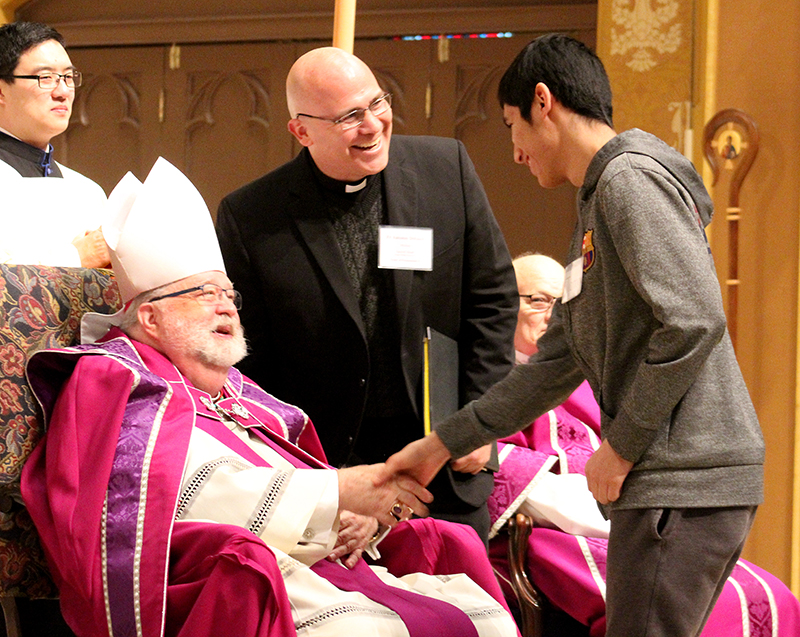 Bishop Daniel R. Jenky, CSC, greets Tony Raya from St. Mary in Moline, who will be received into the full communion of the Catholic Church at the Easter Vigil. Presenting him is Father Antonio Dittmer, pastor. (The Catholic Post/Jennifer Willems)

Judy Garmon of St. Mary Parish in Hampton couldn’t stop gazing up at the ceiling of St. Mary’s Cathedral in Peoria.

“It looks like the heavens,” she said, asking about the symbols painted among the stars. 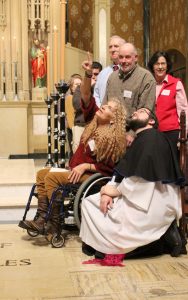 Judy Garmon of St. Mary in Hampton asks pontifical server Stephen Berlinger a question about a detail in the ceiling of St. Mary’s Cathedral after the Rite of Election and the Call to Continuing Conversion on March 9. (The Catholic Post/Jennifer Willems)

Bishop Daniel R. Jenky, CSC, smiled broadly as he saw Garmon and 285 other people who are preparing to be received into the Catholic Church gathered under that heavenly field on Saturday, March 9, and Sunday, March 10, for the Rite of Election and the Call to Continuing Conversion.

On Sunday afternoon, he spoke of the deep faith of the people whose paths lead them to the Catholic Church and said, “You make the heart of your bishop glad.”

Of the 286 men, women and children who traveled to Peoria for the prayer services, 84 were catechumens — those seeking to be baptized and confirmed, and receive the Eucharist for the first time at the Easter Vigil on April 20. As their names were called by their parish priest or RCIA coordinator, they came to the center aisle of the cathedral.

Bishop Jenky sought the affirmation of their godparents first, asking if the catechumens had “faithfully listened to God’s word,” “begun to walk in God’s presence,” and “shared the company of their Christian brothers and sisters and joined with them in prayer.” He also asked the assembly if they were ready to support the catechumens in “prayer and affection.”

Receiving assurances in both instances, the bishop led a round of applause.

Addressing the catechumens, Bishop Jenky asked, “Do you wish to enter fully into the life of the church through the sacraments of baptism, confirmation and the Eucharist?”

Responding “we do,” the catechumens were declared to be “members of the elect, to be initiated into the sacred mysteries at the next Easter Vigil.” 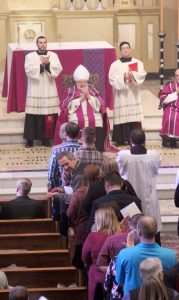 Bishop Daniel R. Jenky, CSC, leads the applause for the candidates for full communion with the Catholic Church during the Rite of Election and the Call to Continuing Conversion on March 10 at St. Mary’s Cathedral. Looking back to show support for his parishioners is Father Jeffrey Stirniman of Holy Trinity and Historic St. Patrick in Bloomington. (The Catholic Post/Jennifer Willems)

“My dear catechumens, God is always faithful to those he calls; now it is your duty, as it is ours, both to be faithful to him in return and to strive courageously to reach the fullness of truth, which your election opens up before you,” the bishop said.

They were invited to come forward with their parish presenters, to be greeted personally by Bishop Jenky.

ANOTHER REASON TO SMILE

The 202 candidates, those who are baptized and seek to complete their Christian initiation or to be received into the full communion of the Catholic Church, were then called to the center aisle of the cathedral. Applause filled the church again after their sponsors affirmed that the candidates were ready for the sacraments of confirmation and Eucharist, and the assembly offered to support them in “faith, prayer and example.”

“Candidates, the church recognizes your desire to be sealed with the gift of the Holy Spirit and to have a place at Christ’s Eucharistic table. Join with us this Lent in a spirit of repentance,” Bishop Jenky said. “Hear the Lord’s call to conversion and be faithful to your baptismal covenant.”

He also greeted them personally, shaking their hands and joking with the children.

With the liturgies being held during March Madness, it was only natural that a basketball reference would be made. It came from Msgr. Brian Brownsey, who introduced the candidates from St. Joseph Newman Center at Bradley University, “home of the new MVC champions.”

Msgr. Brownsey is pastor of St. Mark Church in Peoria and chaplain at the Newman Center at Bradley University. The Missouri Valley Conference title game finished as the Rite of Election started on March 10.

As is his tradition, Bishop Jenky returned to the sanctuary after both liturgies to pose for photos as long as people requested them.

The Rites of Election and the Call to Continuing Conversion are generally held on the First and Second Sundays of Lent. Because St. Patrick’s Day falls on the Second Sunday of Lent this year, they took place over one weekend to accommodate the St. Patrick’s Day Mass and parade, which lines up in the streets around St. Mary’s Cathedral.

EDITOR’S NOTE: More photos from the Rite of Election will be posted to The Catholic Post’s site on Facebook.