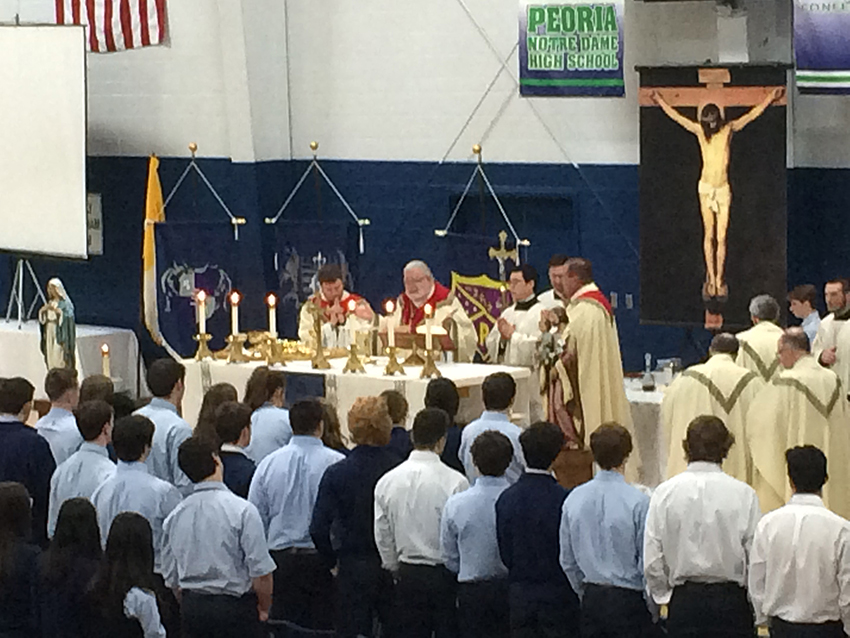 Bishop Daniel R. Jenky, CSC, joined the Peoria Notre Dame High School community Feb. 20 to offer a Mass in remembrance of principal Randy Simmons, who died unexpectedly on Feb. 19. Many of the priests from Peoria-area parishes concelebrated and provided spiritual support and comfort to the students after the liturgy. (The Catholic Post/Jennifer Willems)

After an emotional week for the Peoria Notre Dame High School community, family and friends, principal Randy L. Simmons was laid to rest on Feb. 26.

A funeral Mass was offered at St. Philomena Church in Peoria, with Father David Richardson, pastor, as the celebrant and homilist. Several priests, including Father Kyle Lucas, chaplain at Peoria Notre Dame, and Msgr. Mark Merdian, former president of the school, concelebrated. 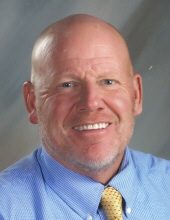 In his homily, Father Richardson said the week between Simmons’ death and funeral had been like Holy Week, but with a lot of Good Fridays. Hoping to point toward Easter and resurrection joy, he spoke of the friendship he shared with Simmons, who lived near St. Philomena Church.

Simmons also loved Jesus Christ and kept him close, Father Richardson said, encouraging those who filled the church and parish hall, where the Mass was livestreamed, to do the same.

Born on April 16, 1957, in Peoria, Simmons was the son of Jack and Patricia (Murphy) Maggio. He went to Calvin Coolidge Middle School and Manual High School, and attended Bradley University on a full baseball scholarship. He also served as the team’s captain.

He would earn a bachelor of science degree at Bradley and add master’s degrees in athletic administration from Illinois State University, and educational administration, also from Bradley, in the years that followed.

He retired from Peoria Public Schools in 2012, and joined the Peoria Notre Dame family the following year.

After being named the Diocese of Peoria’s Distinguished Principal of the Year in December 2018, he told The Catholic Post that while he didn’t regret any of the time he spent working in public schools, he appreciated being in the faith-based environment at Peoria Notre Dame. The daily 7:15 a.m. Mass in the school chapel was a priority.

“He loved to be able to be surrounded by his faith and be able to participate in the sacramental life here,” Father Lucas said.

“That was something that fueled and encouraged my own faith, as well, as a priest and as a spiritual father for the Peoria Notre Dame family,” he said. “That love for his faith was very present and that spilled over in the love for his students and anybody who came through that door. I think that is what is going to remain with me the most.”

“The love he showed toward others was true and deep. He had a unique way of making you feel important,” said Dr. Susie Cicciarelli, who worked with Simmons as his assistant principal.

“Randy always had his eye out for the underdog and the person who might feel out of place,” she told The Post. “He would embrace anyone he sensed would be eased by his embrace, whether it came in the form of a hug, a high five, or a shoulder-to-shoulder bump. He made people feel welcome and at ease even before they got a chance to feel out of place.”

Rick Pantages, principal at St. Mary School in Kickapoo, got to know Simmons while both were coaching basketball — Pantages at White School and Simmons at Kingman. He said he appreciated Simmons’ approach to the game.

“He was the kind of person that wanted to make sure anybody from his team who hadn’t scored a basket had a chance,” Pantages said, recalling that Simmons would ask him if there was anybody on his team that hadn’t scored yet. “I would tell him and he’d tell his team, ‘Go follow him and let him shoot the ball.’”

The two men finally had a chance to work together at Von Steuben Middle School in Peoria, where Pantages was a sixth grade science teacher when Simmons was named principal.

“I knew he would be super to work for — very teacher and student oriented, friendly. He would do anything for the kids,” Pantages said. “The teachers were always extremely loyal to Randy because they knew he would support them in the good times and the bad times.”

When Pantages applied for the job at the Kickapoo school in 2014, it was Simmons who gave him a recommendation.

“If I needed advice I’d pick up the phone or I would text him and he would call me right away,” Pantages said.

Dr. Sharon Weiss, superintendent of Catholic schools for the Diocese of Peoria, said Simmons was often the first one to call a new principal and say, “If you need anything, I’m available.”

“When I think of leadership, I think he is the true definition of servant leadership,” she said. “He was truly a servant. His leadership was respected.”

Weiss said Simmons always made decisions for the benefit of the students and got in there with them.

“He taught classes — he didn’t have to, but he taught classes because he wanted to be with the students, to see what they were thinking,” she said. “He was at every game, every meeting. It was just incredible, the presence that he had.”

For now, Peoria Notre Dame is being led by Cicciarelli and Tim Speck, also the assistant principal, and Sister Sara Kowal, SCTJM. A theology teacher and director of campus ministry, Sister Sara was named on Feb. 1 to succeed Simmons when he retired at the end of this school year.

Simmons married Patti Lavin on April 13, 1984. She survives, as do their children, Nate (Tina) Simmons of Peoria, Arizona, and Kate (Chad) Smith and Sarah Simmons, all of Charleston, South Carolina; two brothers, Mike (Bella) Simmons and Doug (Lori) Simmons, all of Peoria; one sister, Kathy Simmons of San Francisco, California; and two grandchildren, Jack and Nora.

Everyone who spoke to The Catholic Post or offered comments at the end of the funeral Mass said that family meant everything to Simmons. Cicciarelli said he loved going to concerts, running and taking bike rides with his wife.

On the back of the worship aid for the funeral Mass, the Simmons family said, “Randy’s love, shown through the care he provided to every life he touched, was genuine and just who he was. All of you are his legacy. The best way to remember him is to show kindness to one another.”