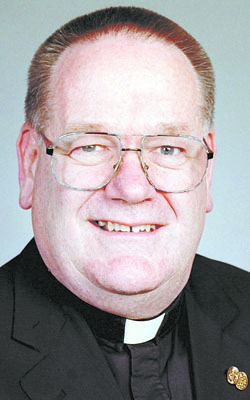 A Mass of Christian Burial will be celebrated at noon on Tuesday, Feb. 19, at St. Bernard Church in Peoria for Father Ronald E. Dodd, a senior priest of the Diocese of Peoria who began studies for the priesthood after being widowed following nearly three decades of married family life.

Father Dodd — a former pastor of parishes in Odell, Campus, Metamora, and Washburn — died on Tuesday, Feb. 12, at the OSF Richard L. Owens Hospice Home in Peoria. He was 74.

Bishop Daniel R. Jenky, CSC, will be the principal celebrant of the funeral Mass. The homilist will be Father Adam Cesarek. (Click here for the full text of the funeral homily.)

Visitation is planned from 5 to 7 p.m. on Monday at St. Bernard Church, 509 E. Kansas St., with the recitation of the rosary at 6:45 p.m. An additional hour of visitation will take place prior to Tuesday’s funeral Mass.

Interment will be at Resurrection Mausoleum in Peoria.

Born Jan. 21, 1945, in Springfield to Warren and Florence (Mueller) Dodd, he was graduated from Blessed Sacrament School and Griffin School in Springfield. He served in the U.S. Army as Military Police in the Vietnam War, receiving the Purple Heart and Bronze Star Medal.

He attended Loyola University of Chicago and then Illinois Central College, where he received an associate’s degree in 1980.

He worked at Caterpillar, Inc., for 33 years, retiring in 2001 as a senior systems analyst in information service.

He married Jean Armstrong Ihnken on Nov. 1, 1968, in Bloomington and they raised four children. She died in 1998.

After his wife’s death “I started feeling there was more that I wanted to do regarding service to the church,” Father Dodd told The Catholic Post in sharing his vocation story. At the time, he was active at St. Bernard Parish in Peoria, including its Men’s Club and RCIA program. After discussion with his pastor, Father James Pallardy, he felt God calling him to the priesthood so he contacted the diocesan vocations office.

His assignments included four years as parochial vicar of St. Columba, Ottawa, and St. Mary, Grand Ridge, and two years with the Streator Catholic parishes during the transition to the consolidated St. Michael the Archangel Parish. In 2011 he was named administrator and later pastor of St. Paul Parish, Odell, and Sacred Heart, Campus, also serving as vicar of the Pontiac Vicariate. Two years later, he was named pastor of St. Mary, Metamora, and St. Elizabeth, Washburn, which he served until being granted senior status for health reasons in March of 2015.

“My greatest joy was being able to serve the people,” he said upon his retirement from active priestly service. “Every place I’ve been there have been great people.”

In retirement, he resided first with a family member and then at St. Joseph Home in Lacon.

He was preceded in death by his parents and two brothers.

Memorials may be made in Father Dodd’s name to The Wounded Warrior Project.