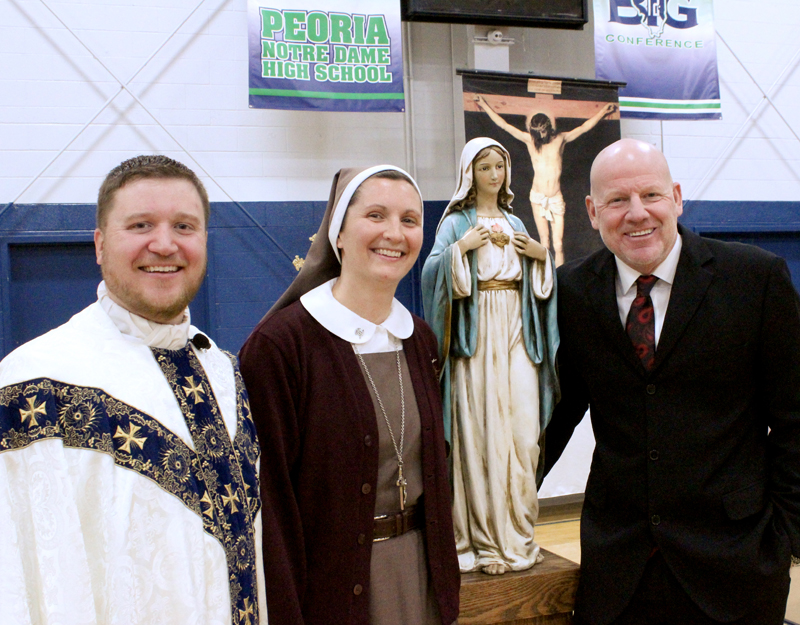 Catholic Schools Week came to an end at Peoria Notre Dame High School with a new beginning as Sister Sara Kowal, SCTJM, was welcomed as the new principal.

The applause was led by Randy Simmons, the principal at the college preparatory school for the last six years, who will be retiring at the end of this academic year. He plans to stay on as a member of the faculty, however, and will continue to teach.

“I’m her biggest fan,” Simmons said of Sister Sara. “I’m very confident she’s going to do an outstanding job at Peoria Notre Dame. They’re lucky to have her.”

Sister Sara also had words of praise for Simmons, expressing her thanks for everything he has done.

“He has been a gift personally to me all these years and, I know, to each one of us. I’m so grateful for the example he’s set as a leader,” she told the students, faculty and staff gathered for the Catholic Schools Week Mass on Feb. 1.

“He’s an awesome man who has served this school well,” Sister Sara said.

“Mr. Randy Simmons is an exemplary school leader whose skill, knowledge and passion for students and their learning is unmatched,” Bishop Daniel R. Jenky, CSC, said in a statement released to the school community by the Office of Catholic Schools of the Diocese of Peoria.

Simmons came to Peoria Notre Dame six years ago after retiring as a longtime teacher and principal for Peoria Public Schools. Named the Diocese of Peoria’s Distinguished Principal for 2018-2019, he was featured in the Catholic Schools Week section of The Catholic Post. (The story can be found here).

The bishop added that he is grateful for the vocation of religious orders in the diocesan ministry of education and said he is “overjoyed that the largest high school in the Catholic Diocese of Peoria will have a religious Sister as principal for the 2019-2020 school year.”

Sister Sara brings 12 years of experience to her new role at Peoria Notre Dame, where she has taught theology and been the director of campus ministry for seven years. She is a member of the Servants of the Pierced Hearts of Jesus and Mary. 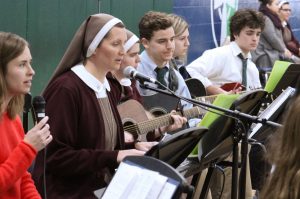 “It’s a great school. I love it. It’s a family in many ways,” Sister Sara said of Peoria Notre Dame. “It’s a place I care about deeply, so it’s beautiful to be able to continue to serve here — in a different capacity, but ultimately serving the same people.”

Administrators have always taught at Peoria Notre Dame, she said, adding that she looks forward to keeping that tradition alive.

“It may be a little less than I do now, but I still hope and desire to teach,” she told The Post. “Ultimately, that’s what I love the most.”

It was a love that developed over time for the woman who holds a bachelor’s degree in biology from the University of Michigan. While she had been considering a career in engineering or medicine, it became clear in her senior year that education was her real calling.

That took her to Florida, where she could teach as she worked toward certification. Settling in Miami, she taught science and math at an all-boys Catholic high school, adding religion after she started a master’s degree in theological studies at Ave Maria University’s Institute of Pastoral Theology.

Sister Sara’s life began to change in another way when she encountered and got to know the Servants of the Pierced Hearts of Jesus and Mary. The religious community is based in Miami.

“Religious life wasn’t even on my radar,” she acknowledged. “As I became closer to the Lord, there were some moments when that question surfaced.”

When she traveled with friends to the National March for Life on a pilgrimage led by the Servants of the Pierced Hearts, Sister Sara found herself spending time with the Sisters and talking to them.

“I realized, ‘I’m very happy when I’m with them. I’m very joyful,’” she told The Post. “I started thinking maybe I could be happy living that life.”

She opened her heart to the call and the Lord did the rest.

Sister Sara began the formal process of discerning with the community in 2006 and entered on March 25, 2007. She took her first vows on Dec. 12, 2009, and will profess perpetual vows this July 1.

The opportunity to lead Peoria Notre Dame High School was presented to her by Mother Adela Galindo, the foundress of the Servants of the Pierced Hearts, at the suggestion of Bishop Jenky.

“At first it seemed like an overwhelming task in many ways, but more than anything the Lord in prayer gave me a lot of peace about it,” Sister Sara said. “I think the bottom line is — and this is true of everything — when the Lord asks something he provides the grace for whatever that is. That simple truth is what we all rely on daily.”

She asked those present at the Catholic Schools Week Mass at Peoria Notre Dame to pray for her, saying that before she is a leader she is a follower of Christ.

“A true leader doesn’t lead people where he or she wants. A true leader first follows Christ and then walks ahead of everyone else on that path to Christ, that path to heaven,” Sister Sara said. “That’s my prayer, that I may always be that ultimate follower first, so I may lead you faithfully, every year and every day.”