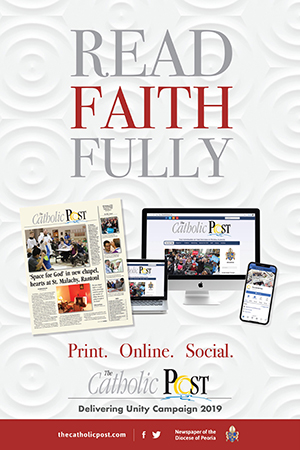 Stop reading this editorial at any time to renew or begin your subscription to The Catholic Post, if you haven’t done so already.

On second thought, we don’t want you stop reading this issue of your diocesan newspaper, because on every page is another reason to support The Catholic Post. While a polar vortex is overtaking the Midwest as we go to press this week, the newspaper in your hands comes after two weeks of what seems like a perfect storm of Catholic-related news.

Consider the stories in this issue — just one of 26 that your $30 subscription brings to your home: World Youth Day, with local pilgrims reporting from Panama; the March for Life, again with local pilgrims present, and a host of other pro-life news, including the Covington student controversy; the death of one of our senior priests; the opening of Catholic Schools Week; a horrific church bombing during a Mass in the Philippines, and much, much more.

And in mid-February, the presidents of the world’s bishops’ conferences are gathering with Pope Francis to discuss the way forward after the recent wave of abuse crises.

The secular press will cover some of those stories. So might often hysterical social media outlets. But the Catholic press, including The Catholic Post, will do so with both high journalistic standards and a love for the faith.

We pledge our best efforts to serve you faithfully so that you can read faithfully throughout 2019. — Thomas J. Dermody